Does using a resistor in series on a breadboard track work as expected?

I've read up on Kirchhoff's laws of current, however I'm not certain how it applies in this case. I have 1 10K resistor in series on a breadboard track. Considering that electrons flow the path of least resistance, part of me thinks that electrons could flow on the rail below the track, skipping the resistor and outputting full current.

Here's an image of what I'm talking about: 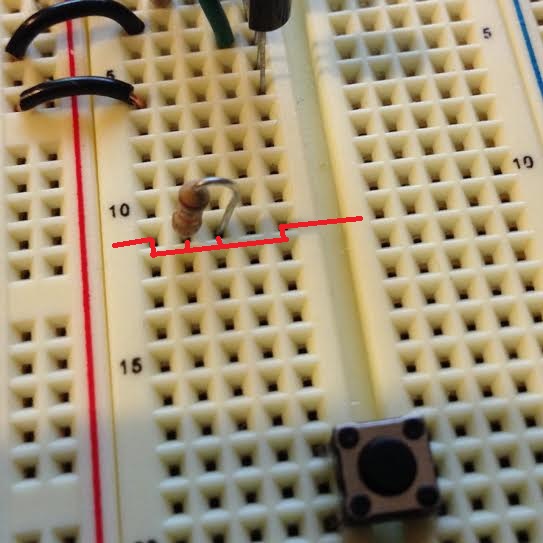 It's almost like the resistor is a parallel circuit of its own, however it doesn't run to ground. So, would the rail + resistor be one and the same? I know for sure if I hopped the resistor over the bridge in the middle that all electrons would flow through the resistor, yet I can't say for sure in the other case.

Yes. Essentially you have a 0.0Ω* resistor (The Breadboard wire trace) parallel a 10k resistor. Therefore the equivalent resistance will be 0.0Ω.

(Non-Zero, insignificantly small resistance that can be assumed to be Zero Ohms for this illustrative purpose) 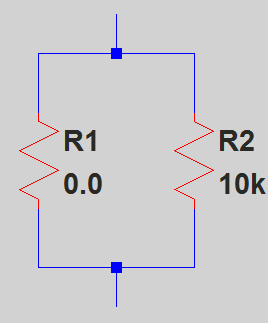 It's almost like the resistor is a parallel circuit of its own, however it doesn't run to ground.

Forget "ground". There is nothing special about "ground" whatsoever. It's just another node in the circuit, just like all the other ones.

Are these circuits any different?

What is that "ground" thing anyway? I have batteries and LEDs and resistors in my parts drawer. But I don't have any "grounds".

As such, the resistor as you've stuck it in the breadboard isn't "like" a parallel circuit. It is a parallel circuit. There's no requirement for "ground" to be involved. The laws of physics have nothing to do with "ground". Ground is simply a notational convenience which makes the schematic easier to draw.

No, that's not going to work as you want it to. That breadboard track is like a wire. A resistor across a little bit of wire does nothing. From end to end of the track, you still have a wire.

That wire does have some finite resistance, so some infitesimal portion of the current will flow thru the resistor and not the metal of the track, but that won't matter in any practical or even reasonably measurable sense.

If you want to insert a 10 kΩ resistor in a current path on such a breadboard, you have to place the resistor between two separate tracks, then arrange for the current to go into one track and out the other.

Think of each track as being a blob of solder on a board that you can connect up to 5 things to. You put components between the blobs for them to matter. Connecting both ends of a resistor to the same blob does nothing other than use up 2 of the possible 5 connection points.

All pins in that row on the breadboard are connected, so yes, that resistor does nothing as it is shown. If you were to put 5V into that track as well as ground, it would just short straight from 5V to ground. You basically shorted the resistor with the breadboard.

Well for all intents and purposes you could assume there is negligible current that is flowing through your 10K. In reality current will flow through all paths, it's just that only a very tiny, tiny amount will be flowing through the 10K while most of it flows the very low resistance of the metal track below.

Not the answer you're looking for? Browse other questions tagged resistors kirchhoffs-laws or ask your own question.

0
How does a burden resistor work?
3
How to get a variable voltage from a variable resistor
1
Some Basics of a Potentiometer?
1
Effects of a Resistor
1
LED circuit is draining AA batteries REALLY fast
0
What resisters for inverting op-amp should I use?
1
Can I use a Dupont cable with a resistor soldered in the middle as a pullup resistor for I2C comms?
2
How does my breadboard circuit diagram look? Is my circuit going to explode?
0
Does a series resistor limit power consumption?
1
How does KVL work in this circuit?