I've been successfully using the USI on an Attiny84 to talk SPI to a radio module. This is good for hacking up sensors and whatnot as little radio devices. My next sensor project involves a sensor with an I2C interface. I know the USI can talk I2C as well, but I'm already using it to talk SPI to the radio.

I know the USI itself has mode bits to switch it from three- to two-wire mode, so I could have it talk SPI or I2C. But how might this interact with external hardware? When it's in I2C mode to talk to the other device, the SPI device's SS line is deasserted, so the SPI radio will just ignore it. But when it's in SPI mode to talk to the radio module, surely the data and clock lines will be such that the I2C device thinks a transaction is ongoing? Anything I can do to prevent this?

Some ideas I have:

Each of these uses at least one other GPIO pin though, and I don't have many spare. Can I do it a nicer way? E.g. some order-guaranteed way of working the lines when in SPI mode, so that I2C never sees a "START" condition?

Has anyone else ever successfully mixed these?

You could use an SPI to IIC bridge like this device. 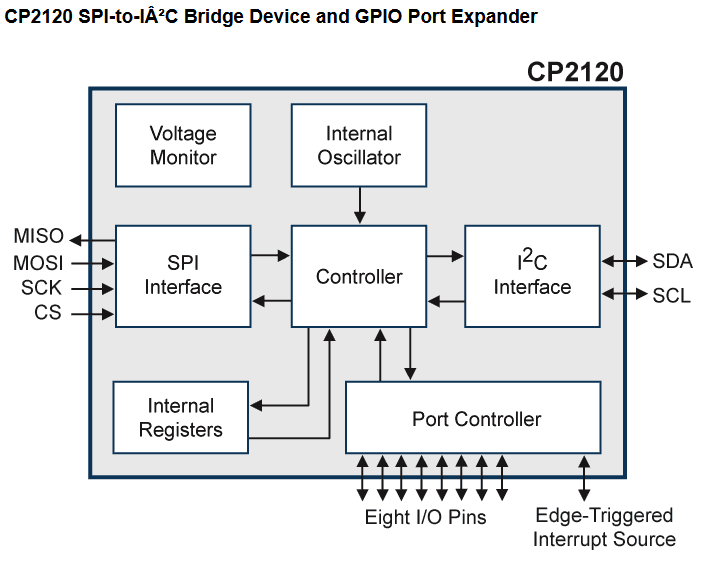 The solution I settled on was to use a single-gate version of the 4066, namely a 74VHC1G66 (which is a tiny SOT-23-5 part) as a transmission gate to link the SDA part of the I²C bus onto the appropriate pin of the USI module.

The transmission gate's control input is active-high, which means I can control it from the slave-select line of the SPI chip. When the SS line is high, the gate is conducting and I²C will work through it (bidirectionally) while the SPI chip ignores it. When the SS line is low, the SPI chip is paying attention to the line now working in SPI mode, and the I²C chips don't see anything because the gate is in high-Z state, and the pull-up resistor on the SDA line keeps it high.

This is an easily-extensible arrangement if more than one SPI slave is added, because they can be diode-ORed together with a pullup resistor on the 1G66's control line.

You can mix a SPI and an I2C bus on the same four pins (with no additional hardware) if you only have one SPI device.

Keep pin 3 and 4 static, and then talk over I2C as normal.
The SPI device will see a chip select but no clock so nothing will happen.

In order to talk over SPI, just use the SPI bus as normal.

Note that unless you are trying to create an I2C start or stop condition you must take care to never toggle pin 2 while chip select is high.

While the chip select is low the I2C device will just see a clock stretch since the chip select is shared with the I2C clock. It will ignore all the data transitions on the data pin because it is only supposed to latch data on the rising edge of the clock, and even then only after having seen a valid start condition.

43
How to connect multiple i2c-interface devices into a single pin A4 (SDA) and A5 (SCL) on Arduino?
12
BMA180 accelerometer. How does it manage to share pins between I2C and SPI?
1
Arduino I2C and multiple devices
3
I2C and SPI on the same bus
4
I2C communication won't start unless SDA pullup resistor is reinserted
23
Why I2C designed to work with pull-up resistors and not pull-down ones?
2
Can SPI and I2C be implemented using GPIO pins?
0
I2C Bus getting Locked UP on Single Master - Single Slave System
0
Discovering and configuring Si5332 via i2c