I want to ask if there is differences between this two circuits:

I ask this questions becouse in different schematics like this: 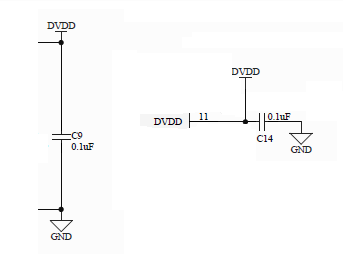 Decoupling caps need to be physically close to the pins they are decoupling. This also means every power pin needs its own decoupling cap. Since the values of all your decoupling caps are the same and are small, what you see is probably due to the IC having more than one power pin. This is common with large digital ICs, like FPGAs and microcontrollers.

Sometimes you see two caps for a different reason. One of them is a decoupling cap and the other is meant for lower frequency "bulk" storage to ride out short power glitches and the like. The first will be a small ceramic usually in the 100 nF to 1 µF range and physically close to the power pin. The other will be a much larger capacitance, often electrolytic, and can be farther away like at the power entry point of the board. The electrolytic is no good at decoupling because it has poor characteristics at high frequencies, but it does have much higher energy density.

Sometimes two true decoupling caps are used in parallel. This is usually for RF or other high frequency applications. No capacitor is perfect, and every real capacitor only works like a capacitor below some maximum frequency. Smaller capacitors usually work to higher frequencies. Sometimes you will see 100 nF in parallel with 100 pF or 1 nF. The extra capacitance from the second capacitor is irrelevant, but it brings lower impedance at higher frequency, which the larger cap can't do.

The basic idea is that they are in parallel, however they are possibly located at many different places on the PCB, but not always.

Some schematics will show several capacitors all together in one place, and you don't really know where they are physically located. This is very common on VCC and other power lines. For very complex schematics a designer might do this so that other areas of the schematic don't become overly cluttered by too many parts. On the actual PCB there can be a few capacitors at the power supply entry points, a few scattered around the board, and a few right at chip power pins (as by-pass caps).

There can be a number reasons for the different physical locations. One is because PCB traces are not perfect, they can have small resistances and inductances. You would want to place the caps in locations that work best with those small imperfections.

Placing caps right at the power pins of a chip can reduce noise from getting out of the chip and causing problems further back on the trace, even though the trace might already have a large cap at the opposite end.

Other times you may see a large value cap and a small value in parallel, this may be because the component they filter require special conditions that can only be satisfied by mixing different types of caps. For example a cap with low ESR might not have a high farad value, but you need both, so you would place a large value electrolytic cap in parallel with a small ceramic cap (which often has a low ESR).

On some very high frequency boards you might physically see two small value capacitors at both ends of a short trace. In this case the trace may be purposely used as a small inductor. The schematic for these boards will sometimes shows the caps separated with an inductor, but you won't see a normal inductor on the board.

The thing about schematics is they do not necessarily reflect the physical layout and location of components. It is likely both capacitors are necessary but are located in different areas of the physical layout to protect each area from voltage drops and transients.

Not the answer you're looking for? Browse other questions tagged capacitor schematics decoupling or ask your own question.

2
If two components on same net both require capacitor do I need to put it twice?