Is Power consumed by a motor under various load conditions constant?

What I think is that, Power drawn by motor should increase as we increase the load on motor.

But, someone told me that Power drawn remains constant.For example a 10 kW motor will always consume 10 kW irrespective of load on it.He said power consumed is P=3 VIpf (pf=power factor) for a 3 phase induction motor.As load increases current I increases but Power consumption remains constant as V ,pf change to compensate the increase in I in order to make power remain constant.

When you apply a voltage to a motor, the resulting motion generates a "back ElectroMotive Force" against the coils; its rotation feeds back a resistance that regulates the current, in proportion to the motor speed.

If an external load reduces the speed of the motor, that "back emf" is reduced (the resistance of the motor decreases), increasing current in order to maintain the voltage, and thus power increases.

"For example a 10 kW motor will always consume 10 kW irrespective of load on it. He said power consumed is P=3 VIpf (pf=power factor) for a 3 phase induction motor".

If this would be the case, motors as we know now would probably not exist.

Since V is constant, the product (I x PF) must remain constant as well. As the power factor varies between 0 and 1, the motor would run at a ridiculously low PF at full load. You could only have solved this if motors would be incredibly over-dimensioned or PF would have come standard with every motor.

At steady state, the electrical power input to the motor is exactly equal to the output mechanical power at the motor shaft, minus any losses.

You can arrive at this conclusion by considering the conservation of energy. If the amount of power input to the motor were more than the amount of power being taken by the load, the extra power would have to be going somewhere. (In real life, excess power is stored as kinetic energy - the motor accelerates.) 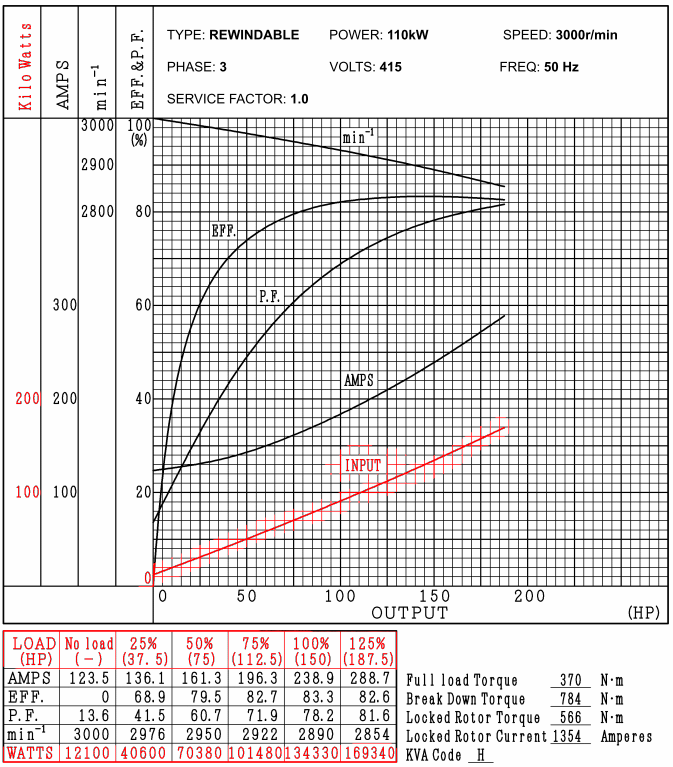 You are right and someone is wrong. a motor with no load draws little current and also has a low power factor. when loaded he power factor increases and current draw increase.

power consumed is a slippery term, for example the first law of thermodynamics puts it at 0

motors produce heat mostly by electric resistance, so heating is proportional to the current flowing through the motor, current is basically proportional to torque, so that increases with load too.

Put a large motor like a vacuum cleaner or a circular saw on a long enstension lead with an incandescent lamp. at night start the motor up and you'll see the lamp dim and then brighten again, this if proof that he motor poses a variable load. A similar experiement can be dome with a pocket fan motor flashlight globe and a 10 ohm resistor in series with the battery. (slow the fan by hand ans watch the lamp dim)

About the only thing likely to be constant is reactive power

Power consumed by a motor = power required by the load + losses. So you were correct.

The confusion that your "friend" has may be related to the fact that a PORTION of those losses in the motor are fixed, meaning there are losses associated with just making the chunks of iron and strands of copper act like a motor at all, and those losses remain the same regardless of loading on the motor. So as the load on the motor decreases, even though the QUANTITY of power lost decreases with the load decreasing, the PERCENTAGE of total load that those fixed losses represent does go up.

So for a rough rough example let's say you have full load on a motor that is drawing 1000W with 100W of total losses, and 10W of that is fixed losses in the motor, so 10% of the losses are the fixed losses. If the load on the motor drops to 500W, and the losses drop to maybe 60W, but that 10W loss in the motor itself remains constant, that 10W represents 17% of the total losses now, instead of 10%. That sort of issue gets some people confused into thinking that the actual total power doesn't change because "losses increase". It is a RELATIVE increase in PERCENTAGE, not an ACTUAL increase that takes place.

Not the answer you're looking for? Browse other questions tagged power motor dc-motor induction-motor synchronous or ask your own question.

0
Why do we need to install a variable frequency drive to reduce the energy consumption of a motor?

2
Effect on loading a DC motor - load torque
1
Which informations do I need to calculate the efficiency and horsepower of a 3 phase induction motor?
2
Can I drive a three phase induction motor with this method?
0
Energy Consumption of AC Motors with same capacity and same hp
1
Speed Current Relationship in İnduction Motors
0
RPM of 100% Efficient Motor?
1
How does the RL series circuit model the effect of load/backemf in an induction motor?