I am trying to make an IR transmitter, and have the following set up: 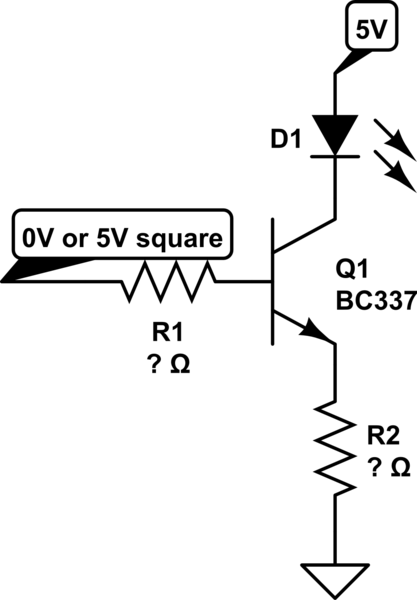 I was thinking of this circuit, because I want to run through the LED ~700mA with 20mA output from the microcontroller. And putting R2 at the collector would mean a lot of power wasted by R2, doing this I am hoping to minimize that.

However the problem is I want to put the BJT into saturation mode of operation using this configuration. I found this table on wikipedia, that shows what voltages should be applied to what contant for different modes of operation: 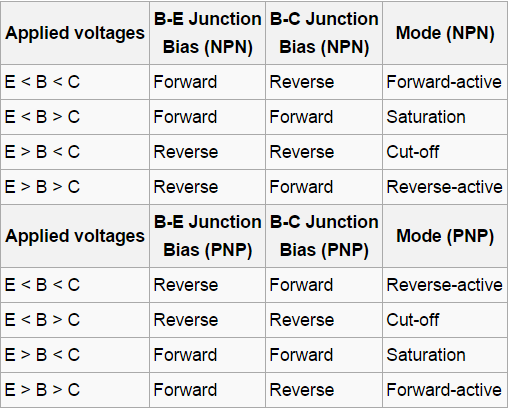 I can understand the table, but have problems calculating the resistor values. Here's what I do know (for saturation):

Using these values how can I calculate resistors needed to put the transistor into saturation mode of operation?

Could you provide more general details about the calculations, that could work for any mode of operation.

You are using the wrong topology for what you are trying to achieve. Here is a better circuit:

I agree with Olin on the better transistor configuration, but having done exactly what you've done so many times, I'd encourage you to consider a MOSFET circuit instead this time, unless the BJT is an absolute requirement. Honestly, I've used BJTs for everything switch related forever out of simplicity, familiarity, and having a huge surplus of them. But I've come to see that MOSFETs are often a much better choice, (partly thanks to @OlinLathrop ) and they are usually dirt cheap too. Look at this example, which is similar to what you're doing. 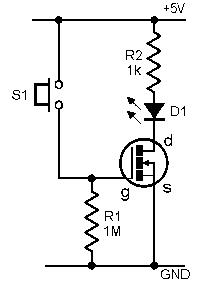 The reason I would do it with a MOSFET now is because like you, I wanted to put the BJT transistor into deep saturation to get it to maximally behave like a switch, to minimize dissipation. But the fact is, the transistor in this case is still going to have to dissipate at least 1/2 watt or more all tolled, and that assumes your square wave duty cycle is 50%. If heat or efficiency are of any concern to you, a MOSFET will be a much better choice. Here's a little N-channel MOSFET (actually called a hexfet) at mouser.com, an IRLML6246. It may be overkill for your app, but just consider how this little 50¢ device can switch up to 4 amps for you, with such low "on resistance" that it would dissipate only 28 milliwatts in your application.

The other consideration, I don't see that you mentioned the drive frequency, which will be a consideration regardless of whether you use a FET or a BJT, and whether you care how harmonics beyond the fundamental frequency. For that particular FET I mentioned, the turn on delay time is about 4nS, and the turn off is 11nS. Adding those and taking the recipricol, that should make this FET good to at least 60kHz. (you might speed the off time with a lower resistance from gate-source).

2
Terminology for BJT “regions of operation”

0
in saturation of BJT, the current gain is reduced
12
Designing a BJT Amplifier given some constraints
1
Common emitter characteristics in the saturation region
0
Current in Saturation and Active regions of BJT
1
How is this BJT in saturation?
2
Terminology for BJT “regions of operation”
3
Question on BJT operation mode
0
BJT Switch Design question
5
BJT Voltage Divider Bias Circuit problem