Cost Effective Solution to using PAM8403 as a headphone amp

I've just bought a PAM8403 pre-built circuit board for $1 on eBay, I was going to use it to drive a set of headphones but I neglected to consider that this is a Class D amplifier and will not take kindly to connecting the -ve output terminals together (since headphones are typically 3-wire, unless you have a set of very expensive balanced headphones).

So my question is, is there a cheap solution to connecting the two -ve terminals to drive a pair of headphones without rewiring the headphones themselves? In particular is there any arrangement of inductors and capacitors that will allow the negatives to be commoned?

I am aware that I can use two 1:1 Audio Isolation Transformers but the cheapest I can find these are about $5 each which is not ideal.

I have a feeling that it is possible to connect the two negatives together with some sort of LC filter but I'm thinking that it will probably greatly reduce the usable power output of the PAM8403 chip amp which is already quite low. I would like to hear anyone else's thoughts / ideas?

As mkeith says, it may not sound as clean as a linear amplifier, and you have to remember that headphones are a lot more sensitive and can be a lot more critical of low level distortions than loudspeakers.

However if you still want to use it, here's how.

Realise that 3W is waaay more power than you need for headphones - so is 0.375W. I'd go further and say that these power levels can be dangerous. 115dBa through speakers is wall-shakingly, cup-sliding-off-table, stomach-hittingly loud. Loud.

The same level - measured with B&K SPL measuring apparatus) from headphones - without all these other cues - sounds ... well, a little bit loud. And that's probably under 0.1W with many headphones.

In either case, the Health&Safety Executive (UK) recommendation of 90dBa safe exposure over an 8 hour working day, to protect your hearing, translates to listening to 115dBa for ...

Without all the other cues, headphones can leave you quite unaware of the danger. The fact they go so loud and stay clean and undistorted doesn't help.

So it's OK to use this amp below its full power rating.

Now - the PAM8403 datasheet doesn't say what's actually inside it, but it's a reasonably safe bet that it's a full bridge for each channel. As Out_L+ is driven positive, OUT_L- is driven negative, and so on, giving you twice the voltage and 4x the power that a half-bridge will do. (With no input signal, both outputs will sit at half the supply rail ... check this with a meter).

So I would simply ignore OUT_L- and use OUT_L+ as a half-bridge (a normal push-pull amplifier). You will need to AC couple the output via 10uF (maybe 47uF would extend the bass a little) but then you can simply return the common GND from your headphones to GND. 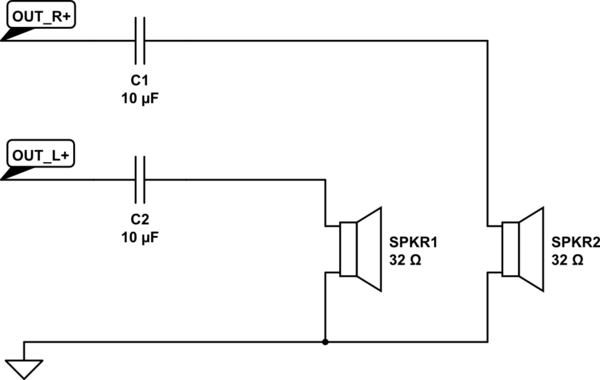 It can't damage the amplifier and if you have all the bits it costs nothing to try.

An alternatative plan would be to place some sort of protection or load on the amplifier. Connect the positive outputs to the left and right headphone and place a four ohm resistor in series with a capacitor (around 200uf) for each channel. The four ohm resistor will limit the current coming out of the negative output and the capacitor will remove any dc component. I haven't tried this but it should work. You may need to experiment with the capacitor value so you have good low frequency response. A 47uf cap may do the job, but I don't know. 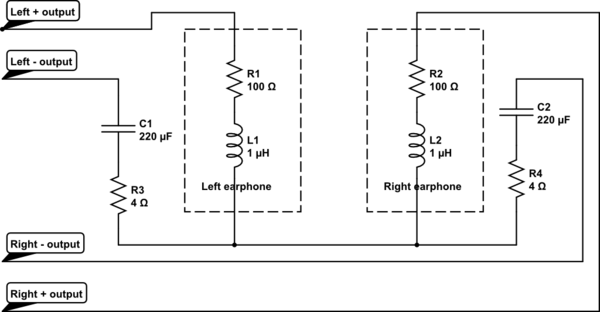 people. I used the PAM8403 with phones using this circuit:

0
Possible causes for sore ear when using audio amplifier (PAM8302A) and speaker at a reasonable volume
0
How can I connect two audio channels (L+ L- and R+ R-) to a jack (L, R, GND)?

2
Help with PTT circuit for icom radio
19
What wattage should a headphone amp be?
0
TDA2030A gain reduction for Headphone Amp
1
Wiring a 3.5mm Audio out jack where Speakers were previously
0
pam8403 using low wattage speaker
1
How to check the power output of home amplifier speaker terminals?
0
How to make a two channel mono mixer with in balance control into stereo output
0
Eliminating humming from switched audio jack