I digged up some capacitors from amplifier and decided to test them, one of them is said to be 8200 uF, the other 4700 uF.
I measured them with LCR meter and it gives very strange numbers.
If LCR meter tests on frequencies 1-100 kHz the LCR meter reads 0L, if LCR tests on 100-120 Hz then it reads around 3 mF for 8200 uF cap(yes, milliFarad, so more than two times less said capacitance). For 4700uF it reads pretty close on lower frequencies, but on higher it is still OL(starting from 1 kHz). I tested the capactiros for short-circuit - no problem.
LCR meter reads small capacitors without a problem.
What is going on? I've seen this before, but I thought maybe the capacitor is dead, but now it comes again. And again with quite big capacitors. The don't have buldges and have no damage.
I usually don't use such big capacitors, so maybe I measure them in wrong way, but I don't have any kind of special mode on LCR meter for big capacitors.
Caps are electrolytes of course.

UPD:
So the main questions:
Why LCR can't read anything on frequencies higher than 1 kHz for big caps(more LCR meter related quesiton).

*SOLVED - Is it possible for cap to drop it's capacitance to more than two times less? I usually seen capacitance drops for 20-30% for very old caps.
---I found out it is most probably broken capacitor, because other caps I have seem to be within reasonable decrease range. 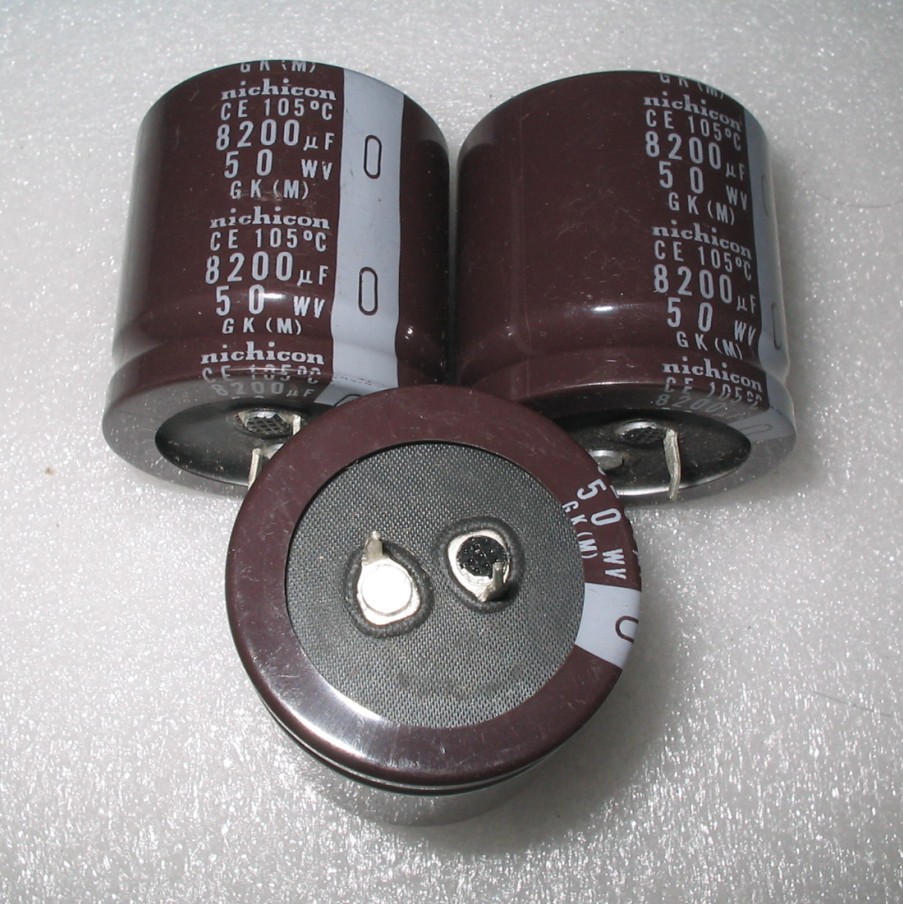 Very large electrolytic capacitors are generally used at relatively low frequencies (below 1 kHz) to smooth fluctuating DC voltages such as in power supplies. At 100 kHz, the impedance of an 8200 uF capacitor is less then 1 milliohm. This is very difficult to measure accurately considering wire resistance and the effect of parasitic capacitance and inductance that are inherent in the construction of the capacitor and have significant impedances at 100 kHz. This is why the capacitance of electrolytic capacitors is usually specified at either 60 Hz, 120 Hz or 1000 Hz. It is also why electrolytic capacitors used as bypasses on high speed IC's are almost always placed in parallel with a much smaller capacitor that is more effective at high frequencies.

Generally, the bigger the capacity, the more pronounced its decrease with rising frequency.

But this is only valid for capacitors with basically the same chemical and mechanical implementation. The way the package is contacted has considerable influence on the parasitic inductivity of the capacitor, which is the primary cause of loss of capacitive behavior at higher frequencies. But the chemistry is limiting the usefulness of a capacitor too. If the electrons cannot move fast enough, the capacitor will be bad at higher frequencies.

This is not limited to electrolytic capacitors, multilayered ceramic capacitors will exhibit this behavior too, which is why they are mainly used as buffers, not as filters. If measured with an LCR meter, they will show horrible results, even at just 20Hz, which is why manufacturers usually require them to be measured by the delta-charge method multimeters use.

Some LCR meters have a frequency sweep function that can show the capacity over frequency. I have measured a few capacitors, all 1mF@16V: Panasonic FR-A, EB-A and FR-A Low ESR, all new and unused, an old Jamicom 016C2 capacitor after a few years of use, and another Jamicom that almost vented, compiled into the following image in that order (and looking at the results, I think I'll have some choice words with the supplier of the EB-A):

As you can see, all capacitors except the last, broken one start out at similar values, which is about what a multimeter would show, but then they proceed to diverge a lot. For comparision, a high-impulse foil capacitor would show an almost horizontal line. However those are a LOT bigger (and more expensive) than electrolytic ones.

Disclaimer: I work at Sourcetronic and those sweeps were made with one of our LCR meter models.

I would like to answer myself.
The LCR meter reads lower capacitance with the increase in testing frequency, on small caps(like below 470 uF) you could get some measurement even on 100 kHz frequency test. But when the capacitor is big enough(I suppose more than 2 mF) then LCR meter can't read much from it on high frequencies, so you basically need to test on 100-120 Hz. That's probably has to do with charging time and how LCR calculates the capacitance, but that's I suppose big technical topic of LCR meter circuitry and I'm not going to guess how it does this.
So if you have the same problem - drop your testing frequency as low as possible, note that on most meters 1 kHz is default, go to settings and change it. Anyway you would probably use it in DC circuit or 50 Hz circuit so you should not really care much about what happens at 100 kHz with this thing.

Capacity loss this is possible for two reasons. a) This electrolytic Capacitor stayed unused for several years. This can recover, if gets powered at max named voltage for 10 ~ 20 minutes. b) This electrolytic Capacitor become internally dry due nearby heat sources. An sound amplifier this working for hours becomes a true electrolytic capacitors toaster. Such capacitors gets heavily damaged while externally they do look intact. Handheld LCR meters them are economic versions of bench top LCR which those worth several thousands of Euro. Handhelds due their limited PCB dimensions,they do have limited measuring range.

Not the answer you're looking for? Browse other questions tagged capacitor measurement capacitance failure electrolytic-capacitor or ask your own question.