Turn a mains light on slowly

I've been looking at creating a simple circuit to slowly turn a halogen daylight bulb on over about 30 minutes as soon as power is supplied to simulate dawn.

I've got a 240VAC 42W halogen bulb that will be used in conjunction with a 7 day timer socket. I've been looking at various triac and triac opto driver (MOC3020) circuits to try and find one that will do this but they all want to be really fancy and use microcontrollers or other such things to do far more than I need. I just want a simple circuit that will brighten the bulb over a set time (30m) when it is turned on by the timer socket.

Help with values and component ratings would also be greatly appreciated.

Thanks for the responses. Further to this; size and heat dissapation are factors for this circuit as it will need to fit within some sort of lamp holder, also when I have looked at the triac solutions they all talk about chopping the ac waveform and doing from the zero crossing point to provide a smoother operation which made me think of the following:

Is it feasible to chop the ac waveform with a pwm at a higher frequency (5kHz)? Would this make it buzzier of lessen the buzzing or is it just totally unnecessary?

The basic circuit is pretty simple. C1 charges through R1 and turns on the triac when the threshold voltage of the diac is reached. 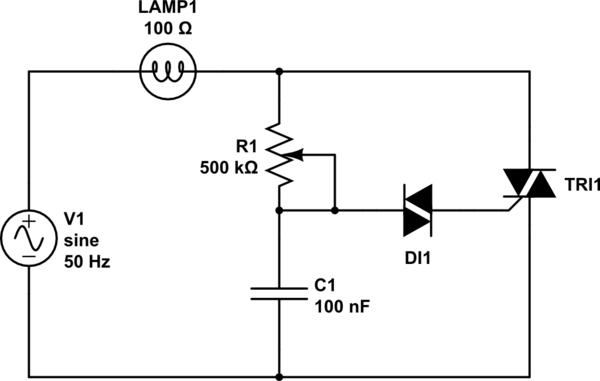 Now you've got the choice over how you vary that resistance with time. ThreePhaseEel mentioned the excellent idea of using a Negative Temperature Coefficient resistor (aka the common thermistor), tied somewhere near the lamp. Note though, that the lamp will not light up linearly with time as NTCs' resistanceVStemp is a decreasing exponential. This might be a problem.

The first thing that pops into my mind would be a 555 timer in astable configuration supplying a clock to a 555 in PWM configuration, with the modulation input being the charge of a capacitor (either through constant current or within one time constant to make it linear). The output of the PWM 555 could be either optocoupled to a MOSFET or directly tied to a solid state relay. However this sounds like overkill. If you prefer simplicity over cost effectiveness, you could replace the 555 with a microcontroller, which gets everything down to wall DC adapter-uC-optocoupler-gate resistor-MOSFET. Still, sounds like overkill.

I personally like ThreePhaseEel's solution, and I'd like to hear that someone else has an idea as simple that makes the lamp light up linearly. 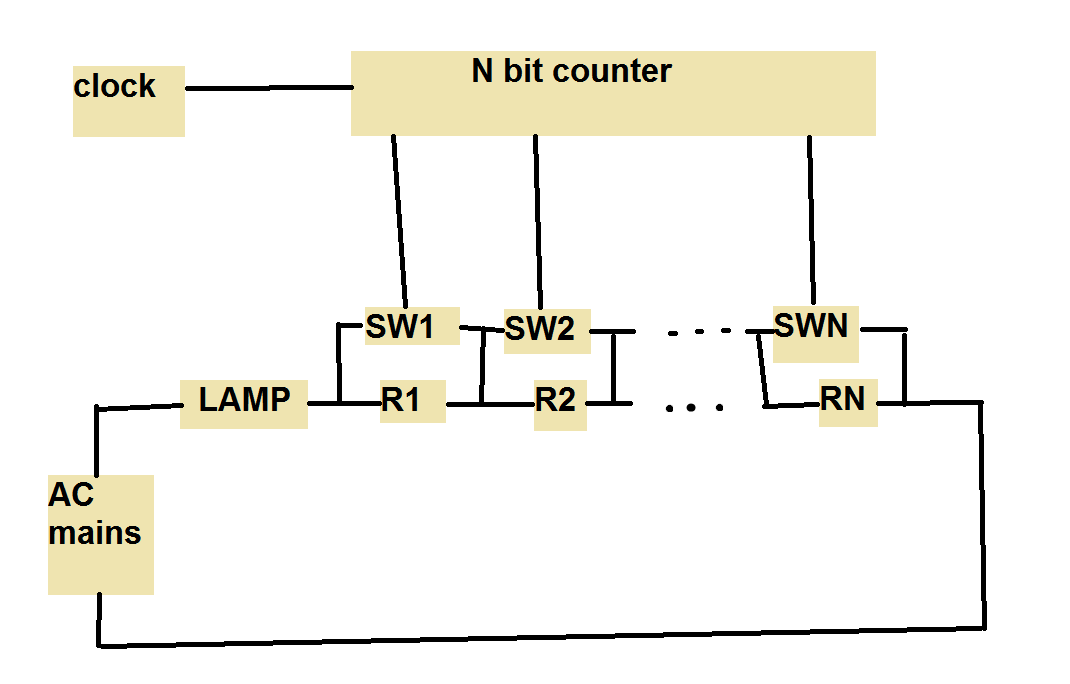 If you aren't space constrained, grab a counter like this. Hook each bit to control some isolated switch, relay or otherwise. Run each switch over a high power resistor. Tweak resistors and clock speed according to preferences. You now have a digital dimmer.

Not the answer you're looking for? Browse other questions tagged ac timer light mains triac or ask your own question.

9
Current limiting at mains voltage
6
First mains-powered project - best practices?
3
Power LED light from battery when mains fails
0
Turn a mains AC load off when another one is ON
2
How do external circuits in light switching units (such as Lightwave RF) use the mains wiring for power?
31
Can I turn Radio waves into light?
2
TRIAC won't turn on
0
2 pin mains connector
2
Mains AC overvoltage protection using a TRIAC