Can you use a single Bipolar Transistor as an AND gate?

I have recently began electronics as a hobby, and I am curious about the use of Bipolar Transistors in AND gates.

Simply put, if I was to use the collector and base as inputs, and run small (~1 volt) currents through them, could the single transistor function as an AND gate, even if the base and collector voltage were approximately equal?

I think that might be possible if you use emitter and collector of an NPN-transitor as inputs and connect the base to the +Vcc through a load resistance. This creates a wired AND-gate. If you make the E low, it will also draw the C input low bit that's not necessarily a problem except that it prohibits gates to be connected to multiple inputs. It also inconveniences testing, but other than that, it seems possible to me.

Ignoring some of the obvious mistakes in your question (like confusing the units of current) and trying to take this seriously, the answer is no.

You need to first define what it even means to be an AND gate in your context. What is a logic-0 in your case, or a logic-1? Concrete implementations of logic gates exist in the real world where actual voltages (currents) must be described if you are to ascribe any semantic meaning to a "1" or "0".

If you take the collector (A) and base (B) as inputs you will need the emitter (Y), the output, to behave as described in the table and that is not the behavior of a Bipolar Junction Transistor (BJT). The name explains why. BJT means "a transistor created by two shared junctions". These junctions behave like diodes and therefore have a very non-linear forward voltage curve. This has the effect of locking the base and emitter into a relationship that allows at most only a very small voltage difference between them. So your output is not conditioned on your second input and therefore it cannot serve (alone) as a 2-input gate.

I don't understand this (even tho I did 2 years of EE in college). I think the key thing I don't understand is why the relationship you mentioned between the base and the emitter (very small voltage difference between them) has the consequence of having the emitter "not conditioned on your second input". Are you saying that if the base is on, the emitter is on too, whether or not the collector has current?

This statement, again, doesn't really make any sense. What does "base being on" mean to you? "on" describes current flow in a two-port network -- that means, between two points. You're only describing one point, the emitter or the base.

Notice something here? Absolutely no relationship to any current or voltage the depends on the collector. The base to emitter relationship is that of a diode -- a two terminal device.

This is reflected in the simplified model of the BJT when forward-biased: 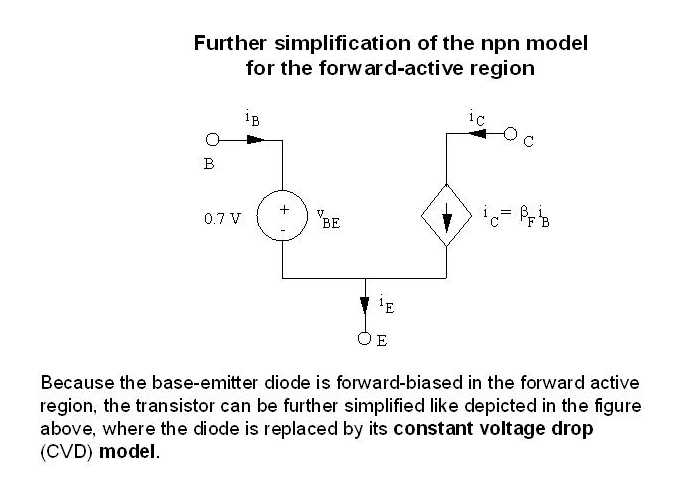 Yes, you could if you use the two intrinsic diodes of a NPN transistor for a Diode Resistor Logic AND gate:

...but I think it's not a good idea (e.g. because BE and CE diodes have different characteristics).

My main experience with transistors was in my teens way before the internet came to our homes, but I didn't see why this couldn't be done, so I gave it a go. I bought cheap NPN transistors, resistors and LEDs from ebay (so can't give you exact specs) and wired them to my Raspberry Pi.

See http://www.megaprocessor.com/stepping-stones.html for how transistors work.

3
In a BJ-Transistor, why do we need to bias the junctions?
2
PUT Base Resistors Question
7
FET vs bipolar junction transistor
0
Can I use 1 resistor for both inputs of an RTL NOR gate?
0
How to connect the emitter of a transistor to the base of another transistor? (PNP)
1
XOR with 3 different OR gates
1
How can output from a single logic gate/DIP switch supply input for multiple gates?
1
When do I need to use an OR gate IC?