I can't get a meaningful output from a circuit in Thomas & Moorby's exercise 2.7

I'm working out the exercises in "The Verilog Hardware Description Language" to learn Verilog. I'm currently stuck in exercise 2.7, and since I couldn't find anything on the web about it I thought I'd rather ask here.

I'm implementing this in Vivado and trying to simulate it, but I think the output is always zero. The exercise asks for a description using different techniques of the FSM represented by this circuit: 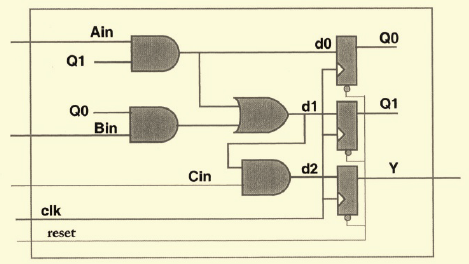 This is my current code for the circuit, which I'm testing with a test bench that correctly simulates a clock with a period of 20 time units.

When I simulate the code Y is always 0, no matter what combination of inputs I try and keep high during many clocks. I'm issuing a reset first. Vivado currently builds this RTL representation that looks just like the diagram in the book:

Am I misunderstanding something? Is this the correct behavior of the circuit?

2.7 Write a description for the FSM shown in Figure 2.7 with inputs Ain, Bin, Cin, clock, and reset, and output Y.

A. A single always block

B. Two always blocks; one for the combinational logic and the other for the sequential.

C. Oops, this circuit is too slow. We can’t have three gate delays between the flip flop outputs and inputs; rather only two. Change part B so that Y is a combinational output, i.e. Move the gate generating d2 to the other side of the flip flops.

D. Simulate all of the above to show that they are all functionally equivalent. 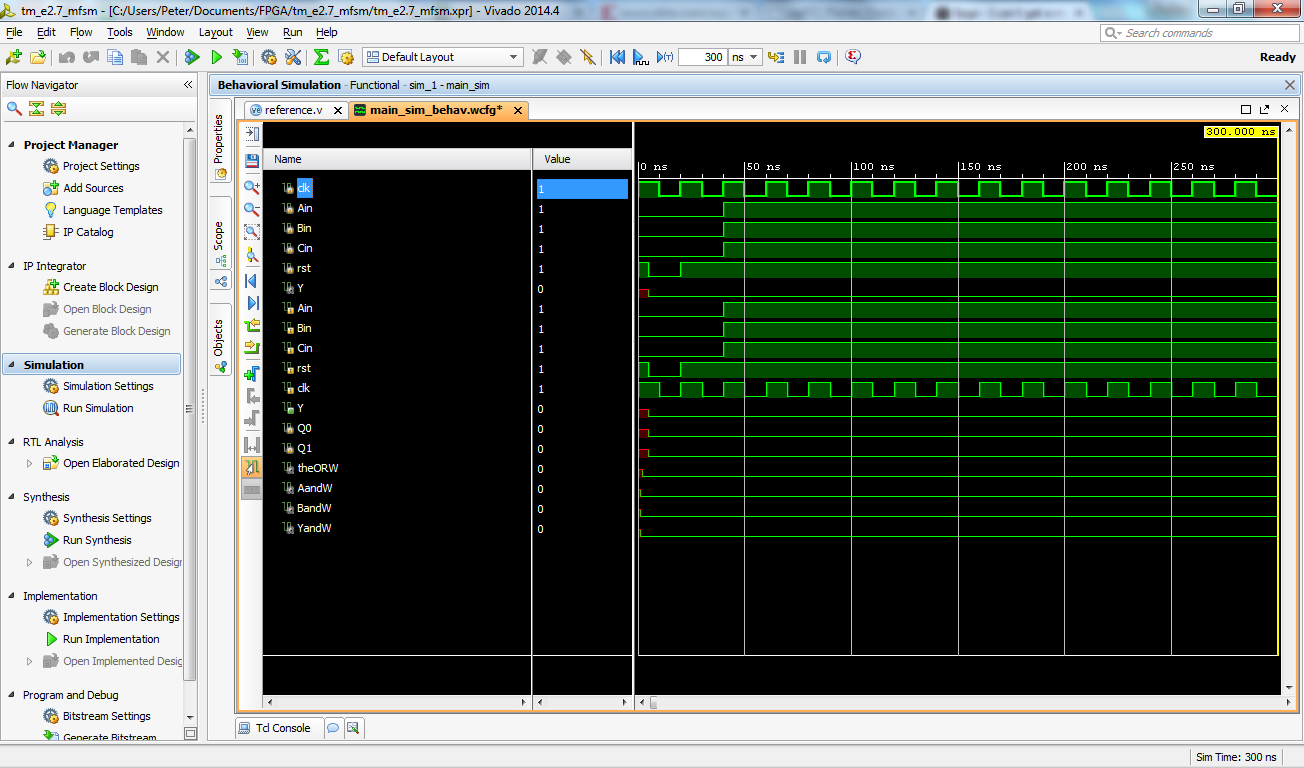 Just from inspecting the logic diagram, I don't see how the original FSM can ever get out of its initial state {Y,Q1,Q0}=3'b000, regardless of its inputs. Are you sure 3'b000 is the correct initial/reset state?

When Q1 is 0, the Ain input is effectively disabled, because anything AND 0 is 0.

One other thing: the test bench would be more useful to you, if it tested various combinations of the inputs.

Not the answer you're looking for? Browse other questions tagged fpga verilog vivado or ask your own question.

15
Difference between blocking and nonblocking assignment Verilog
1
Help needed with SPARTAN-3AN FPGA frequency doubler
1
Can I use an AND gate before a clock input?
2
Dividing a clock in Verilog - is it OK?
0
Verilog 'cannot match operand(s)' & 'multiple constant drivers'
0
output won't work verilog
1
Why Verilog doesn't introduce a FF for reg type variable in always@* block and why reg is allowed in combinational circuits
1
How do I redirect/regenerate an input clock to an output pin in my FPGA design (Verilog)
0
Will 2 always@ blocks that run at the same time in verilog use old or recent values of outputs?