Various resources [1] [2] state that the optimal method of charging a li-ion cell -- such as one found in a mobile phone -- is to charge at a constant current (usually <1C) until a certain voltage threshold is reached, then switch to charging at a constant voltage until the charging current drops to about 0.1C, at which point the battery is fully charged.

The exact target voltage differs slightly for different battery chemistries, but according to National Semiconductor (see figure 5) it's common to switch from CC to CV mode at 4.1V with the CC target voltage being 4.2V.

Many manufacturers sell inexpensive charge-controller ICs that take the guesswork out of charging li-ion cells, but they're not as widely available to hobbyists as, say, an LM317 voltage regulator. Additionally, they tend to be small, SMT devices that are not breadboard friendly.

Is there a downside to charging at a constant voltage (say 4.2V) so long as the maximum current is limited to a reasonable value for the cell (say 0.5C)?

(In this context, consider "downside" to be more along the lines of "cell doesn't fully charge with CV-only, is damaged, explodes, steals your lunch money, burns house down, etc." and less along the lines of "CV-only charging takes longer", though that is also useful information to know.)

I ask because the internal charger circuit in my mobile phone died unexpectedly and, while waiting for a replacement phone, I constructed a CC-CV charger using an LM317 and successfully charged the battery. This was a bit messier than expected, and I was curious if a simple current-limited constant voltage circuit would also be suitable for occasional use.

(the numbers are given for LiCoO2 chemistry, for LiFePO4 they should be lower) Short answer: yes, this is OK. I charge lithium cells with a bench supply set to 4.2 V and whatever C/10 figure is for the cell I'm charging. If you are not in a hurry, slow charging is better, even for cells claimed to be capable of withstanding higher charging currents.

charging at a constant voltage (say 4.2V) so long as the maximum current is limited to a reasonable value for the cell

means you will have constant current charger till your cell is at ~95%. Up to this point the voltage across the battery will be less than 4.2V if you measure it. Only when your charger starts outputting 4.2V it will become constant voltage.

What you are about to build is CC/CV charger and this is the right thing to do. "Constant voltage only" charger will be set to 4.2 V with no current limiting and it will charge the lithium cell very slowly. You can check it youself, just construct var.voltage circuit and measure the current into (discharged) cell at 3.5, 3.7, 4.0, 4.2, and 4.5 V. Cheap Chinese chargers are constructed like that, they restrict the voltage to 4.2 V so the cell won't ignite after being charged but the consumer would have to wait longer. I once bought a portable emergency charger which could be emptied in a couple of hours then took 3 days to recharge its internal cells.

There are other precautions to observe while charging lithium, you can learn them from any modern charge controller IC datasheet (my favorite is Linear Tech., their literature is very high quality). If you don't implement these precautions in your design never leave it unattended while charging, otherwise it may ruin your morning one day.

That would be an excellent way to start a fire, so yes, DO limit current to manufacturer recommended values.

But to answer the question: no downside. I prefer to charge up to 4.1v to make my cells live longer but that's unrelated.

The key point you make is: "so long as the maximum current is limited to a reasonable value for the cell (say 0.5C)" That alone will make it so the 4.2v you aim for will be dropped so as to push only 0.5C in the battery at a given instant.

My experience: I actually tried to push a constant 4.2v with NO current limit through a li ion cell.

The amps can reach double digits and the cell hates it so much that it heats up like crazy.

If the current is restricted to less than 0.7 C ( also check cell quality and spec ) it's not an issue , with cells at low SoC limit current to this value . With current limited CV charging would I'm some way better and stress cells lesser at the cost of slower charging

No, you cannot do this. If you charge to 4.2V at 0 degrees C, and then put the battery in a 30 or 40 degrees C environment, it will explode from being severely over-charged. This is because the fully charged voltage is temperature dependent. See graph below.

I learned this from experience, it's how the cheap Chinese USB solar chargers work, and they will explode in your car if you leave them in there over a 1 year period and don't use them much. This is because they charged to 4.2V at the coldest point in winter, and once summer comes along, the cell voltage rises to 4.7 or higher, and the battery pressure then exceeds the limits of the packaging, and if you are lucky, it won't catch fire, but just puff-up (lithium polymer) and off-gas like mine. I measured the cell voltage with a multi-meter and it was 4.7V. 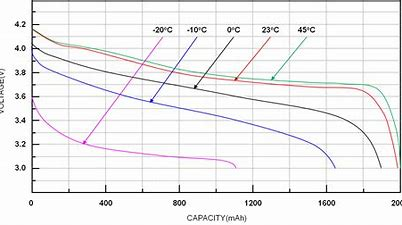 Also, just to further illustrate how you are going down the wrong path, take a look at a typical Lithium Ion charger, such as bq25601, and you will see the charge profile is dependent on temperature. If you are building a voltage regulator charging circuit into a customer product, it will not be safe. If you are just tinkering around at room temperature, then fine. 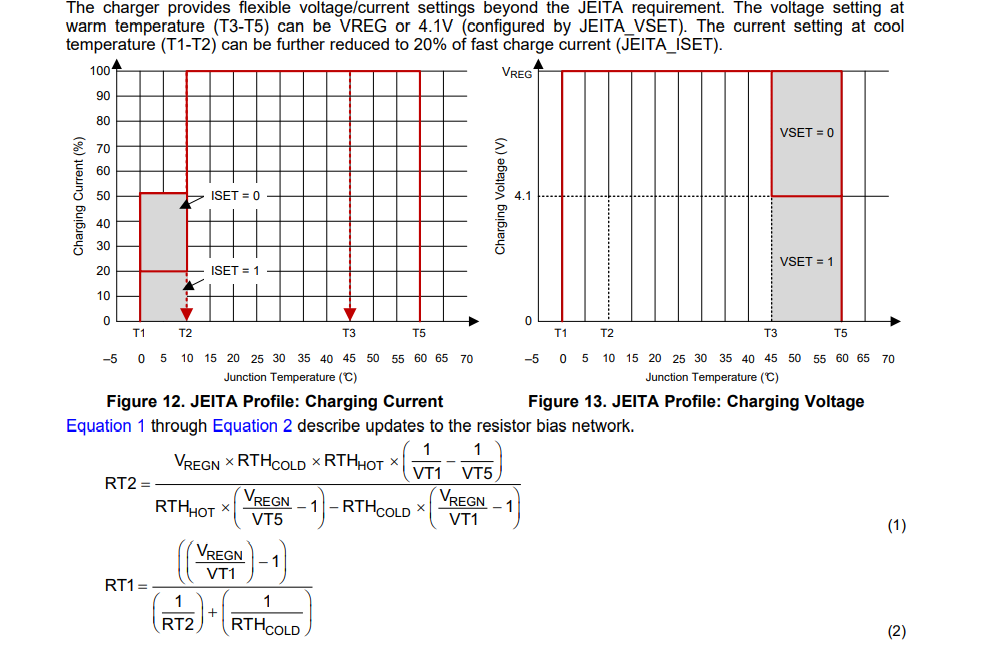 The latest specs are behind paywalls, but you can find free example certification test forms.

Not the answer you're looking for? Browse other questions tagged batteries charger lithium-ion or ask your own question.