I have a comparator with open collector output (LM311) and a gate with open drain output (SN74LVC1G06). I want join these two outputs to make a wired-or, with a pull-up resistor tied to +3.3V.

In a general way, is it appropriate to join an open-drain output with an open-collector output?

There really isn't an issue with that. Open drain and open-collector are essentially the same in this application.

Two things to watch out for:

Yes, you certainly can wire the two outputs together. Open drain and open collector just reflect the different technologies used inside the chips.

Keep in mind that 'wired or' is assuming input and output signals are inverted, so it's really an AND gate (both outputs must high-Z for the combined output to go high).

I am not sure if this concrete question and this practically oriented forum are the right place to reveal the philosophy behind the "wired OR" gate... but let me try... Here is my explanation why the "wired OR" really represents the OR logic function.

There is nothing special in this connection; actually it is the primary and most elementary OR gate. Only to see the OR logic function here, we have to think in terms of resistances, conductances or switch states.

From this point of view, the primary OR gate consists of elements (resistors, conductors or switches) connected in parallel that are driven by the input logical variables so that "conduct" (closed switch) represents "logical 1". It is obvious that, in this arrangement, the equivalent network will conduct (output logical 1) if only one of the elements conducts (input logical 1).

Only electronic circuits use voltages (or more rarely, currents) as input and output variables. So, we should first convert the input voltages into resistances by some "electrically-controlled resistors" (FET, BJT, etc.), and then - the equivalent output resistance to voltage, by passing a current through it. The role of the pull-up resistor is just to provide this current.

NMOS logic gates are implemented exactly in this way. For example, an NMOS OR gate consists of NMOS transistors in parallel and a pull-up drain resistor. So, in this case we think of the whole combination as of an (N)OR gate including the transistors. The same is true in the case of RTL gate (the picture below). 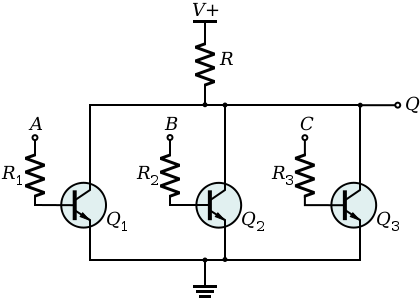 But wait... what has remained then from our logic gate? Only a point, node, joined wires... that is why it is named "wired OR".

In a general way, is it appropriate to join an open-drain output with an open-collector output?

Not the answer you're looking for? Browse other questions tagged open-collector open-drain or ask your own question.