I'm designing a class E resonant inverter at a switching frequency of approx. 2 MHz. I need to control the inverter so as to maintain a constant current at the load. My strategy would be to put a current sense resistor in series with the load to convert current to voltage, rectify and low-pass filter it, then read the essentially-DC value with an ADC -- I can take it from there.

Just to get a sense of the values involved, my nominal current is 0.17 A RMS, and I have determined that a 1 Ω current sense resistor is about the maximum value I can use. Hence the voltage drop on the current sense resistor is 170 mV RMS. I can tolerate at most 1% error on the amplitude of the sine wave at the output of my circuit. The circuit must work with a single power supply (say 3.3 V); no bipolar supplies.

Obviously this voltage is too low to rectify with a diode directly. My first thought was to use a precision rectifier; the following circuit, taken from a TI application note, might do the job, and it works for a single supply: 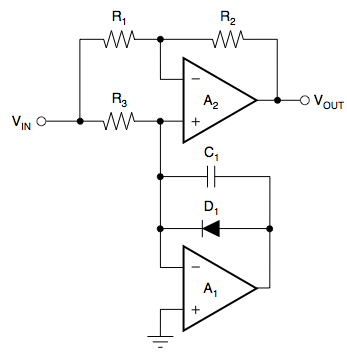 Yet, certain performance demands are made of the op amps in this circuit, so as to meet my requirements above, that narrow down choices considerably:

The cheapest (Digi-key qty. 1) op amp from a reputable manufacturer that meets these specs is the OPA2365 at $2.73. This would easily account for more than 10% and closer to 20% of the cost of my inverter, so I keep thinking there must be a better way. If it helps, this can be viewed as a peak detection or AM demodulation problem.

So the question is: can anyone suggest a cheaper circuit capable of measuring the amplitude of a ~240 mV, 2 MHz sine wave?

Edit: this circuit will be employed in a portable device, so power consumption must be kept in check.

Edit 2: As per @SpehroPefhany's answer, I'm trying to design a BJT circuit now. It goes something like this: 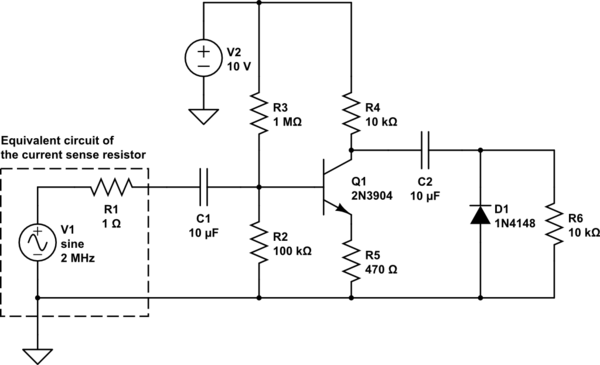 Yes, I know I cheated there by using a 10 V supply -- I have batteries on my system that can provide this voltage if necessary, which is something I forgot to mention above. Also, I've omitted the filtering part of the circuit; that should be easy after rectification takes place correctly. I can add back the diode drop voltage digitally after A/D conversion of the signal, and since it's amplified (I'm shooting for say 4.5 V amplitude now), I can easily tolerate 50 to 100 mV variations on diode voltage drop in manufacturing without violating my revised accuracy target (5% now, again as per @SpehroPefhany's suggestion).

The problem with this circuit is that, with no load (assuming R6 were taken out of the circuit) the DC voltage on the diode's cathode drifts up until rectification no longer takes place. If R6 is sufficiently low, the rectification effect is maintained, but at the cost of unduly loading the circuit, with a corresponding effect on the DC level seen on the load resistor.

This seems to be the most promising avenue of investigation until now. I welcome any suggestions to improve it.

Here's an idea: A simple and rough solution by biasing a diode with a small current. It becomes non-linear and rectifies even quite small AC voltages.

I've drawn a possible circuit. You could refine all of the values to suit your exact requirements. D_A and D_B are a pair in one SOT23 case. R1 and R3 supply the bias current to the diodes, from a 3.3 V rail. R2 and C2 are a filter to reject the 2 MHz and provide a stable output; they have a time constant well under 1 ms, very little 2 MHz gets through. A larger R2 or larger C2 might be a good idea, depending on the speed of your control loop. To use this circuit you must sample and process both the rectified RF output, and the temperature sensing output, and do some calculations on the results. (The switch is only to allow me to see the difference between RF On and RF Off).

Advantages of this circuit: 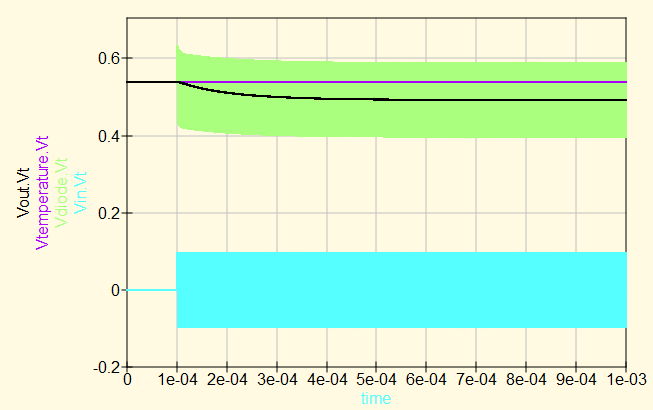 And plotting only the output DC voltages (here with a 100 mV peak AC signal): 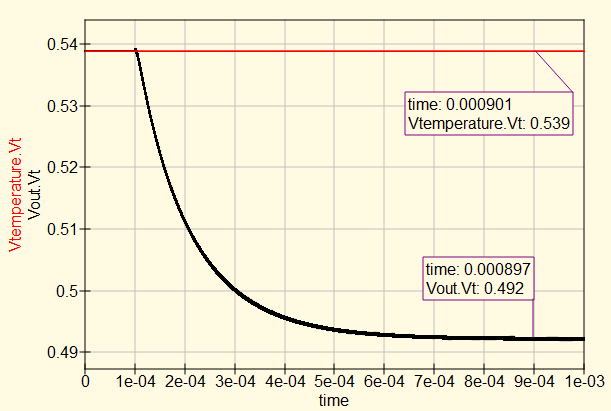 A quick investigation into the sensitivity of the circuit to parameter variations shows that once the equations are worked out, it should not be sensitive to temperature, frequency or changes in capacitance.

Just about any discrete BJT can easily amplify 2MHz, or (given the very low source impedance) you could use a tapped inductor or transformer to increase the voltage to something more reasonable for a Schottky diode to handle. With emitter degeneration you could get fairly good gain accuracy with the BJT. I would expect something like a single turn primary and maybe 20 turn secondary for the transformer, through a small ferrite toroid.

I do think an unadjusted accuracy of 1% at 2MHz is possibly an unreasonably tight specification for a light and will result in very high costs. An accuracy of 5% or even 10% and stability of ~1% over some temperature etc. might make more sense.

As an alternative, since the current will be within a fairly narrow range, you might try something like 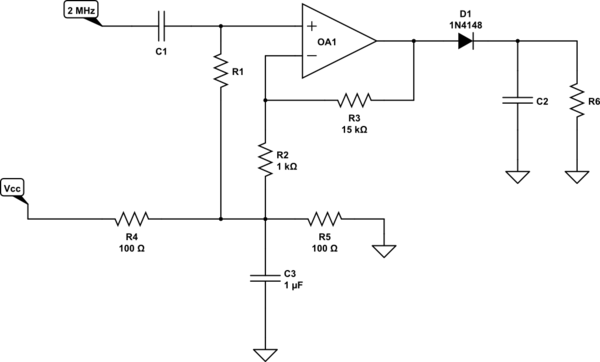 The idea is that, although 170 mV is too small to rectify, there's no reason you can't amplify it until it is big enough. R4, R5 and C3 make a virtual ground at 2.5 volts (for a 5-volt system), and C1 and R1 AC-couple the signal referenced to this virtual ground. OA1 is a fairly fast rail-to-rail op amp like an AD8655. The output is rectified into R6 and C2.

There are two possible problem areas. The input high-pass will introduce some phase shift, but I'd expect that at 2 MHz that shouldn't be a problem. The output low-pass filter is more problematic. I don't know your loop dynamics, so I can't tell if the response would be fast enough. Certainly you can trade off ripple for speed, but I really don't know if the end result would be satisfactory. Attack time is set by the dynamics of the diode/capacitor, and fall time by resistor/capacitor.

Not the answer you're looking for? Browse other questions tagged operational-amplifier switch-mode-power-supply rectifier sine am or ask your own question.