From a practical point of view, when you connect two audio signals to one speaker the result is that both audio signals can be heard. That means the two voltage waves were added, correct?

However, when you connect two batteries in parallel, the resulting voltage is not the sum of both batteries, it's more like the average.

This is all from real-world observasions. I don't know if this two cases are supposed to be conceptually the same.

Why does the voltage bahave differently in this two cases?

Output is always the weighted average (superposition) of inputs.

Consider the following circuit in which two voltage sources are connected to the same load.

Here both sources generates same tone when connected to a speaker (load). Then output is same tone with output amplitude = superposition (weighted average) of the two input signals.

If V1 and V2 are audio signals then they will have lot of frequency components in it (given by the Fourier transform). When connected to same speaker, output will also contain all these frequencies and hence one can hear both the audio signals.

Connecting batteries in parallel is sometimes done to boost current output, but is not a good idea if you have two different voltage batteries. Unless they are exactly the same voltage--and often even those of the same kind aren't, due to discharging--one will be charging the other. Not only can this be dangerous if the batteries aren't designed to be recharged, but the voltage you measure might not be either of the two batteries' rated voltages.

If you connect two signal lines to the same speaker, you're right: you do hear both signals. However, the same principle applies; anytime one of your audio signals is at a higher voltage (i.e. is 'louder') than the other (for example, you could have vocals on one channel, and guitar+drums on the other), the louder will drive current through the other. This 'cross-talk' leads to distortion. Mixers--which are designed to add audio signals in the way you imagine, linearly--resolve this issue by using op-amps: they use a virtual ground at the point where the signals meet, so that no current wants to flow through the other signal line-- thus distortion is minimized.

First the bad news. There is absolutely no difference between the math performed when joining two batteries together as when mixing two audio signals. Both are a weighted average based on the impedances in the circuit.

So what about the audio signals? Well, as in all things audio, we'll start with pure sine waves.

If we take two sine waves with the same amplitude, frequency, and phase and mix them, we get an identical sine wave as the output. This is... not that exciting a revelation, nor should it be.

Now we take two sine waves with different frequencies and mix them. The result... is no longer a sine wave. But one thing remains true: the voltage of the resultant wave at any given point is the weighted average of the voltages of the input waves at the same point. This remains true if we mix three sine waves together. Ten sine waves. A hundred. A thousand. A hundred thousand.

So then the big question is why does it sound like the two original audio waves mixed together instead of one big mass of sound? That's a question for Biology.SE, but the spoiler is that the cochlea performs a Fourier transform of incoming pressure waves, and the primary auditory cortex turns the results of the transform into "hearing". TL;DR: We hear frequencies, not impulses. 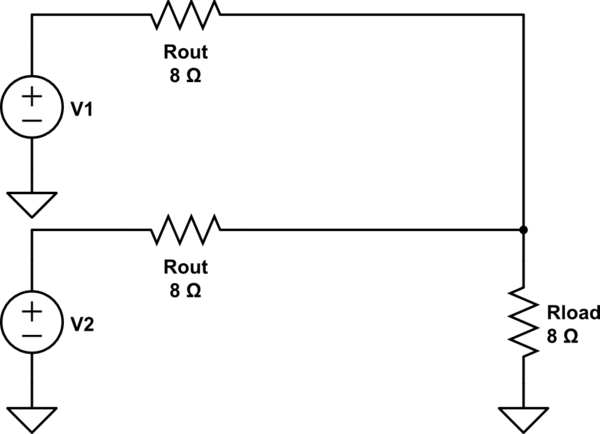 You have to distinguish different cases when adding voltages.

Strictly speaking, it is incorrect to connect voltage sources in parallel and current sources in series since a conflict between them will appear (each of them will try to impose its "desired value" on the common output). However, these incorrect connections are widely used in electronics. For example, in a differential stage with dynamic load, both the cases can be seen - a voltage conflict and a current conflict. 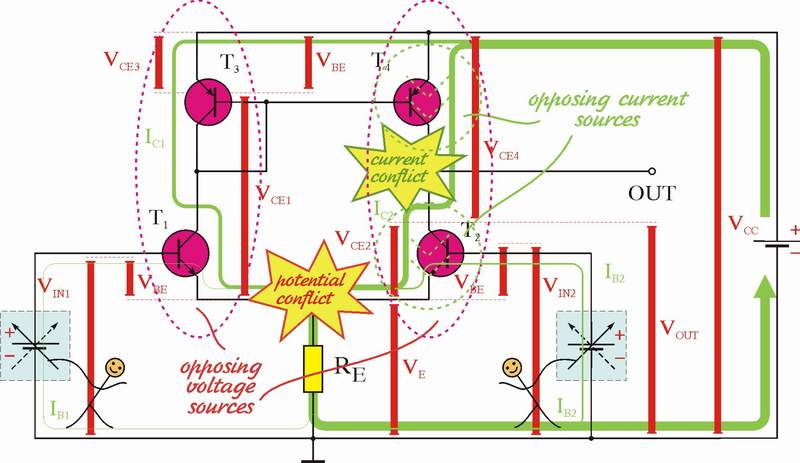 In practice, voltage sources always have internal resistances, or we deliberately add external resistors in series with them. Thus we obtain the extremely useful circuit of a resistive summer with weighted inputs... that wonderfully illustrates the principle of superposition. I have created a lot of stories about this humble passive circuit and its op-amp implementations that can be useful for you:

Parallel voltage summer - a Wikibooks story about the resistive summer

My favorite way to present this circuit is by the voltage diagram (the distribution of the local voltages along the resistors). 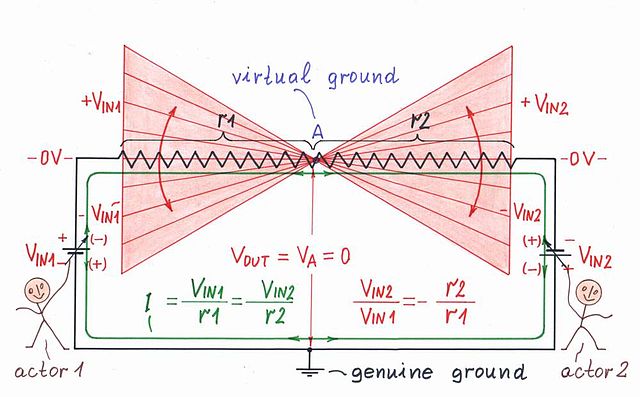 Not the answer you're looking for? Browse other questions tagged voltage batteries circuit-analysis adder voltage-source or ask your own question.

8
What units is my multimeter using to measure batteries?
0
supply two board with one battery
0
Direction of resulting I through simple circuit with 2 voltage sources separated by 2 resistors in series?
0
voltage difference between two batteries connected in parllel
0
How are conflicts between voltage sources or signals resolved?
40
Is current source also a voltage source?
1
Different voltage drop in serial and parallel circuit with resistor
0
Different behaviour of batteries with same voltage read
1
Advice on connecting batteries in series
0
ac voltage added to dc base line