Why are SMT electrolyic capacitors so much more expensive than their through-hole counterparts?

I noticed recently that there's a large discrepancy in price between electrolytic caps that are surface mount and those that are through-hole, particularly at higher working voltages.

These two parts illustrate a wider trend: generally, an SMT part that's roughly equivalent to its' through-hole counterpart will be far more expensive.

Is there a reason that there's a 4x price difference? I can see how one might pay more for a cap that can be reflowed (potentially eliminating wave or manual soldering) but it's hard to imagine that alone justifying such a large price difference.

And unless I'm not reading the datasheet correctly, it's not like the SMD part has, say, 4 times the current rating (quite the opposite, actually!)

Through-hole components are assembled by hand-soldering with a soldering iron, or by using a wave solder process. But surface-mount components must withstand IR reflow soldering, which applies heat throughout the entire component.

The same 20 pin plastic DIP through-hole component, tolerates a higher temperature when hand-soldered for 10 seconds, but can only tolerate a lower maximum temperature when the longer reflow soldering process is used. 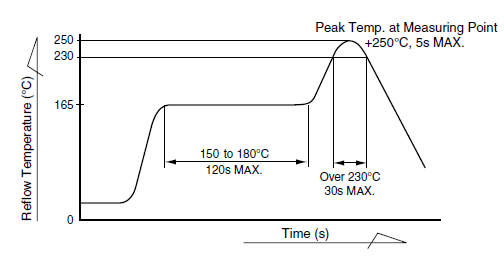 This is typical of most surface-mount reflow processes. There are variations in the preheat time, preheat temperature, reflow time, and peak reflow temperature. But this gives the general idea.

The surface-mount reflow process doesn't just apply heat to the leads of the component for a few seconds: the entire component + PCB assembly gets baked for several minutes, so that everything heats through. This preheat is required to drive out any moisture that may have been absorbed by the epoxy -- some types of LEDs are prone to this popcorn failure, where a pocket of trapped moisture suddenly pops (explodes, just a little bit) when the peak reflow temperature is approached. Slow preheating helps ensure the parts are completely dry before entering the hottest part of the reflow oven.

But that causes another problem, because a lot more materials melt before 260°C -- so materials that would be suitable for a manufacturer to use inside a through-hole component, might not always suitable for surviving the hotter surface-mount reflow process. Notice that the Nichicon reflow soldering profiles have one for 250°C peak, and another for 245°C peak, and another for 240°C peak -- not only Nichicon but many other manufacturers have similar struggles with peak reflow temperature. Without going into tooo much detail, there is sometimes a lot more going on inside a seemingly simple package that just a few welded connections. And surface-mount parts have to survive a higher core temperature for a longer time.

The hand soldering process has a higher peak temperature, but it's applied very quickly, and just to the leads, and usually one at a time. (Wave soldering heats them all at once.) The metal leadframe acts like a heatsink, conducting the heat away from the inside of the IC, so there's very little chance of heat damage under normal conditions. And, this is a process that has been around since the 1960's, it's well understood how to manufacture components to tolerate hand-soldering and well understood how to use them.

Not the answer you're looking for? Browse other questions tagged electrolytic-capacitor pricing or ask your own question.