Is there such thing as potentiometers that have a low resistance when centered and increasing resistances if you turn either left or right?

Edit2: Well, specifically, I'm looking to modify a motor controller to give a nice smooth forward and reverse with a roll of the handle (think motorcycle throttle, except if you twist the other way, it reverses smoothly). I know the motor controller accepts a switch as forward/reverse and a pot as velocity control. Anyone ever encountered something like this?

I'll suggest something wacky, in case you don't want to or can't modify your pots. How about connecting two standard potentiometers together with a mechanism, such that twisting a knob moves one pot, and twisting the knob in the other direction moves the other pot?

One possible way to do this is to have two linear pots with their grounded connections next to each other and electrically connected. Imagine a piece that goes between the two pots and it connected to both pot inputs via an elastomer (i.e. just wrap a rubber band around the pieces). When you move to the right, one linear pot will move freely, while the other is stuck against the hard stop. But because its connection to the input you're moving is elastic, the connection just stretches and doesn't risk breaking the pot. When you slide back in the other direction, the pot that was originally able to move will bottom out against its hard stop, while the one that was previously bottomed out will now move freely.

It's a little corny but I thought I'd throw it out there anyway. I can post a sketch if you like. :)

There IS a potentiometer that does something very similar to what you want.
It is called a balance potentiometer.

Basically, it's used for exactly what it sounds like - Handling Left/Right balance in an audio system. It's effectively two potentiometers back to back, with unusual tapers.
When the pot is centered, both halves are close to zero ohms. When you turn it one way, the resistance on one half increases, when you turn it the other, the other half's resistance increases. 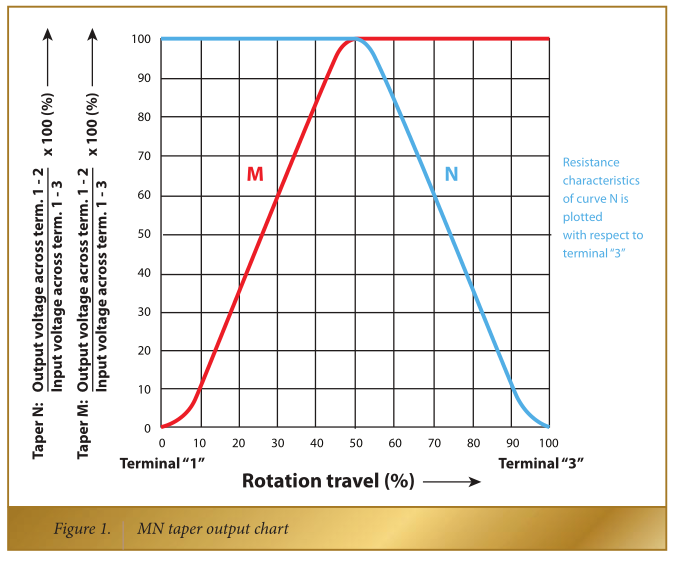 Bourns makes at least one here, but it is carbon composition, so not the highest quality..

I would imagine there are other manufacturers, but it is not a common item.

You are probably far better off using a plain old linear taper pot, and a MCU to handle the forward/reverse/dead-zone translation. Plus, that way you get adjustable acceleration curves.

If you were to remove the stop on a potentiometer, so it rotates 360 degrees, then electrically tie the ends together, you would achieve something like you described. I've never seen such a pot for sale commercially.

The J3R rocker pot has a spring return to center. I am using it in a project as a Wide-Tele remote control for a zoom lens. In addition to the wiper and two end-points, it also has a center tap which can be used to calibrate the null position.

I am feeding both the wiper and center tap into two channels of an ADC, and handling everything in firmware. But if you just look at the resistance between the two terminals, it works as you describe (0 ohms at center, increasing resistance either direction). You would need to compare the wiper with either one end or the other to determine direction.