I'm trying to use an Arduino+transistor to control a shutter (which I believe is a solenoid) at work. The shutter is normally connected to a power supply by two small wires (positive and negative) and from what I've gathered with my DMM an 11.3 V 3.8 mA current is applied to the shutter to keep it closed, and when it is opened the voltage and current drop to 0 before reapplying the current to close it again.

Right now I have the following circuit configured so that the transistor base is connected to the PMW 9 pin on the arduino, which cycles between 5 seconds of output = HIGH (5V) and output = LOW (0V). What confuses me the most is that when I take measurements with my DMM I get roughly the same results (12V and 4mA) on the solenoid but the shutter doesn't close.

Any thoughts? Is there something I'm missing in my circuit? The only thing I can think of is that maybe the current isn't ramping up fast enough to induce a noticeable magnetic force (I think that's how it works, don't judge me I haven't taken emag in a while), but I don't know how I'd be able to combat this. Thanks.

If my circuit isn't clear enough (mostly in the arduino area) leave a comment and I'll try to clear things up.

EDIT: I realize now that the arduino is actually sending a pulse-width modulated signal with duty cycle of 100%. Could this be causing problems?

It looks like there are some issues with your circuit. Summing up the comments:

Here is an updated schematic with these fixes. 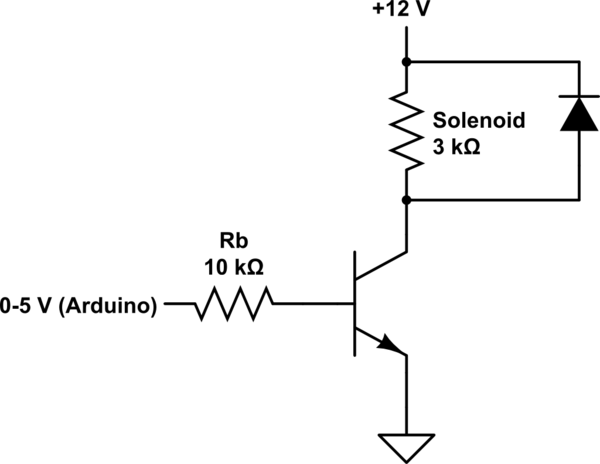 You could also take a look at this answer to see a bit more info on driving a solenoid.

If the Arduino is sending a PWM signal that could be the problem. However, you say it is PWM with 100% duty cycle, which would be on all the time, which is the same as a DC signal. Is it on and off the same amount of time? That would be 50% duty cycle.

If you have the same current through the coil you should have the same magnetic field and pull strength. The rise rate doesn't affect that.

Have you got the solenoid wired the right way around? Some relays, which is really a solenoid connected to pull a switch have polarity for their coils, this solenoid could be the same.

Not the answer you're looking for? Browse other questions tagged arduino transistors npn solenoid or ask your own question.