Objective: Marking labels indicating the positions of the violin bow on an acoustic signal, for example, a single musical note played by a full-length bow. The following video shows the example I am talking about, please just take a look from 1:00 to 1:03: https://www.youtube.com/watch?v=XIKPHsVyxKs

If divide the bow into three parts with equal length, roughly two markers can do it. So what I want to do is put those two markers on the corresponding acoustic signal, like this: 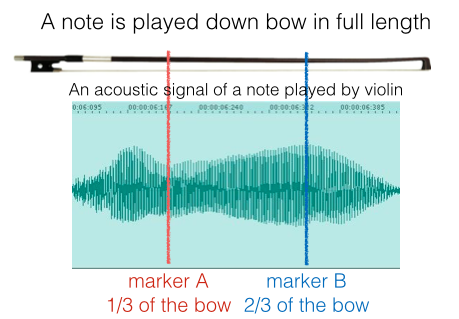 The objective is to figure out "oh, at this and that moments, the bow has traveled 1/3 and 2/3 of the whole length, respectively" when looking at the acoustic signal. A naive way is to simply divide the time axis of the acoustic signal by three, but it cannot be assured that the velocity of bowing is constant.

Method: According to the article http://www.ubicomp.org/ubicomp2013/adjunct/adjunct/p211.pdf which used a pair of colored SMD LEDs (as emitters on the bow) and color sensor photoresistor (as receiver on the violin) to tackle the problem. However, the circuit and the explanation of figure 3 are not clearly described, which made a lot of problems for me.

Problem: In short, based on my understanding, by installing SMD LEDs with different colors on the bow (red and blue marks in the case of the above figure), and a color sensor photoresistor on violin which detects the time-varying voltage when illuminated by SMD LEDs on the traveling bow, the objective described in the first place could be achieved. The following figure explains the idea: 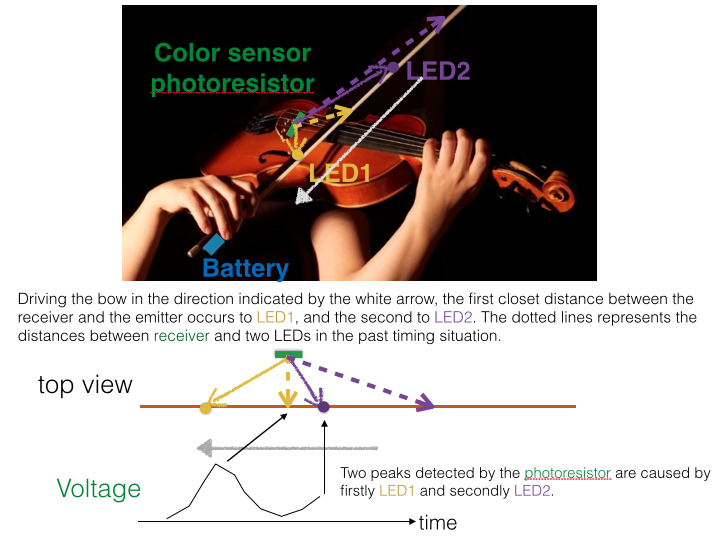 So the peaks in the figure indicates the positions of both LEDs. By aligning the time-varying voltage and the acoustic signal, the objective shown in the first figure is solved.

1. Is the above statement correct, achievable or not?

2. If so, how to set the circuit on both two ends (emitters and receiver)?

I am fairly unfamiliar with hardware and electrical components, hope you can help me if possible, thank you very much!

EDIT: I've implemented the LEDs and photoresistor as detector, and it works as I desired. Here comes the other problem: the alignment of the recorded audio signal and the time-varying voltage detected by the photoresistor. What came to my mind is a acceleration-sensed LED installed on the driving point of the bow, which makes a blink at the moment the player drive the bow. The idea is to blink the LED once the change of the acceleration direction is detected by a component. Such change in acceleration direction will thus make a impulse on the displayed time-varying voltage which indicates the onset of the audio signal.

How could I achieve such acceleration detector combined with a LED, with an acceptable size to be installed on the violin bow?

I like it. Keep it simple to start with. With two LED's of the same color. Then you'll just see two peaks as the led's go by... you'll have to figure out which end of the bow the signal is from. (or do some color tricks later.) For the LED drive circuit, a 9 volt battery, two white leds (Vf ~3.0 V) and a resistor to limit the current. Something around 300 ohms would give ~10 mA of LED current.

On the detector side, I might use a photodiode. But lets's keep it even simpler. Get another 9 volt battery, a light dependent resistor (LDR) and another resistor whose value we will need to determine experimentally. The LDR decreases in resistance when the light shines on it. So put the two resistors in series with the battery and measure the voltage across one of them as you move the led around. Depending on which resistor you choose (fixed or LDR) your signal will either be an increasing or decreasing voltage as the led goes by. Now play with fixed resistor value to give reasonable signals..
And now make some music :^)

You can certainly try a setup with two different coloured LEDs and two colour matched optical sensors (e.g. LDRs with corresponding coloured filters, or two outputs from a colour sensor IC) but the problem I foresee with trying to derive the bow position from the sensor responses is that the signal from the LDRs will vary not only with the movement of the bow along its stroke but also with the angle of the bow relative to the violin, which will not always be the same if you are trying to capture data from 'natural' playing, and with any changes in ambient illumination unless you are careful to eliminate this or filter it out.

Some other methods you might want to consider are:

Sparkfun would be one source for possible sensors (optical, proximity) and have distributors in many countries if you're not in the US, but many other companies also offer these types of sensors.

I have an idea but it requires some DSP knowledge and programming skills. I assume bow movements are clearly distinguishable on the signal monitor. If you filter the record with a sufficiently narrow pandpass filter, near to lowest frequencies. The waveform you will have will be a function of the speed of the bow as frequency modulation. What you have to do is just counting the alternations belong to the particular movement, dividing them to 3, counting 1/3 and mark, once again and mark, that is all.

Not the answer you're looking for? Browse other questions tagged led surface-mount photoresistor position detector or ask your own question.