Why does my circuit work with ceramic capacitors but not electrolytic?

I had used some capacitors as decoupling capacitors for my USB powered device. Due to some chip issues, this resulted in using three 47 uF capacitors.

I used electrolytic capacitors. Three in parallel, between Vcc and Gnd. However, there were still problems.

This other group I am working with used ceramic capacitors. They gave me their modified part and everything worked.

I thought that the main difference between the different materials in capacitors was when they are used at high frequencies. Why is it that ceramic capacitors worked in this case and not the electrolytic type?

Some links I used as reference:

OlinLathrop and SomeHardwareGuy's answers are both correct. And since you mentioned this was a USB Bus Powered Device, there's another gotcha. According to the Universal Serial Bus Specification 2.0 Chapter 7 Electrical, section 7.2.4.1 Inrush Current Limiting:

The maximum load (CRPB) that can be placed at the downstream end of a cable is 10 µF in parallel with 44 O. The 10 µF capacitance represents any bypass capacitor directly connected across the VBUS lines in the function plus any capacitive effects visible through the regulator in the device. The 44 O resistance represents one unit load of current drawn by the device during connect.

This is easily missed, since it's pretty deep in the rev 2.0 spec document -- many years ago, we accidentally violated this spec on some of our early USB powered boards by using a 10uF capacitor, and the result was that sometimes, some boards would have too much inrush current when plugged into USB port. Windows would report an error, and would power-off that USB port until the device was unpluggged.

If you must for some reason use electrolytic capacitors on a USB bus-powered device, the solution is to either keep the amount of capacitive load directly connected to VBUS less than 10 µF, or use an external power supply (i.e. USB Self-Powered Device instead of Bus Powered Device configuration.). The FTDIchip.com FT232 data sheet has examples of using a FET to isolate the USB VBUS supply from the rest of the circuit. When the device is plugged into USB, the FT232 first negotiates with the USB host, and only after the host gives permission, then FET switches on to power up your device.

Without this negotiation, the sudden inrush current of >10uF of fully discharged electrolytic capacitors would be indistinguishable from a short-circuit fault. The USB port gets powered down to protect the host computer. There will still be some inrush current when the host sends the command to enable the device, but by that time, the host has already negotiated with the peripheral and given it approval to switch on.

Electrolytic capacitors are still useful for bulk power supply decoupling, typically where power enters a board assembly -- electrolytics generally give more capacitance per unit volume than ceramic, and since the power supply system leads already have some series inductance, the additional inductance of the electrolytics is tolerable. But for local bypass (close to each IC), ceramic capacitors are essential.

Inductance... Followed by impedance. Your caps are trying to provide a low impedance path for current to flow at your frequency of interest. One culprit will likely be how you connected your caps, and the second will be their impedance over frequency.

Look for this curve in the datasheets of both parts. 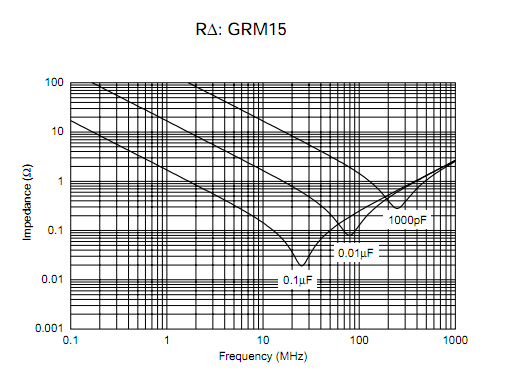 You'll see how much lower the impedance of the other groups caps will be at higher frequency (where your device probably needs it).

Not to say electrolytics are not useful in a power distribution network design, they're just only really useful at low frequency. The added inductance of the package doesn't help.

Digital ICs do not draw current continuously. They draw current in spikes when they switch. The faster the IC the faster and more frequent these spikes will be.

Unfortunately your incoming power supply will not have a low impedance at high frequency because wires have inductance. So to lower the impedance we add bypass capacitors (also known as "decoupling capacitors" though I find that term can be somewhat confusing).

So to be effective your capacitors have to still work as effective capacitors at high frequencies. Elecrolytics don't.

Not the answer you're looking for? Browse other questions tagged power-supply capacitor decoupling-capacitor or ask your own question.

64
Can I replace all electrolytic capacitors with ceramic?
2
What is the reason for high frequency noise when amplifier is powered with battery?