I am a developer using languages like C++ and .NET. I am trying to understand how computers work at a lower level.

Are these measurements independent of each other? What physical factors determine the read/write speed? e.g. bus width?

In principle, a drive is faster when running at 7200rpm than at 5400. But there are so many things to consider, that you can not compare two different drives. You also have to distinguish access time and sustained data rate:

this is the time it takes until requested data is delivered. It can be divided into:

which is the average time it takes to move the arm with the head from one track to another. It depends on the technology used. For example, the first disks used stepper motors while today its just a coil inside a strong magnetic field. The head has to accelerate and decelerate fast and some kind of damping is needed to avoid oscillation of the head when reaching the desired track.

A disk with more platters has more heads, so more mass to move. This leads to a higher seek time.

If a physically identical device is sold with lower capacity, the number of tracks is smaller, and so the average distance the head has to move. The seek time decreases.

The acceleration of the head can be adjusted to get a loud but faster 'server' disk or quite, but slower 'desktop' disk. This setting can also be set by the user sometimes.

You can do nothing but increasing rotation speed to lower this value.

Of course, the controller of the disk (and also the bus and controller on the other side of the bus) plays a role, and in the past, some drives had a poor performance which could be improved by firmware updates.

Cache may also be used to reduce latency: When a full track should be read and the head arrives just when the middle of the track passes by, the disk may start to read the last half of the track, then the first, reorder the data, and send it to the computer.

This is the time to read consecutive sectors. Of course, it depends strongly on the spin speed of the disk, but there is more:

The more data can be contained on a single track, the more can be read during a single revolution of the disk. So, the easiest way is to increase the number of platters which are read out in parallel at the cost of higher latency.

For example, doubling the number of platters (theoretically) doubles the rate, while going from 5400rpm to 7200rpm does not. (And capacity has doubled, too!)

And of course, development of platter materials with higher data density goes on.

One other point may be interesting: At the outer diameter, tracks are naturally longer than at the inner. So the number of sectors per track is increased in steps from the inner to the outer diameter. So, data rate is higher at the outer diameter! I remember discussions whether to place the partition of the operating system at the "outer" part of the disk...

I just remembered that I have once written a script (for linux) to measure the (uncached) read data rate over the entire disk. It uses

where x is the position on the disk to use for the test in GB. Here is the result for my 700GB disk: 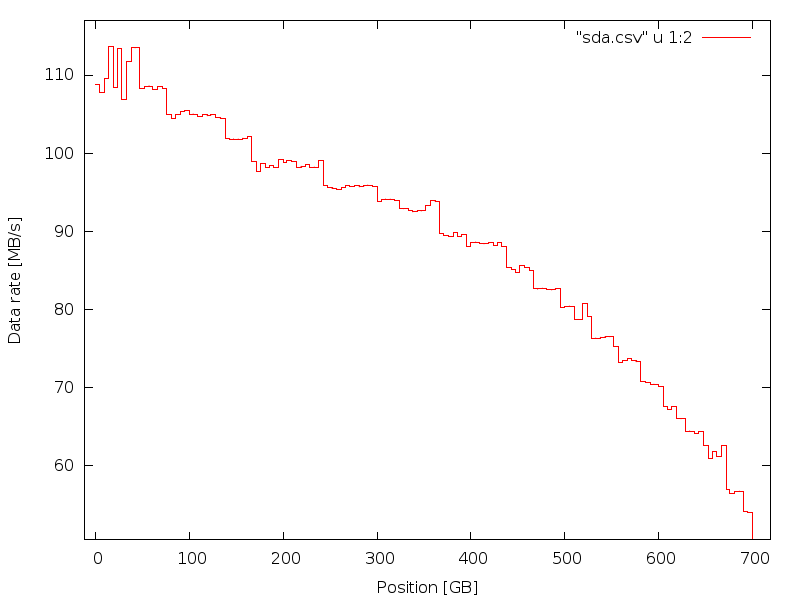 You can clearly see that there are steps due to the different amount of sectors per track. It's interesting that data rate is at maximum at the lower bound, so sector counting starts at the outer diameter!

Again: If a physically identical device is sold with lower capacity by not using the inner tracks, its overall data rate is higher.

Another: A sector contains payload and some internal data for organization, so larger sectors can contain a higher fraction of payload. This increases data rate and capacity. A negative side effect: Small files which occupy only a small part of a sector waste the rest of the sector.

As you see, disk speed is influenced by so many things that it is hard to compare two disks. As a rule of thumb, disks with higher spinning speed are faster. Also, disks with higher capacity are faster, but if you compare similar disks (or identical disks with different manufacturer settings), the rule may be wrong. Also, this are just the basics, nobody knows all the tricks manufacturers use, and how they compare.

Remark: I used the terms track and sector here. In reality, there are also clusters, and many drives do some kind of virtuaization between their inner and the outer world. Also, the computer itself can help to improve performance. A file system storing small files in some kind of data base instead of single sectors can save space. All this is not considered here.

Not the answer you're looking for? Browse other questions tagged computers hard-drive or ask your own question.

1
Connecting a high-speed comparator into a computer
8
Why does a speed-controlled computer fan require 4 pins?
4
Hard drive that has the ability to "read" old data while it performs a write?
2
usb drive EEPROM IC how is memory read-only blocked and unblocked?
5
Is it possible to read erased flash memory?
1
Read or set registers in motherboard
2
Why does reading 1 byte from hard disk has the same speed as operation reading 1000 bytes?
1
How does the computer's BIOS change the clock speed?
0
Understanding USB Descriptors speed
10
Is it correct that in a hard disk both surfaces of each disk are capable of storing data?