Here it's for t < 0, to get initial conditions 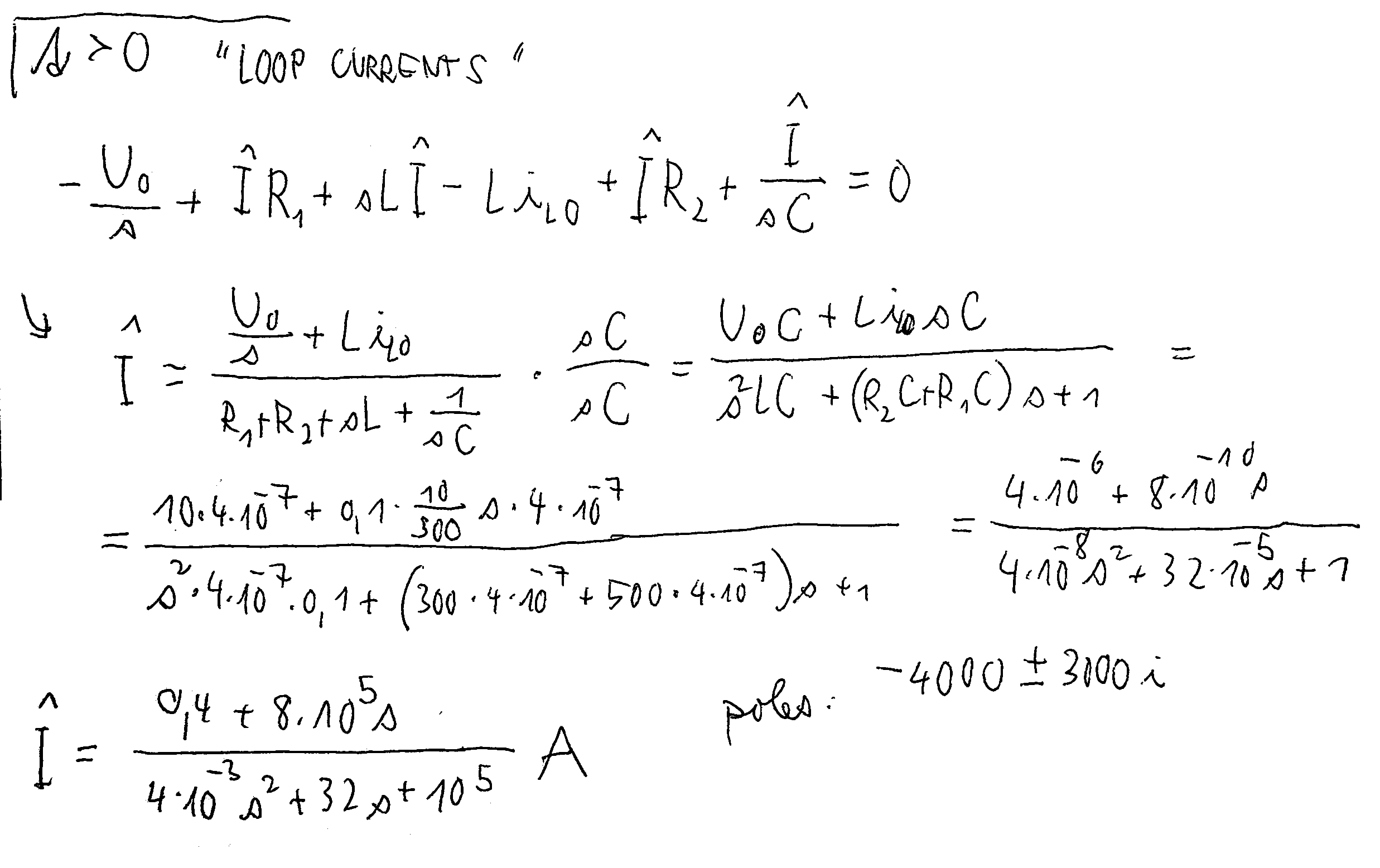 (I with hat is current in laplace domain)

There I got kinda stuck, I don't know how to proceed. Also, it's possible I've made some mistake.

How do I get current in the time domain? It should be some kind of damped wave, looking at the poles, but I'm not sure how to do the inverse transform of this.

(ps sorry if I use incorrect terminology, I'm translating it from Czech and am not sure about some things.. I hope you can understand it like this.)

I don't think I can give you all the details, but this may help you get started. Fortunately, there are lots of information on the Web for this. A typical way of reverse transforming an expression like yours is to look up a table of Laplace transforms, rewrite the expression such that the components match one or more of the forms in the table. With your expression, it is going to fit into these two forms (copied from Wikipedia):

Now, rewrite your expression such that \$I(s) = AP(s) + BQ(s), A,B\$ are constants.
The first step of rewriting would probably be rewriting the denominator by "completing the square". And you would be factoring out constants during the rewrite.
After you get P(s) and Q(s) to match the forms in the table exactly, then, \$i(t) = Ap(t) + Bq(t)\$ by using the original functions given by the table.

New edit: I was curious, so finished the reverse transform as below

What got me curious was I tried to get the reverse transform from WolframAlpha also, and got some really complicated answer in real form. My guess is that it uses a mechanical method that produces an answer too complicated for it to reduce. So if one just plug numbers into a computer to get answers, sometimes simpler relationships may stay hidden.

I have tabulated and plotted my solution given below in Excel (fully general/universal solution, i.e. all 3 cases, see below; I can provide an interested person with it via e-mail; I'm Czech as the inquirer MightyPork most probably is) and have also simulated the circuit in PSpice (receiving identical results with Excel graph at the bottom). Instead of 'I with hat' I have used I(s) notation during my derivation. 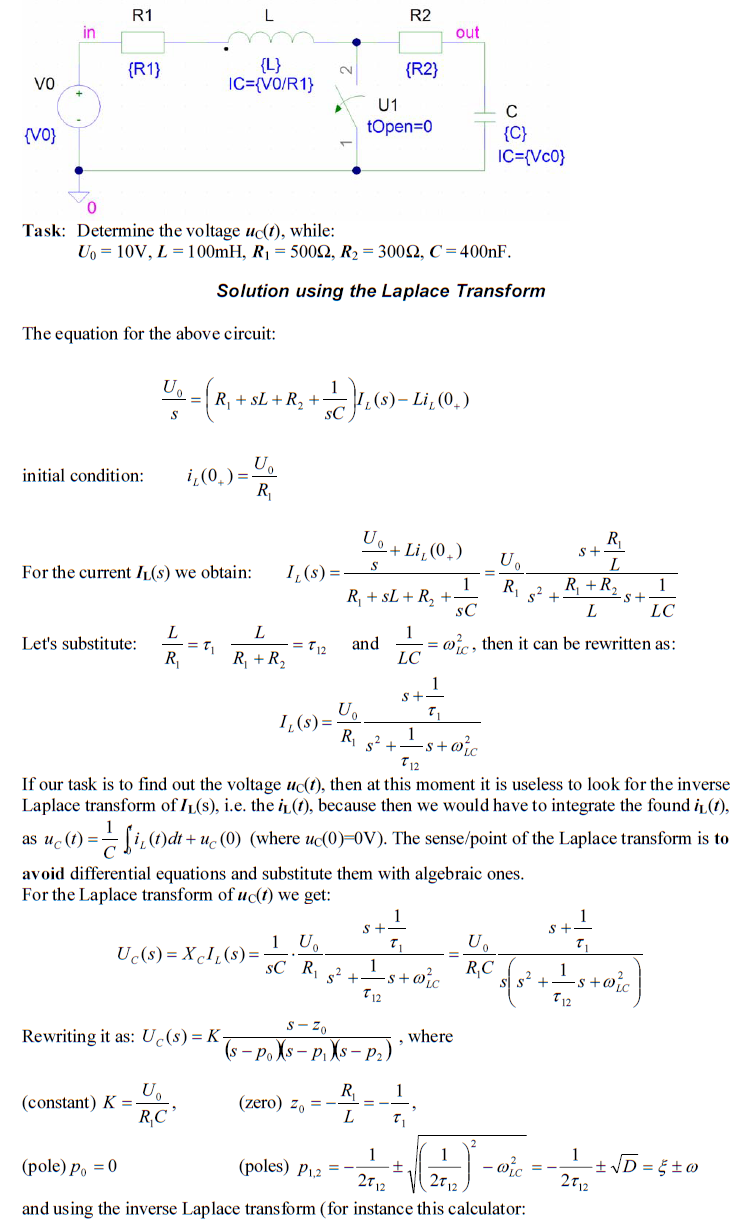 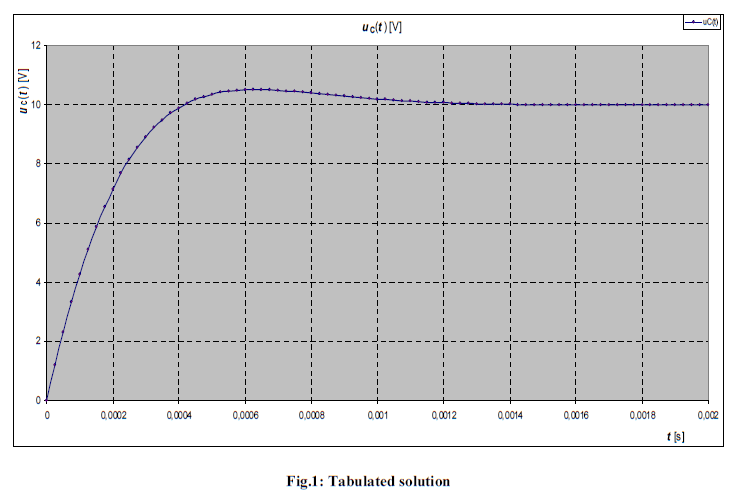 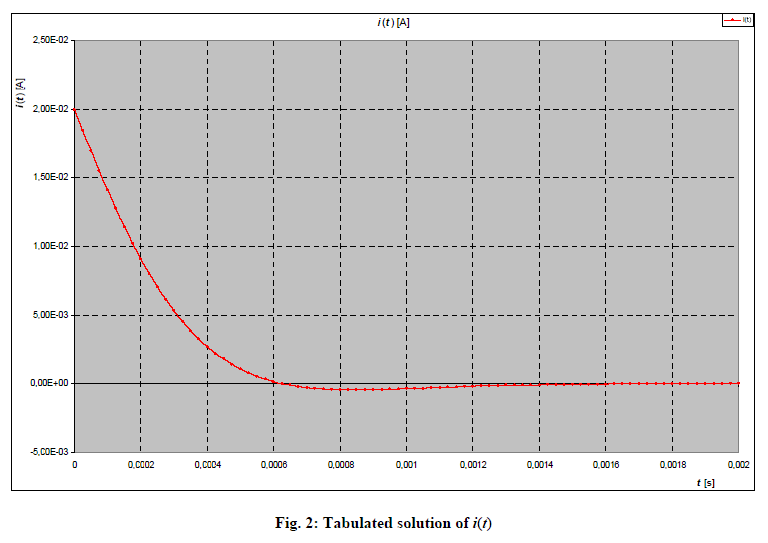 …There I got kinda stuck, I don't know how to proceed. Also, it's possible I've made some mistake. How do I get current in the time domain? It should be some kind of damped wave, looking at the poles, but I'm not sure how to do the inverse transform of this… 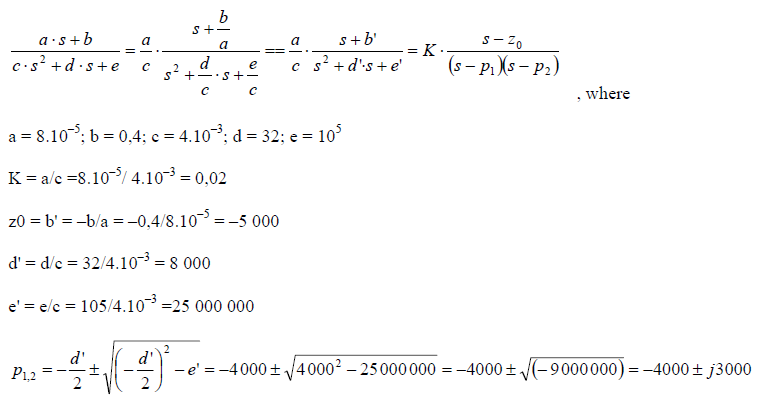 For our expression you can find the inverse Laplace transform as:

So, if we are interested just in our particular case (with complex poles), then we can write: 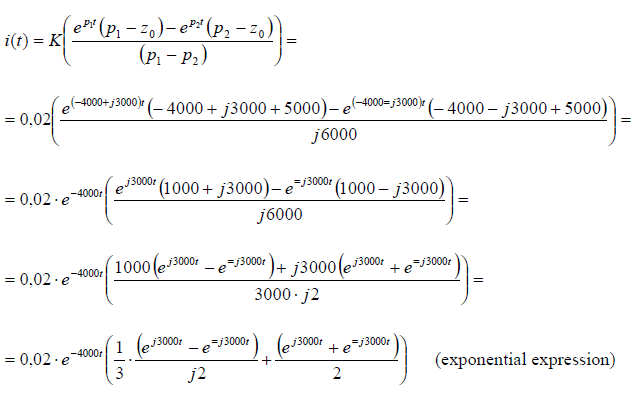 so, the final result (as rioraxe has already stated) is:

If we wanted to do it manually, it'd be better to use the above "exponential expression" because

and the integration itself becomes quite easy, but let's do it using the WolframAlpha Calculator:

… astonishingly, the same result as earlier :) (having used the Laplace transform till the end of calculation previously)

Not the answer you're looking for? Browse other questions tagged circuit-analysis transient laplace-transform or ask your own question.

4
Solving the second-order differential equation for an RLC circuit using Laplace Transform
0
Transfer function of frequency shifted signal
2
Inverse Laplace Transform of RLC Circuit
1
Laplace Transform (Voltage Transformation)
0
Some questions on a passive network's transfer function and time domain response
0
If I look at a signal in its frequency domain, are there some guidelines by which I can tell how that signal looks in the time domain?
0
Getting different impulse responses by solving with Laplace transform and plugging delta-dirac
1
Laplace Analysis of Step Response of a Parallel RC Circuit