Just wanting to clarify my understanding of ESR here, because I'm not fully sure if it should be modeled the way I would think to model series resistance. Or if it's more complex than that.

Basically the question comes down to is there any reason why one wouldn't place a ceramic capacitor in parallel with an electrolytic cap to drastically reduce the total ESR.

This is going off the assumptions that:

So the ceramic capacitor would have a negligible effect on the total capacitance, but be the primary determinant in the total ESR. (values are 2200uF electrolytic, 1uF ceramic, 24V)

An equivalent circuit for what you describe is: 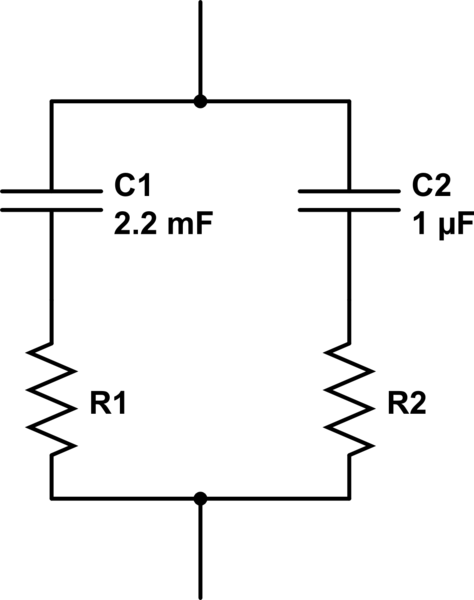 Note that the resistors aren't in parallel, so we can't use the usual parallel resistors equation:

What we do have, however, is two impedances in parallel, so we can use the very similar parallel impedance equation:

Let's say the electrolytic has an ESR of 18mΩ, and the ceramic has an amazing ESR of 0.001mΩ. Now in order to apply that equation for parallel impedances, we must first calculate the impedance of each capacitor and its ESR. The impedance of an ideal capacitor is given by:

Impedances are complex numbers, and here \$j\$ is the imaginary unit. \$f\$ and \$C\$ are the frequency and capacitance.

So here we encounter the first problem: what do we use for the frequency? An ideal pulse is an infinite series of odd harmonics, so really it's many frequencies. But let's just say that if we truncate that series at 1MHz, that will make a fast enough pulse for your application. Let's do the math at 1MHz.

So at 1MHz, the impedance of the electrolytic is:

Likewise we can calculate the impedance of the ceramic capacitor as

Applying those into the parallel impedances equation above, and you get the total effective impedance as:

The real part of this number, 17.8mΩ, is the ESR. It's reduced somewhat, but not a lot. The reason: the magnitude of the impedance of the electrolytic is much smaller, so it influences the final result much more.

However, for your pulse this is of minimal help, since most of the energy you need to deliver is at lower frequencies. Or thinking about it another way, although the ceramic has a relatively low ESR and can discharge more quickly, it stores less energy than a larger capacitor charged to the same voltage, and thus is less significant.

I should also point out that the above calculations make a really bad assumption. If you look in the datasheet for an electrolytic, right next to where the ESR is specified, so too is the frequency at which it is measured. It will be different at different frequencies. Some of the ESR comes from resistance in the leads and plates, and this is relatively constant with frequency. Another component of ESR comes from losses in the dielectric, which is very frequency dependent. You can read more about this kind of loss researching dissipation factor.

Your first assumption is incorrect. To consider that a bipole is in parallel with another one, each pair of terminals should share the same voltage. That is not true to both ESR, because the voltage of the terminal connected to the capacitor depends on the capacitor characteristics. So they are not in parallel, you cannot apply the stated law. Of course, if you connect two identical capacitors in parallel they will halve their ESD.

The only reason to connect a ceramic capacitor in parallel to a electrolytic one, is to make use of its behavior in high frequencies.

It would have been best for Ricardo to have supplied an actual representation of the circuit. The reason is that it can be helpful for those who answer such questions because they can be slightly ambiguous. Phil may have been thrown off a bit by this.

If you're discharging into a load, there are three impedances: Supply, circuit, and load. Lowering the ESR will affect the discharge time constant of the circuit, but not of the supply and load. The greatest affect on the circuit will be from the element (or elements) with the greatest impedance.

I think what Ricardo is actually looking for is an analysis of discharging into a load and how ESR plays a role in that. A 1 us discharge into an LED would depend on the capacitor value, initial capacitor voltage (whether it is fully charged or not), and the forward voltage drop of the LED at that voltage. The capacitance value of the electrolytic will determine the amount of charge available to the load. The first assumption of Ricardo's is incorrect, but he may have just worded the thought improperly. Capacitances are additive in parallel:

and operate according to the parallel resistance formula substituting capacitances for resistances.

ESRs are usually defined by manufacturers as having a complex component because their products may be used for a variety of solutions. Some of these involve using frequencies, as is true with switched mode power supplies. The smaller the value of capacitor ESR, the less impact it will have on the circuit it is used with. An ideal capacitor will have zero ESR and only pure capacitance. All other capacitors have inductive and resistive components that interfere with what would otherwise be a pure capacitance.

Life would be so much simpler if we only had ideal (pure) elements to work with.

Because this is a short duration discharge, there will be little charge used, unless the LED is a parallel bank. The power supply output resistance is usually fixed, so the other resistances will be analyzed first. The LED load will have a forward voltage drop of about 2.2 V and an operating current of around 20 mA. LED resistance would approximate to

Because a large portion of ESR is lead resistance (the resistance of the lead wire) plus lead-to-plate resistance (the resistance of the lead to plate connection), a well engineered and manufactured capacitor will have much less resistance than the load, as Phil has shown. So unless there is a current limiting resistor in series with the LED, the discharge time constant will be mostly determined by the LED forward voltage and the power supply resistance. A 1 us draw of charge from a charge storage capacitor is nominal, so the storage capacitor will maintain most of its charge after a single cycle. If the supply voltage is very close to the forward voltage drop of the LED, ESR may be an issue, but that would depend on the capacitance of the storage capacitor and supply resistance. If the discharge is repetitive, the circuit response may differ. Any switching mechanism (which may have its own set of impedances) must be assumed because nothing is specified.

I get the feeling that something crucial to giving a good answer wasn't stated because ESRs of most electrolytics are below 1 Ohm, which will have little or no impact on the given circuit. It always pays to give as much accurate information as possible. That helps to get you the most accurate answer. There really should be no need to be concerned about capacitor ESR for a pulsed discharge circuit as described. And because no frequency has been specified (only a pulse duration), the discharge time constant would be primarily set by the LED. So unless there is something very exotic about the load or the switching circuit connecting it to the capacitor, ESR won't matter at all.

If you want to discharge a capacitor into an LED quickly, the most significant factor is LED resistance contribution. This probably won't happen within 1 us, and if it did, would cause problems under normal circumstances. For example, if you did this repetitively, you might damage the LED, capacitor, or both.

Also, in order to fully discharge a capacitor, you need a low impedance electron path or a very small value capacitor. Discharging to around 10% of the initial capacitor voltage requires 2 time constants of 500 ns each. If the LED resistance is the greatest, then calculating the necessary time constant can be done using the formula: t = RC.

You would also have to disconnect the supply from the capacitor prior to pulsing the LED. You could do this electrically, but there must be a short delay between the time the supply connection is opened and the connection to the LED made. There are MOSFETs which can perform the switching function while inserting only a few milliOhms resistance.

Not the answer you're looking for? Browse other questions tagged capacitor esr or ask your own question.