Does anyone use op-amps for modelling physical systems any more?

I am studying for my System Modelling and Simulation exam. So the textbook says there are three categories of models.

Putting aside my suspicion that a block diagram is no less a mathematical model than a system of differential equations, here is my question.

They define physical similarity model as a scaled down version of the original system. On the other hand, physical analogy model, is using electrical circuits to model the real system.

I thought this was last done 40 years ago, and currently nothing can beat the computational power of modern digital computers. Are analogue electrical circuits still used to model some systems?

Smart Grid is a typical example where analog computing is still used. The analog computer can be faster for complex system tracking, but it is obviously controlled by digital systems today and seen through digital interfaces.

But seriously, I saw a great model of an aquifer made with a mesh of resistors and capacitors. You could just clip the scope to any junction to get a prediction of the water level for the next century.

These days we can solve a few thousand simultaneous equations in a few seconds or less, so this aquifer model is quite redundant.

On the other hand, we use physical models all the time in very simple circuits like low pass filters, integrators. But these are for circuit convenience, never for the investigation of a physical system. So for modelling, it's easier to just do it digitally.

Its still within living memory such machines were used (at least in my living memory). Below is a photo of the Phillips machine used by the Bank of England to model the economy. It went out of use in the 1970's. 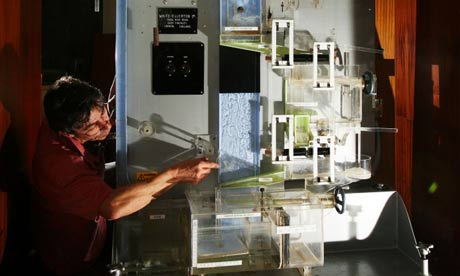 Are analogue electrical circuits still used to model some systems?

Yes - I think so. However, not as real hardware models (like in the days of analog computers) but as block diagrams consisting of amplifiers, adders, controllers, integrators, filters,...

This is a very convenient method for finding the systems transfer function and related information like bandwidth and stability properties - as a result of computer simulation (analog computing on a digital computer). For this purpose, block diagram oriented and/or symbolic simulation programs are available. More than that, such a model offers the opportunity to modify the system with the aim to improve the systems behaviour (step response, stability,...).

While it might be true, that computers are extremely powerful these days, you can still face applications where you have tight power constraints. There it might not be possible to use a powerful enough microcontroller or processor.

In those cases an analogue circuit might still be the way to go.

As this sounds quite vague and probably not only the asker wonders what this has to do with modelling a physical system, I'll give a short explanation what I have in mind. I can't go into too much detail but here goes:

The control system may take only 5mW of power. It is required to control a system with an update rate of 1kHz. There has to be some sort of mechanism to detect a faulty condition inside the controlled system in a very timely manner, at best in real-time (also 1kHz).

Now the control mechanism is implemented in a microcontroller which is able to handle that task quite well inside these energy boundaries. The problem was to detect the faulty condition.

For this task the analogue circuit came in. The system was modelled as an analogue circuit, and the same input was applied to the circuit as to the system. If the output differed by a to big amount, there was something wrong in the system (or the model during development stages).

Now calculating the whole model at a refresh rate of 1kHz was not possible for the microcontroller in that power budget.

Today with the advent of Cortex M4F, you might get close, they are pretty impressive, but I doubt that it is possible to squeeze it in just yet.

This might not be the modelling the asker had in mind, but it's still an application of an analogue circuit to model a physical system.

This is very sad because I believe by not doing some semblance of analogue computing in schools/colleges/university we are not turning out enough high caliber engineers/physicists. It's very easy, but not conducive to 'real' learning to use a PC. BTW, no lecturers in my university department (control Eng), could patch a simple analogue circuit up, I was the only one!

I have a small analogue computer which I frequently use just to keep my hand in;I use it for simulating chemical processes and plant...Heat exchangers, CSTR, neural networks, etc. it's good fun! I also use breadboard to attach extra op-amps, caps & resistors also very cheap and easy to lash up analogue computing circuits.

Not the answer you're looking for? Browse other questions tagged modeling or ask your own question.