Op amp design with both voltage and current gain

I need help designing an op amp with both a voltage gain and a variable current gain. My understand of op amps isn't perfect but I do know how to design an op amp circuit with a voltage gain and one that acts as a current source. That is relatively simple but my problem is combing them to have an op amp circuit with both a voltage gain and a variable current gain. More specifically, I need a voltage gain of 2 (5V to 10V) and a current gain of at least 300 (1mA to 300mA). The goal of this circuit is to drive a piezoelectric actuator. I am using NI instruments that don't output enough current and that is why I need to design this circuit. My problems are as follows: If I design a non-inverting op amp with a gain of 2 and then place my actuator across the output voltage, the actuator (correct me if I am wrong) will only draw as much current as the op amp can output. How do I design the circuit so I can drive a set amount of current to the actuator while maintaing a constant voltage gain? Could I put a potentiometer in series with the actuator to maintain the current but then wouldn't the voltage drop across the actuator? I hope I am being specific and not too confusing. I imagine this circuit will be pretty simple but I just can't put the pieces together. Any help would be greatly appreciated.

Your description is not too bad but you have confused yourself by attempting to apply terminology which is inappropriate. The only way to force both current and voltage to both have fixed gains at the same time is to modulate the load impedance as well. (As i= V/R or V/z so they are all related.

What you want (and it's easyish) is an output current buffer and voltage gain. Effectively the current buffer is a power amplifier as it can provide more VI product = power at the same voltage swing as the input. Gain can be unity and in fact the buffer part of the circuit below has slightly less than unity gain. The opamp makes up for this overall.
You do not set the current - you just provide the ability to provide what current is needed when V and Z are set and the buffer provides whatever current is needed to maintain the voltage required.

The easy starting point is an emitter follower at the opamp output if you want only +ve drive (Q1 below) and an equivalent inverted follower if you want bidirectional drive (Q2 below). Effectively a current buffer. The op amp includes the buffer in its feedback loop in the final circuit.

Note carefully that both the buffer transistors are "emitter followers" - unity voltage gain (or less) stages with the output taken from the emitter of both the transistors. You will see numerous circuits where the transistors are both NPN (usually) or both PNP (sometimes) with the output taken at the midpoint between them. This arrangement is sometimes referred to as "totempole" output - it has advantages for some applications but is inferior when current dive capabilities are the aim.

The circuit below is a starting point. In practice it MAY be slightly more complex, but not much - and in many cases this circuit will work OK as-is.
Note that they do not show feedback connections - the output becomes the current buffered amplifier output and you take feedback from there, not from the opamp output.
Satisfy yourself as to how this works and then ask more questions.

Note that there is an about 2 x Vbe = 1.2V dead spot as the opamp crosses the V+/2 area. This is not seen in practice as the opamp output 'slews' top compensate but it can cause problems at higher frequencies. There are ways of removing this which are not shown here.

The circuit below shows the same principle used in a complete circuit with negative feedback applied from buffer output back to op-amp inverting input.
Circuit from here 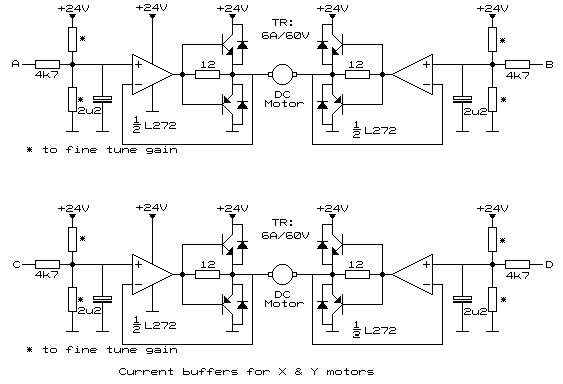 How do I design the circuit so I can drive a set amount of current to the actuator while maintaining a constant voltage gain?

For a fixed load impedance, you can't.

This is old, but I am going to take a shot at it because this question will stay relevant for as long as time.

You could simply cascade a voltage follower or push-pull complementary amplifier stage with the op amp. The unity gain stage will provide current gain.

However, as it had been previous pointed out, I believe this would be effective only at lower frequencies. The phase lags of the feedback network could render it useless in preventing crossover distortion. The slew rate of the op amp could be another limiting factor, if it's voltage response cannot sufficiently catch up during the crossover region.