Using all the taps of the transformer at the same time?

Let me clarify, I have a power transformer with 2x15V secondary (3 secondary terminals). I want to feed a full wave rectifier with 30 V (using the outermost 2 terminals), but at the same time I want to power a smaller circuit using 15 V (using the middle terminal and one of the others).

Is there anything that needs to be considered with this setup, provided I don't exceed the current ratings of the secondary? Is this safe? 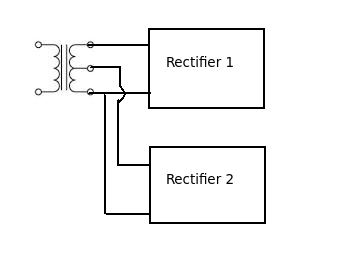 Do your circuits need to be connected to each other or are they completely isolated from each other?

If they are isolated, your approach above is just fine. But you have to do something different if the supplies share a common ground.

One approach that I use in my projects where I'm using both a full-wave bridge rectifier power supply as well as a center-tap power supply is as follows:

D1 is included because of a sneaky problem that caused me much grief many hears ago: I had a power supply in a product exactly as shown in the schematic except that C1 was about 1/10th the value of C2. That's because the current on the low voltage output was so low (perhaps 100mA) compared to the current coming out of the bridge rectifier supplying several amps. That low-voltage line connected directly to several PWM chips (no regulator).

We kept having sporadic chip failures in the field. Not many - maybe 1% of the installed equipment would have a blown chip (or more than one) maybe once per 12 to 18 months. But this problem meant that I had done something wrong.

I redid the PCB artwork several times over the next couple of years, thinking that I had somehow messed up the grounding somehow. No change in the failure rate.

I fussed with that circuit board for weeks, using a DSO to capture startup and operating characteristics while I fed the power transformer every nasty thing that I could throw at it. And I eventually found the problem.

What was happening was that the transformer core was keeping significant amount of residual magnetism SOMETIMES, depending at what point in the AC Mains cycle that power was switch OFF. If it did AND if power was applied at exactly the wrong point in the incoming AC waveform, I would see a significant NEGATIVE spike lasting only a couple of microseconds at the positive side of C1. This negative spike is what was killing the PWM chips.

Spike went away if C2 was removed.

Solution was to add diode D1. We did that as a cut-and-patch on all boards that came in to us for repair and we shipped replacement boards to every customer so that they could swap them out at their next scheduled maintenance time slot.

Moral of this story: include diode D1 even if you think that it isn't necessary.

It depends on how the two circuits interact with each other:

If the two circuits are completely independent of each other, then you only have the total current to worry about. If that's within spec, you're fine.

If they pass signals to each other that have a common reference, then you'll need to do some more homework. Consider both positive and negative half-cycles and watch for shorted windings through diodes and such. (I blew up a rectifier once because I only looked at the positive half-cycle before testing.)

However, you can achieve this with just one bridge rectifier anyway:

The center tap of the transformer automatically sits at a voltage midway between the positive and negative voltages produced by the bridge rectifier. If you ground V-, then V_mid is half of V+. If you ground V_mid, then V+ and V- become a bipolar power supply.

In any case, the transformer and the bridge rectifier both need to be able to handle the total current of the combined loads.

If you mean "bridge rectifier" (four diodes) for each rectifier, you will not be able to have a common ground between the supplies.

3
What is a secondary transformer?
3
Understanding the second transformer in PoE designs
2
Can an ordinary transformer be used for coupling the speaker with a transistor amplifier
0
Unknown transformer/function
2
Transformer rectifier set. A question about the schematic diagram
0
How to identify/measure a power transformer using signal generator and scope
0
Confusion about transformer spec
1
Does order matter in a center tapped transformer's windings?
0
Double secondary winding equal to center tap?
1
Why do I get high voltage (125V) between secondary of a transformer and oscilloscope ground clip?