I am currently working on a magnetic levitation project using a Hall effect sensor for distance measurement. I drive the coil using two 12 V car batteries in series to form a 24 V DC source, a MOSFET and a 3900 Hz PWM signal from my Arduino. 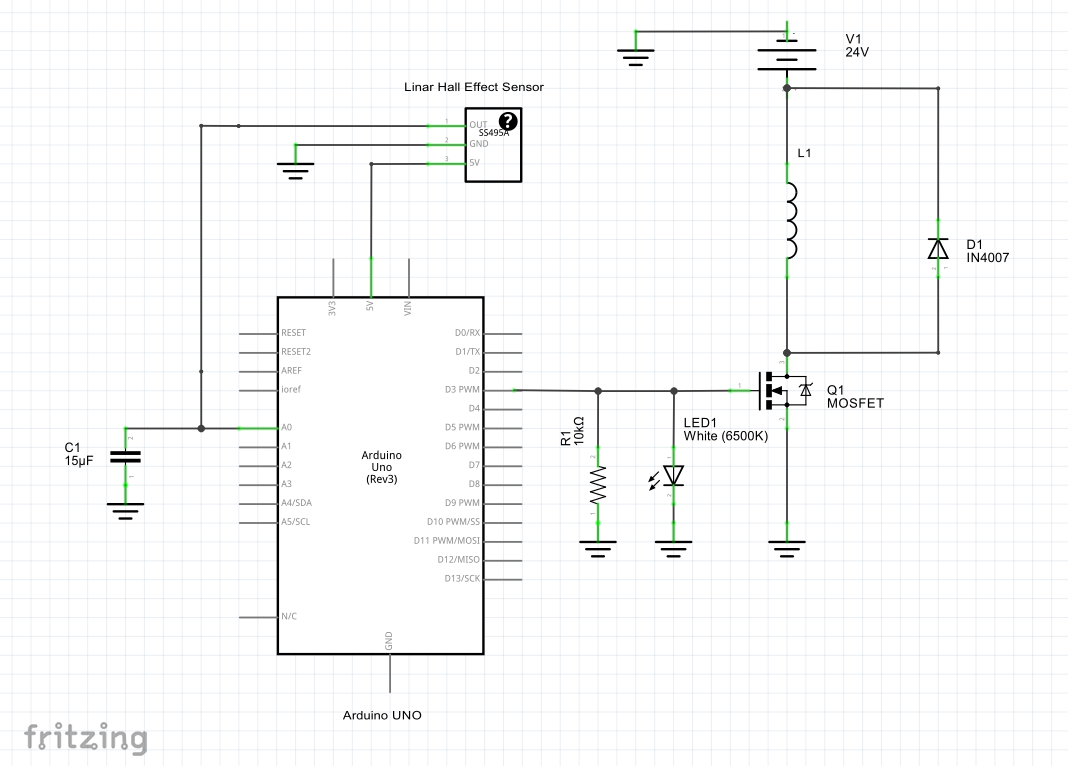 I reduced it a lot by adding a bypass capacitor to the Hall effect sensor output (C1):

However, I don't think it's clean enough to get a stable magnetic levitation.

Here is the code I use for the measuments:

Here are some pictures of my setup, as requested: 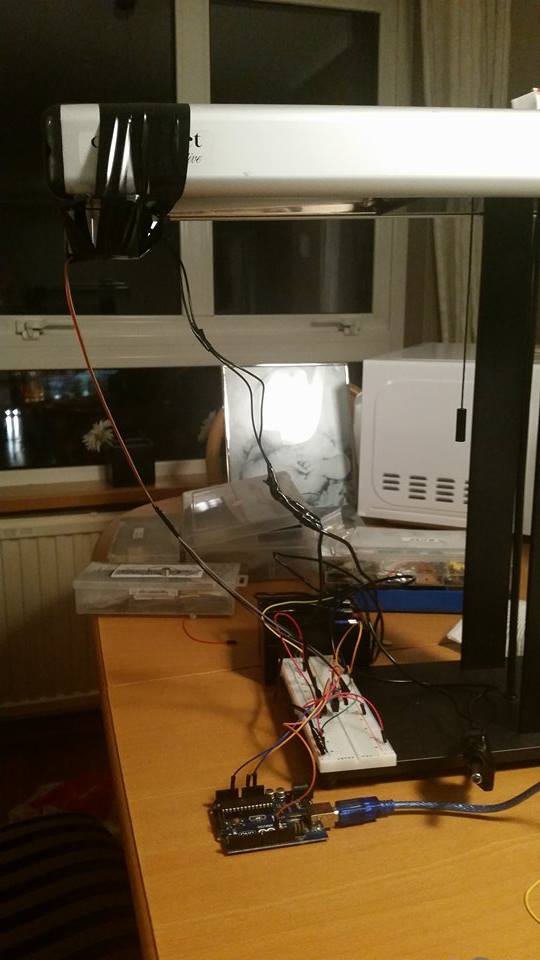 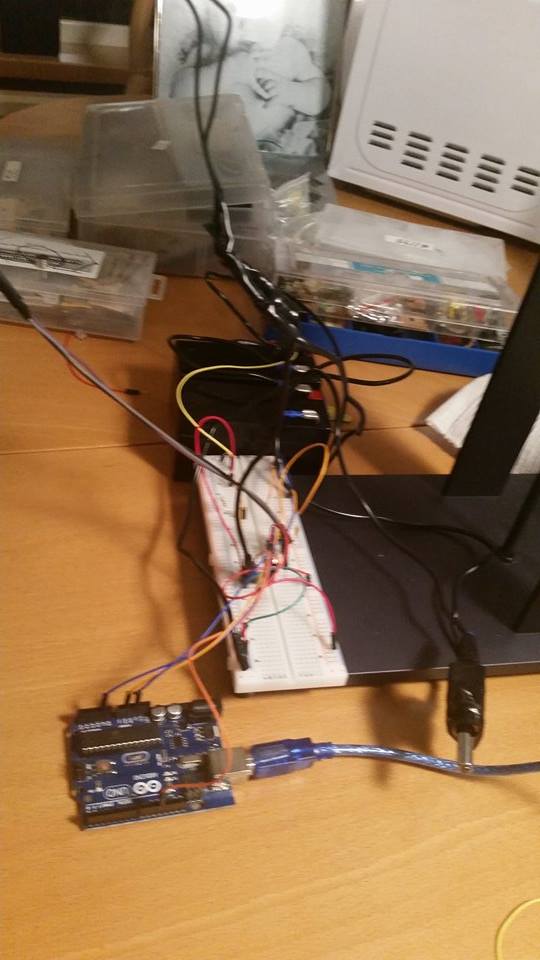 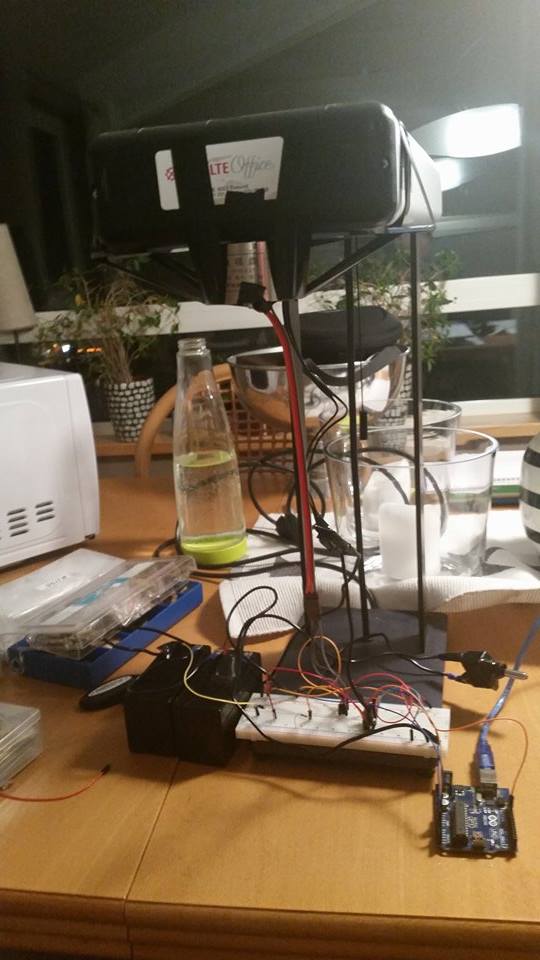 Here is a picture of the signal after adding a 240 Ohm resistor to the LED:

Later today i encountered a new problem. The output now looks like this:

I am a bit confused, because I have not really made any changes. Could it be that my batteries are running low?

There are several problems, some of which are mentioned in other answers. I'll reiterate them for completeness's sake:

Below is an attempt at addressing all of the shortcomings.

Let's say that we want to keep the mosfet switching times roughly at 2% of the PWM period. The mosfet should switch in approximately 2.5us. The low-pass filter formed by the gate drive resistance and the gate capacitance should have a time constant of, say, half that value. Thus, assuming a 1nF gate capacitance, we need an equivalent 200 Ohm series resistor in the gate drive circuit.

Ensure that the fast-switching current loop, drawn in thick line, is kept as short as possible. The decoupling C1 needs to be a low-ESR electrolytic. The snubber C2/R3 can be designed following this procedure. The buffer U2 can be 74HC1G125 or similar. It needs to have its power supply decoupled with a 47nF capacitor, and have its output enabled (OE# input driven low). U2 needs to be close to M1. To ensure fastest turn-off, the D2/D3 is a pair of back-to-back 27V Zeners. F1 should be sized to accommodate the power consumption of L1. The GND of U2 needs to be tied to the star point at M1's drain. Ideally you'd also have ferrite beads between U2's VCC and the 3.3V supply rail, as well as between the star point at top of L1 and the output of the fuse. The FB1 is a ferrite bead - choose the largest impedance you can find that will handle 100mA. 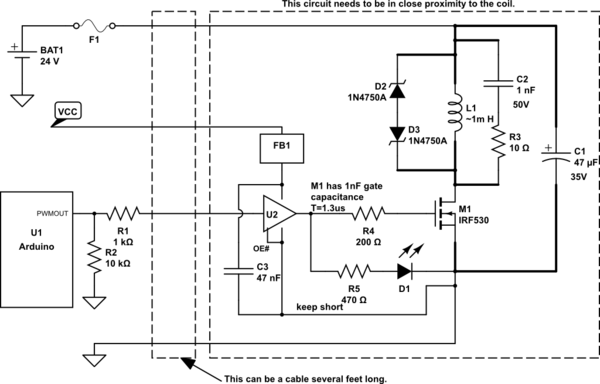 To minimize the Hall sensor's capacitive coupling to the inductor, there should be a non-magnetic, conductive shield around it. It won't hurt to make an explicit low-pass filter on the sensor's output, as well as decouple any high-frequency content with a ferrite bead FB2. Choose the largest impedance you can find that will handle 15mA.

I have added a representation of how the circuit might look on a breadboard. I've paid particular attention to minimizing the coil circuit's loop area. I've used 74HC14 inverters as a buffer, and I'm paralleling the outputs that drive the LED and the gate.

Due to 123D Circuits' limitations, I had to:

I'm not sure what's in the Arduino on that PWM output, but it looks very odd to apparently have no gate resistor into a MOSFET, and no current limit resistor on the LED.

At the point you start to turn onto the MOSFET, you have a short-circuit to ground in the form of the gate capacitance - on a big MOSFET that's quite a lot of capacitance, and while that's charging, the Arduino's working very hard indeed to supply that current.

Once the gate capacitance charges enough to reach the forward voltage (Vf) of the LED, that turns on and represents a short-circuit to Vf.

I couldn't say whether either of these things is causing noise on the analogue input, but they're unlikely to help, as they're probably causing a lot of noise on the Arduino.

Separately, and I don't know if you're already doing this, but in this type of system I would usually try to arrange to take the analogue measurement synchronously with the PWM, so that I could consistently avoid the noise around the switching of the load. If you're sampling asynchronously to the PWM, that may well be the cause of occasional big spikes.

Not the answer you're looking for? Browse other questions tagged arduino mosfet noise coil hall-effect or ask your own question.

4
How to have an Arduino wait until it receives data over serial?
0
Weird Hall Effect Sensor output
0
problem of transmitting data from serial device to bluetooth on Arduino
1
Arduino - Pulses get unstable when updating PWM duty-cycle
0
Current from Hall effect sensor
0
Hall Effect Sensor Current Output
3
How to reduce sensitivity of a Hall Effect Sensor?
1
IssuesFlashing AT Firmware to ESP8266 chip built onto Arduino Mega board