Would T feedback network of transimpedance cause serious distortion?

I am now designing a transimpedance using ADA4062-2 to detect signal from a photodiode. The first image is the equivalent circuit.

My target is to measure the amplitude and the phase of 2kHz sine wave. As the signal is quite small, I decide to use T feedback network. However, I found that the phase of 2kHz would change a lot, especially when a is set to be near 90 or 270 degree.

I doubted that it may be due to the T feedback network. So I substitute the T network with equivalent resistance(the second image). And luckily the phase change is gone.

But I don`t know why would the T feedback network affect the phase. Distortion? or any other reason? Does any one have idea about it? Thank you very much! 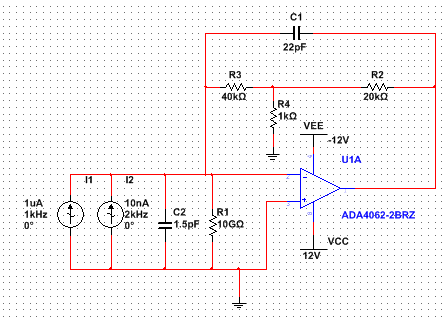 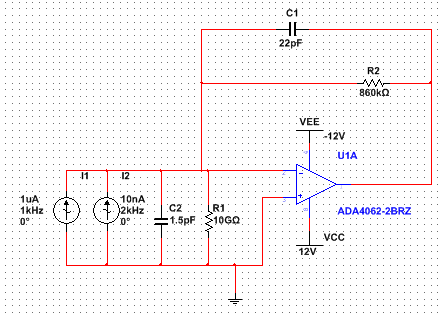 Billyzhao, you cannot simply replace a capacitive bypassed T-network with a corresponding resistor (also bypassed) - and expect the same behaviour. This can be shown on a simple intuitive way: In the first circuit the left side of C1 works upon the input network in parallel to app. (40+1)=41 kohms. In the second circuit you have 860k in parallel.

Both circuits are equivalent only without the bypass capacitor.

Not the answer you're looking for? Browse other questions tagged amplifier distortion or ask your own question.