Matching an amplifier to speakers and subwoofer [closed]

I've got a couple of old Bose speakers and bass and I'm looking to wire them with an amplifier so I can use them with a computers sound card. The speakers' manual can be found here.

For the speakers: they are rated 4-8 ohms and 10-200 watts per channel. I was wondering if either of the following amplifiers would be good enough to drive the speakers at decent volume with decent sound quality: amplifier 1 or amplifier 2.

Also, correct me if I'm wrong, but I could connect a potentiometer in between the audio source and the amplifier input to act as a volume switch.

Thanks for the help.

Both those amplifiers will work fine, depending on what you mean by 'decent volume'. Neither of them are especially powerful though, so you might want to go for 30W per channel instead.

However, there a couple of other things to consider before you go ahead. The second amplifier is based on a TDA7297 IC, which will require a largeish heatsink or it will be destroyed (and destroyed quite fast, don't even turn it on unless you have the heatsink attached).

You'll need to consider power supplies too, and although the datasheet for the TDA7297 shows a single-ended power supply, the board illustrated on DX.com shows +/- 12v inputs. I've no idea what's going on there, there's a diode on the board too so perhaps it's supposed to be connected directly to a transformer? DX.com don't give much away though. I understand some people just use a 12v laptop charger, which is almost certainly the cheapest option.

Looking at the linked pdf, I'm wondering why you wouldn't just connect the amplifier to the speakers as Bose suggest? The bass unit almost certainly contains a crossover network, to send the bass to the bass drivers and the high end to the smaller units. You'd want to use that.

Regarding the volume control, you would want to hook up your inputs using a circuit like the below: 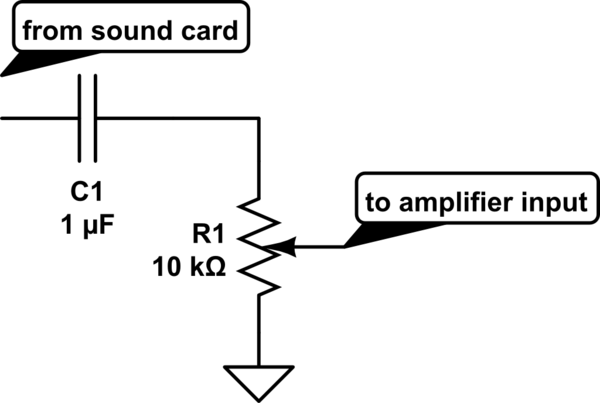 This will provide volume control, but depending on the output level of your sound card you may not get the maximum out of the amplifier. The capacitor is somewhat optional, and is there to prevent any DC current causing a problem. Personally I always put it in, even if I know for a fact that there will be no DC in the output. Like the value of the potentiometer, it's value isn't especially important. Make it too small however, and you'll start to lose bass response. I personally go for 1uF, because I happen to have a bunch of them lying around.

Myself, with speakers like those, I'd go for something with more grunt than a 15w per channel amplifier. But those boards are pretty cheap, and you've probably got an old laptop supply around somewhere. Just buy both, hook them up, don't bother with the volume control (the computer has a volume control already, right?) and report back. My guess is they will both work acceptably.

Not the answer you're looking for? Browse other questions tagged amplifier audio speakers or ask your own question.