I'm trying to create a variable wattage heater circuit as shown below. I'm clearly not a trained electrical engineer (simply a hobbyist) so please forgive my crazy idea and general stupidity. You can imagine R1 as a light bulb or a toaster, or whatever you like. The goal of the circuit is the idea that you can replace R1 with a heating element with a resistance of anywhere from 0.05 ohms (uncommon), to 0.1-0.3 ohms, and control the wattage of the heating element to be something like 150-250 watts by only partially turning on the MOSFET via a voltage regulator at the MOSFET's gate. 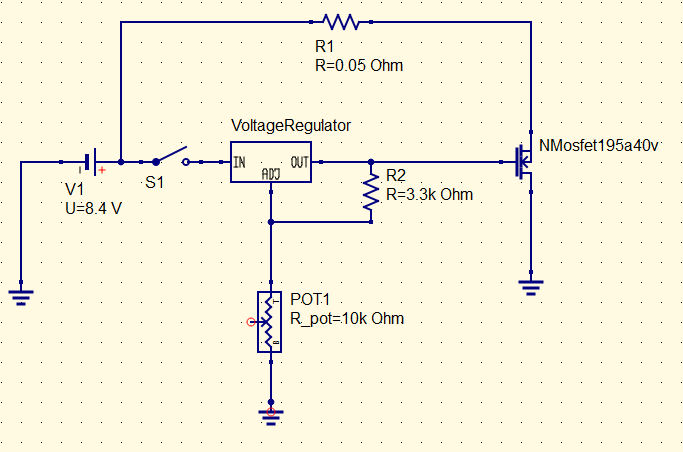 (power is supplied by two high-drain Li-Ion batteries in series. yes this is a lot of load for these batteries, but yes they can handle it in pulse situations.)

I've built a few prototypes, and as some of you have probably already guessed, I keep blowing MOSFETs. I've been using a MOSFET which supposedly handles around 200a continuous, which would be more than enough for this purpose, but evidently when the MOSFET gate isn't saturated, the resistance it creates dissipates a ton of wattage as heat. After a few seconds, the gate breaks down and the MOSFET conducts (like crazy) regardless of the absence of gate voltage.

So my question is, how do I achieve the goal of this circuit? I assume I could use multiple MOSFETs to disperse the load between them, but the overall dissipation would still be the same, which is unacceptable in a handheld device.

Could I use the rapid switching capabilities of the MOSFET to create perceived adjustable wattage at R1? Would this solve my power dissipation issues? I'm just starting to learn about gate drivers, but are they capable of varying switching times with simple input like adjusting a reference resistance via a potentiometer? Or do they always require an MCU (way beyond my capabilities) to tell them what to do? What kind of switching speed range would I need to achieve my goals?

I know I can use DC-DC converters to get similar results by adjusting the voltage at R1, but there's virtually nothing commercially available that will handle the necessary amperage and cost less than $500 or so. Hence the goal of using a comparably cheap MOSFET to control the current (rather than voltage) in a circuit that simply provides more voltage than I need.

Alternative answer without PWM. (First, I absolutely agree that PWM is better : it's more power efficient, meaning less heat to get rid of, and less stress on the batteries and better battery life).

However, power MOSFETs can be used in their linear mode.

As you've discovered, in their linear mode they dissipate a lot of heat. Let's say for the sake of argument, you're running an 0.1 ohm load, at full power that would be 8 volts, 80A, (640W) with the MOSFET fully on. But you want to control the power - the worst situation would be half power - sharing voltage equally between MOSFET and load, 4V,40A,160W in each. The load can presumably take it - the naked MOSFET can't... unless you dissipate that heat safely in a heatsink.

Basic heatsink math : each part of the system has a "thermal resistance" which drops temperature (not voltage) as heat power (not current) flows through it. Working back from ambient air temp, you can calculate how hot your FET is, and its datasheet tells you what it can tolerate. (I picked the IRF540 as an example, I don't know your FET.)

Second test : With a heatsink. How big?

First you have to get heat from the junction to the case... Datasheet shows: "Thermal Resistance : Max Junction to Case: : 1C/W". At 160W we need a bigger MOSFET so I'm going to reduce the power to 40W for this calculation - with your MOSFET, YMMV. (You CAN parallel MOSFETs, but each would need slightly different drive voltages so it's not easy, but you could use 4 of these each on its own heatsink).

So the heatsink must not be allowed to exceed 100C, with air temp of 20C that means the resistance of the heatsink must be less than (100-20C)/40W = 2C/W. Aim for better than this - say 1.5C/W - because I glossed over how well heat got from the case to the heatsink for simplicity.

Now we can look up heatsinks better than 1.5C/Watt. Here's an example: it's about 6 inches long and 2 inches high. For 40W. I'll let you run the numbers for your MOSFET and power levels...

555 will probably work fine. Keep switching frequency low : for a heater, 1Hz may be good enough - or 10Hz or 100Hz. This minimises switching losses (while the gate is charging, and the MOSFET is somewhere between On and Off.)

Don't bother with a control voltage, just control the ON/Off ratio directly with the pot. (you may add resistors at either end to keep it working with the wiper at each end). Build and test that without the MOSFET, then add the MOSFET and check the gate voltage with a high load (10 ohms) then finally a real load.

And use a heatsink ... though you should be able to get away with a smaller one!

After many tests I found a very simple but efficient way to calc MOSFETs to be used in linear mode.

All we need to know is the RDSon (on-Resistance between Drain and Source) and ID (continuous nominal drain current, I recommend to pick this value @100ºC from datasheet, not the 25ºC one).

With both values in hand we can calc the maximum dissipated power on the MOSFET in it's limits using Ohm's law:

In my tests the MOSFET blown just above the calculated value, but I didn't tried many types of MOSFET, and this calc is to use it without a heatsink (I used a huge heatsink in some tests, but it didn't worked different to me. My guess is that there is too much power getting out the chip itself when you get above calculated power, but I'm not an expert).

Anyway, respecting the calculated power limits it worked very well to me in every test.

As you have found, the problem with a linear regulator is that to soak up the excess voltage it must dissipate a lot of power. This is the same whether you use a MOSFET, bipolar transistor or a rheostat - anything that acts like a resistor must draw the same power as a resistor.

The answer, as you have guessed, is to switch the FET fully on and off so that it is not passing current and dropping voltage at the same time. If you switch it on and off rapidly enough then the heating element will act the same as if it was receiving the power continuously. You can then vary the pulse width ratio between 0% and 100% to control the average power in the load. This is called PWM (Pulse Width Modulation).

Any circuit that produces a square wave of sufficient amplitude and varying on/off ratio will work. An NE555 timer IC could be forced to do the job, but it can be done better using a dual op amp or comparator with a few resistors and capacitors.

Here's an example. U1A generates a triangle waveform on C2, and U1B compares it to the DC voltage on pot2 to create a variable pulse width (Pot1 just adjusts the frequency, and could replaced with a fixed resistor in your application):-

Not the answer you're looking for? Browse other questions tagged mosfet high-current mosfet-driver or ask your own question.

0
Achieving higher current at the lowside MOSFET to pulse LED
7
How to increase mosfet switching speed, and decrease switching losses?
3
How to prevent MOSFET from operating in high resistance part of linear mode?
1
Active load with mosfet and op-amp
1
MOSFET driver without gate resistor
0
Mosfet blows on high load using gate driver
1
Is it possible to use an H-bridge IC as dual MOSFET driver?
2
Calculating the MOSFET gate resistor for an H-bridge driver