least GSM power in dBm required to send an SMS

I deploy an application in the forest using an M2M module (SIM968). I have read through its datasheet but I am not able to find out what is the least GSM power that should be incident inside the forest to perform a simple SMS transmission or a GPRS transmission. (I guess both use 2.5G technology, please correct me if I am wrong)

Attached is the 2.5G coverage map of the network provider and I am interested in knowing if I would be able to transmit am SMS or perform a very small (of 10-15 bytes) TCP/IP transmission when the coverage is at -105dBm. 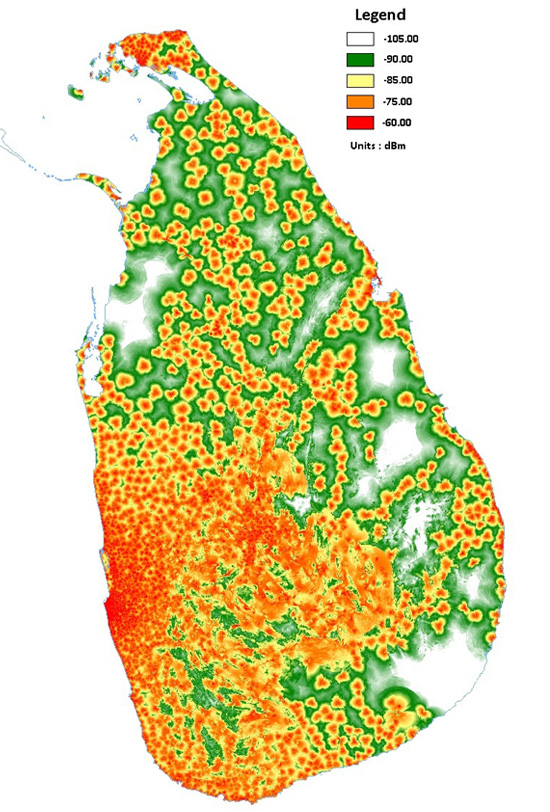 I had a conversation with a network engineer of a respective provider, he advised their cut off point is at -102dBm.

"I had a conversation with a network engineer of a respective provider, he advised their cut off point is at -102dBm."

That is indeed the minimum receiver sensitivity figure for a class 4/5 GSM900 mobile station in GMSK mode. If you wish to read the full performance specs, you may consider downloading the 3GPP TS 45.005 pdf (Old ETSI TS 145.005 ref). 3GPP download.

Chapter 6 deals with receiver performance. Remember that a test if the receiver conforms is typically done in a lab environment with a radiocomtester like an R&S CMU200 or Agilent 8960. These instruments simulate a GSM base station including signal fading and (Gaussian) noise conditions like present in a real-life situation (patterns & figures specified in the document above). Nevertheless real conditions can still be worse.

Without knowing the actual system details you can always have a very coarse performance estimate of a random radio receiver with the following equation:

Channel coding, SNR and other factors further influence this figure, either positive or negative.

You don't need to worry about this. The system determines this (GPRS protocol). On a radiocomtester (see below) you can set this manually but a public network doesn't allow that.

This is not a receiver but a radiocommtester like this one or this one. This instrument has all the functionality of a BTS and also includes a fading and noise generator capable of generating real-life conditions. This comtester can answer a call from, or initiate a call from the MS in the exact same way as a normal cellular network except that data is generally not speech/SMS but usually bit patterns (PBRS). To perform a receiver sensitivity test the MS is generally put in loopback mode via an AT command (sent via a PC through the serial port of the device). The MS sends the bit pattern generated by the radiocomtester back via the uplink. The radiocomtester compares the original bits with the received bits a calculates the BER, FER, etc. By reducing the output level of the comtester you can determine the level where the communication breaks down.

RF engineers who are still in the phase of developing a frontend also use what is called a Vector Signal Generator, Vector Signal Generator. This instrument can generate a GSMK (or other) signal modulated with a fixed data pattern or PRBS. They usually have their own way of determining the BER or FER since only a downlink path exists.

Yes, but such tests are typically done in what is called 'conducted mode' where the antenna of the MS is replaced by a small connector connected to the comtester via a short stretch of coax cable.

Radiated versions of such tests exist, but generally take place in a anechoic chamber, usually by a full conformance/performance test system way beyond the capabilities of an average application developer.

No, the figures you see in the document are receiver input levels. An antenna is a passive device and can never amplify the signal. Antenna gain is not real gain but the relative gain with respect to an omnidirectional antenna. A better antenna factor can increase the level at the receiver input with respect to the prevailing field strength at that location, but never the field strength itself, of course.

Finding a doc in there is indeed looking for a needle in a haystack. Here.

You can use one of the following devices as measurement receiver:

You have to keep in mind that these devices measure the level (dBm/dBμV) at the receiver input. If you wish to obtain the actual field strength (dBV/m) you have to scale the measurement values with the antenna factor and path losses. This article explains the conversion. Plenty of other, more comprehensive sources, out there.

If you wish to take the cable/connector loss into account either take the insertion loss data from the manufacturer (cable, connectors) or better, calibrate the cable with a RF generator and RF power meter or Spectrum analyser.

Not the answer you're looking for? Browse other questions tagged rf gsm or ask your own question.