connect series of batteries in parallel?

I have eight sealed lead–acid batteries connected to my photovoltaic array in the way you can see in the image below.

A friend told me, that it was a bad idea to put those light-green cables in the middle. I put those, because I thought that this would equalize voltages when one of the batteries is loaded faster or unloaded faster due to wearing. Because I’m afraid, that if one battery’s voltage is very low (kind of short circuit in the battery), the one connected in series would be damaged due to overloading. 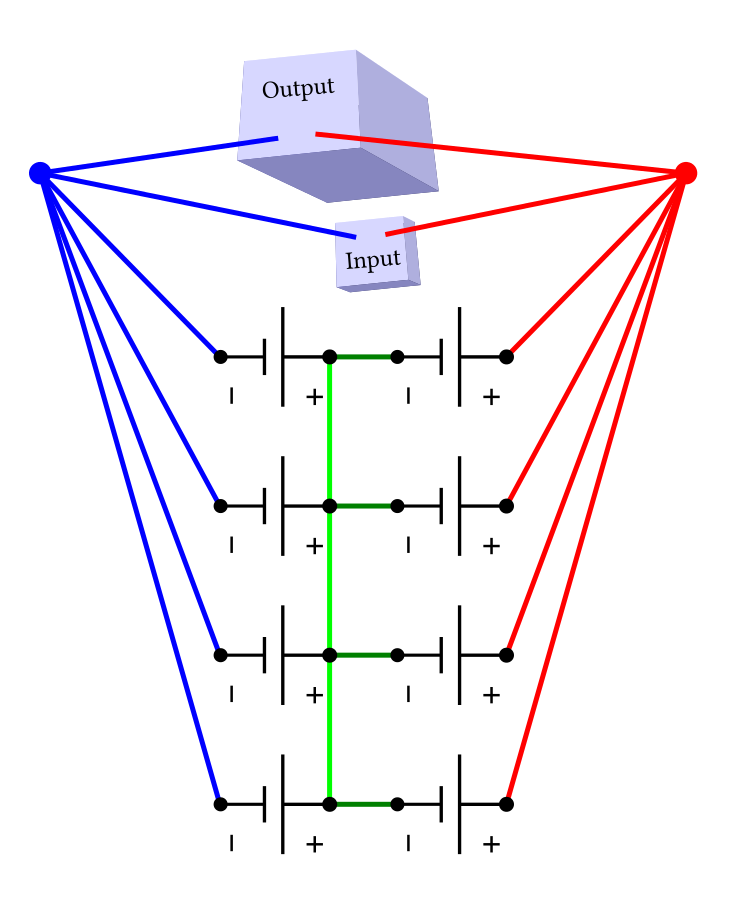 My question: Is it a bad idea to have those light-green cables connected in the middle in parallel?

(The input is a MPPT/battery charger and the output is an 230 V inverter.)

This is one of those best-practices arguments that never actually gets a really good answer. There is nothing technically wrong with having that light-green jumper installed. But the problems start when you begin to consider the failure modes of the batteries.

As lead acid battery ages, its internal resistance increases as things build up on the plates, and the plates themselves begin to break down and change shape. Eventually, the plates will fail, and you will probably wind up with a shorted cell in one of those batteries. If it goes open (which is rare), all is well and you just lose the capacity in that set - but you have to consider the short as the most dangerous possibility.

When this happens, if that jumper is installed, the half of the batteries on the same side as the faulted pack are going to discharge through the dead battery with virtually no resistance. This can be an incredibly bad thing, potentially resulting in a catastrophic discharge, and possibly exploding cells.

With the jumper out, you still have the entire bank of batteries discharging itself, but it would be reduced by the internal resistance AND voltage of the other battery in the line that didn't short out. Any resistance is better than no resistance, and the voltage reduces it even further, so the battery pack you are worried about protecting is actually needed to prevent a potentially devastating current flow.

Of course, it is worth pointing out that what you have done is technically no worse than paralleling any number of single battery packs. But the internal short problem is the primary design consideration that makes almost every battery bank go in series first, and then add banks in parallel - it helps that those lead acid batteries themselves are a number of cells in series, packaged as a single unit.

So, from a best practices perspective, you really should remove that jumper. Any compromises made to protect equipment, in this case, merely endanger other equipment in a different way, and create new concerns about your safety.

On the other hand, if you're just trying to keep them balanced better, then adding the green wires is a good idea. They turn your system from 4 separate 2S batteries into one 2S battery. This means that if one battery has less capacity than the others, the other three in parallel with it will help prevent it from seeing high over-voltage when charging and a negative voltage when discharging.

I don't see any advantage to adding those green wires - they just make the whole assembly more complex, and make it more difficult to remove a defective battery.

Not the answer you're looking for? Browse other questions tagged battery-charging parallel series or ask your own question.