I've created the circuit shown. I'm using a 9V battery (actually throwing out 9.53V) and 5V coming from an Arduino to test with both 9 and 5 volts. The transistor is a BC 548B (datasheet I'm using is here). 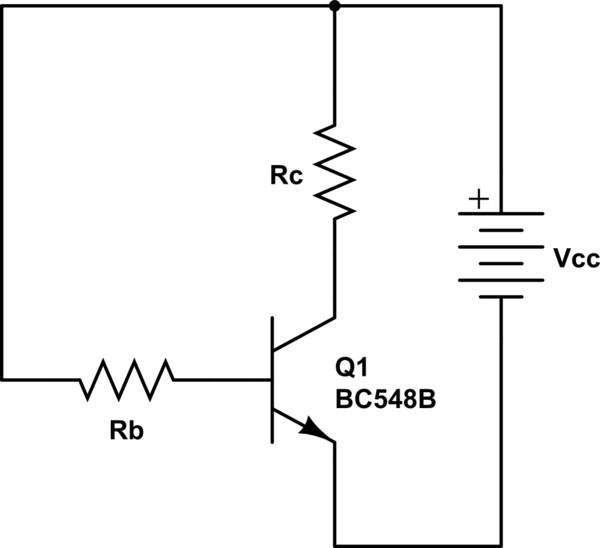 I've conducted a number tests changing the values of Rb and Rc with the following results, no idea if they're actually right though.

My questions are as follows;

The big point you seem to be missing is that you shouldn't be worrying about the exact gain. A good circuit with bipolar transistors works with the minimum guaranteed gain over the intended operating region, but otherwise works fine with the gain being anywhere from there to infinite. It's not out of line for any one transistor at a particular operating point to have 10x more gain than the minimum guaranteed by the datasheet. After taking that into account in the circuit design, it's really just a minor step to make sure the circuit works with the transistor's gain all the way to infinity.

When the transistor is used in it's "linear" region, then negative feedback is used to convert the large and unpredictable gain to a smaller but well controlled gain. This is the same principle used with opamps. The DC and AC feedback may be different, with the first setting the operating point, sometimes referred to as biasing the transistor, and the second controlling what happens when the desired signal is passed through the circuit.

Here is a example circuit that is tolerant of a wide range of transistor gain. It will amplify small audio signals by about 10x, and the output will be around 6 V.

To solve this manually, it's probably easiest to do it iteratively. Start by assuming OUT is 6V, and work from there. Since the gain is infinite, there is no base current, and the base voltage is set directly by the R1-R2 divider from whatever OUT is. The divider has a gain of 1/6, so the base is at 1.00 V. Minus the B-E drop of 600 mV, that puts the emitter at 400 mV, and the emitter and collector currents at 400 µA. The R1-R2 path draws 50 µA, so the total drawn from OUT it 450 µA, so the drop across R3 is 4.5 V, so OUT is at 7.5 V. Now go through the above calculations again assuming OUT is 7.5 V, and maybe one more time after that. You will see the results converge rapidly.

This is actually one of the few cases a simulator is useful. The main problem with simulators is that they give you very accurate and authoritative looking answers despite the input parameters being vague. However, in this case we want to see the affect of changing just the transistor gain, so a simulator can take care of all the drudge work for us, as performed above. It's still useful to go through the process in the previous paragraph once to get a feel for what is going on, as apposed to just looking at the results of a simulation to 4 decimal places.

In any case, you can come up with the DC bias point for the circuit above assuming infinite gain. Now assume a gain of 50 for the transistor and repeat. You will see that the DC level of OUT only changes a little.

Another thing to note is that there are two forms of DC feedback, but only one for the AC audio signals.

Since the top of R1 is connected to OUT, it provides some DC feedback that makes the operating point more stable and less sensitive to the exact transistor characteristics. If OUT goes up, the current into the base of Q1 goes up, which makes more collector current, which makes OUT go down. However, this feedback path does not apply to the audio signal. The impedance looking into the R1-R2 divider is R1//R2 = 17 kΩ. The high pass filter rolloff frequency formed by C1 and this 17 kΩ is 9.5 Hz. Even at 20 Hz, R1//R2 isn't much of a load on the signal coming through C1, and it gets more irrelevant proportional to frequency. Put another way, R1 and R2 help set the DC bias point, but don't get in the way of the intended audio signal.

Go ahead and simulate this circuit while varying parameters of the transistor. Look at both the DC operating point and what the overall transfer function from IN to OUT of a audio signal is.

1. What causes the apparent beta decrease as the base current increases?

2. Where does the datasheet describe the behavior of beta vs. temperature and \$I_C\$?

This datasheet does not give any information on how beta varies with temperature. Beta vs. Ic is discussed in question 4 below. I checked a few other datasheets and didn't see any temperature variation there, either. According to this app note, beta increases by about 0.5% per degree C. A more detailed understanding might require use of the Ebers-Moll model, which includes temperature in the form of the thermal voltage (kT/q). I'm not a BJT master, so perhaps someone else can clarify this. 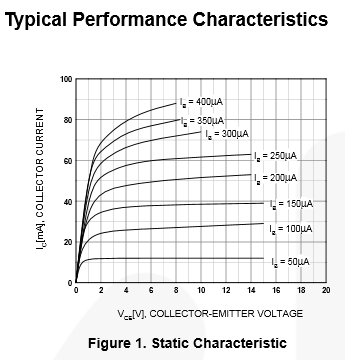 This section of the datasheet gives typical performance characteristics. These are average values that do not show the variation from unit to unit. A typical graph gives you an idea of an average unit's behavior, but it does not in any way give actual limits on that behavior. That's what the Electrical Characteristics table is for.

4. How can beta be greater than what's shown in the datasheet's Figure 3? 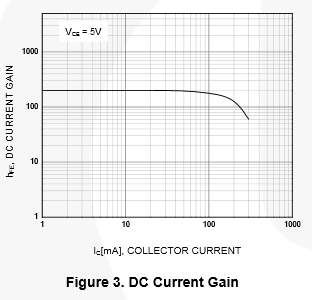 Two things are happening here. First, your Vce is not actually 5V in your 5V table, since some of the voltage is being dropped across Rc, so this figure does not represent your actual circuit. Second, this is another diagram showing typical behavior. What it shows you is that beta typically starts to drop off at around Ic = 100 mA. Since the absolute maximum Ic is 100 mA, this means you should expect beta to be roughly constant across the current range of the device. The figure uses 200 as a typical beta, but as you can see from the hFE Classification table, the beta for an individual BC548B could be anywhere from 200 - 450.

5. How can an Arduino be used to drive the base of this transistor?

First, you'll need to get the maximum continuous output current from the Arduino's datasheet. This will probably be in the milliamp range. Your base current must be less than that, which shouldn't be a problem since beta > 200 and Icmax < 100 mA. If you know how much collector current you need (which you should), you can figure out the minimum base current:

That will let you pick a base resistor. According to the transistor's Electrical Characteristics table, the Vbe should be around 0.7 V. You know your Arduino outputs 5V, so now you can use Ohm's Law:

Supplementing the information given in O. Lathrop´s answer I like to give a short example that may surprise you:

Let`s assume you have designed a simple gain stage (as shown in your post) using a transistor with a current gain of beta=200. The quiescent dc current is Ic=1mA and the measured voltage gain (Rc=2.5kohms) is G=-100. Now - if you change the transistor having a lower value beta=100 you will observe that the voltage gain G will NOT change - provided you have tuned the bias resistor RB to a lower value that allows the same quiescent current Ic=1mA. (This is necessary for a fair comparison).

The reason is as follows: The voltage gain is determined by the transconductance gm of the transistor (slope of the Ic=f(Vbe) characteristic). That means: The "current gain" plays no role - lowering the beta value from 200 to 100 increases the input current only, without influencing the voltage gain (as long as the operating point does not change).