I am hoping that this is the right forum for questions related to radar systems.

The radiation pattern for an antenna is (a plot of) the relative strength of an emitted antennas signal as a function of the direction out from the antenna.

However a radar "target" will also have its own radiation pattern in response to an incident wave. The relative strength of the reflected waves will depend on the direction from which they are viewed, as well as the direction of the incident wave. I have come across the term Radar Cross-section, but I am not sure if this is the correct term for what I need to describe(Particularly since I'm not ultimately describing a radar system).

So does anyone know a term for the "radiation profile" of a wave reflecting object as a function of both incident and reflected wave direction?

I would use the term "Polar Response" or "Polar Gain Response". Typically it is graphed as such: 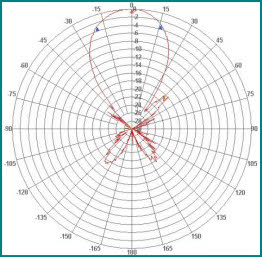 Where 0 degrees (straight up) is along the main axis of the antenna.

The correct term seems to be RCS pattern: "the term RCS pattern refers to the manner in which a specific target at a specific frequency varies in reflective signal level as the target is rotated."

"Radar cross-section" - a.k.a. "signature" in common usage - is the correct term for the radiation reflection characteristics of a target in terms of amplitude with respect to angle of incidence of propagation for a given frequency. The term "polar response" describes a related yet distinct concept in terms of signal reception, as opposed to re-radiation of signals.

The term you're looking for may be target "signature".

Not the answer you're looking for? Browse other questions tagged radio wave terminology or ask your own question.

28
What does the term “bias” mean?
10
Was the term “shield” in use [for daughterboards] before arduino became popular?
0
Closing the loop and creating the current in antennas
1
Correct Term for “shorting a resistance to start a diesel motor”
1
Calculate radiation power of an antenna in respect to a given antenna radiation pattern and a given angle
3
Is there an industry term for IC “drop-in” circuits used for malicious or clandestine purposes?
2
Radar and Standing Waves