Shut down regulator during sleep

I'm working on a wireless sensor network and would like to know what it would take to shut down the regulator during deep sleep.

I'm planning on going 3.3v, because I will allow the user to push a button to display readings locally on an LCD and that is saying it needs 3.3v. Otherwise I would go lower. Everything else supports 1.8v.

So my question is, if I have a node deep sleep, can I set the EN pin on the regulator low and depend on either the power supply caps or the inductor to to retain enough power to keep the MCU alive so it can wake up in 5 minutes? How do I know how long I'll have? Should I throw in a supercap too? Is it even worth it to try to turn the regulator off, or when there is no draw will it not burn energy?

Peak current will be under 200mA. When sleeping, nothing should be running except the MCU in stop+RTC or low power run mode, which is, according to the datasheet, 1.2 uA and 9uA, respectively. I'm sure some inefficiencies in my design will require wiggle room.

Thanks a lot and any feedback on any of the above is greatly appreciated.

This particular regulator features a power save pin (PS), which will switch the working mode over from constantly regulating into a mode where only short bursts of current are provided to boost the voltage above the set voltage point.

If your components can handle the extra voltage, that might be worth a try. I'd add some more capacity to the output to increase the off-phase of the regulator to reduce the needed current even further. 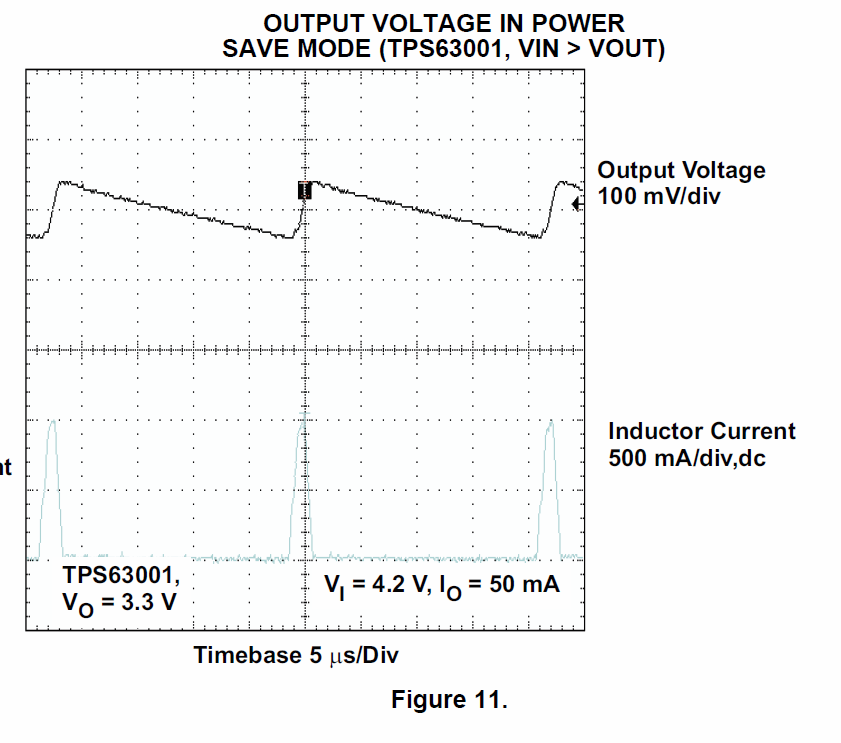 This is the time, a 100µF output capacitor would need to drop from 3.38V down to 3.3V witha load of 10µA (neglecting voltage dependencies). And the regulator would be on only some 5µs, so it is basically off the whole time.

As mkeith mentioned it might be worth considering a LDO, something like a TPS72733 which will have a quiescent current of 7.9µA (there should be some around going even lower). They have a high efficiency for battery powered applications and are a lot cheaper than switchmode regulators. The efficiency is roughly 88-89% at 3.3V out and 3.7V in and 200mA load, but only about 50% if the load is as low as the quiescent current and shutdown is not usable (depends on how the chip implements it). However you will loose the ability to drain the battery below 3.3V + dropout voltage (130mV @ 200mA for that part) which will decrease the interval at which the batteries have to be recharged. But on the other hand the batteries will last more recharge cycles if not discharged so deeply.

It should be noted that batteries like a constant low current draw more than a spiky high current draw, so the LDO might increase the interval again - but with the batteries you are going to use, drawing 1A for some microseconds should be fine. Battery lifetime is quite complex and not easy to predict, so to really find out, you'd probably need a prototype with both regulators and see what happens.

You can also measure the leakage current, and figure out the time but after that you still need to test it to make sure it works.

Not the answer you're looking for? Browse other questions tagged low-power sleep switching-regulator or ask your own question.

2
How to efficiently power wireless sensor node from a 9V battery?