Phase shift and its importance in audio amplifiers

The audio source is a car radio with 1V p-p signal. I firstly feed that sigal through a band-pass filter with corner frequencies at about 20Hz and 200Hz. This is how it looks like in LTspice:

Upper three op-amps are configured as high-pass and lower three as low pass active filters. The frequency response of the circuit looks good, but there is -100 to -1300° phase shift. I am wondering what is the importance of phase shift in such amplifiers? Can I just ignore it or should I compensate for it? How would I go about compensating the phase shift?

This is a picture of plotted group delay vs frequency.

You've got it 800 degrees out of phase even at 100Hz where your amplitude is at 0 db. This is going to cause relative distortion between different frequencies of the music you play because your higher frequencies will be going through a different filter will likely less phase shift. The distortion may be less noticable because it's at the low spectrum. It should only moderately distort your music. If you were an audiophile trying to make a really nice sound system, then this wouldn't be the way to go, otherwise, this will likely work fine.

If you want to remove the massive amount of phase shift, you'll want to find different topologies of filters that don't require you chaining 6 in series each additively increasing your total phase delay. You may look into the biquad filter topology: http://en.wikipedia.org/wiki/Electronic_filter_topology#Biquad_filter

Filter design is all about tradeoffs between amplitude, roll-off, phase-shift, and complexity of design.

EDIT: From more research on experimental results and even though they don't go down to 100 hz here, I doubt you can handle the amount of delay you're adding in. Experimental research

You have 20ms of delay (800/360*1/100=22ms) and that significantly higher than the thresholds talked about in the paper. Futhermore, if you have 180bpm music, that's 3 beats a second, and you'll end up with your delay being 1/15th of the time between beats. That's a significant delay that would be very audible I think. I would revamp the design if I were you if you were actually going to build and use this.

Brian recommends a great idea if you use a linear phase filter, you'll just add in an overall delay to your signal rather than delaying some frequencies more or less than others.

This is a block diagram representation of that: 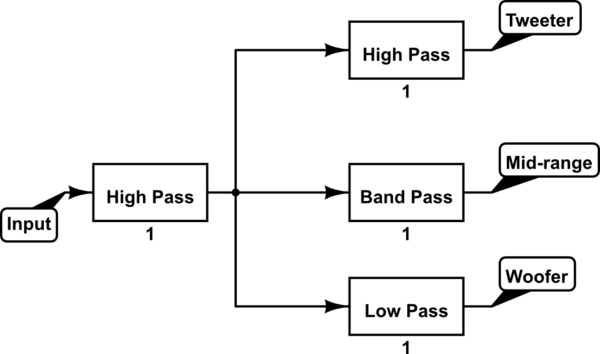 simulate this circuit – Schematic created using CircuitLab
The first high pass filter needs to be linear phase and is the one that protects your woofers from too much amplitude at the low end. The rest of the filters are designed solely for the individual output stage. This roughly halves the potential phase delay between your signals while still achieving the desired results.

The main trouble with phase shifts is where the same signal arrives at the listener via two signal paths, and there is a different phase shift in each. In that case, if there is a 180 degree phase shift between the two signals, (and they have the same amplitude) they cancel out, and the signal (at that frequency) disappears.

That certainly can be audible, and it can be worth delaying the earlier signal with a phase shifter to keep them in phase.

It's often more useful to work out the phase shifts in terms of group delays : for example a 360 degree phase shift on a 200Hz signal is 5 ms (1 full cycle) and a 1080 degree phase shift would be 15ms. Now consider the speed of sound : about 1000 feet per second, so one way to delay the other signal is to move its speaker back ... 15 feet! Probably not practical, but often done for high frequency units where a group delay of (say) 0.1ms (3cm) is required.

Also notice the caveat about the same amplitude above : if two 200Hz signals arrive 180 degrees apart, but one is 10dB lower in amplitude (carries 10% of the power) cancellation occurs, but the sum has 90% of the overall power thus causing a 1dB change in amplitude : few listeners will notice. So beyond 10dB attenuation, it becomes less important to worry about phase shift.

EDIT: The fact is, you have massive delays in your passband, not just beyond your -10dB point, amounting to about 2 full cycles at 60Hz, and as Horta comments, this could be quite clearly audible in some environments. I'd want to see that plotted as group delay vs frequency. If it's relatively constant, I'd consider delaying the main channel by the same amount. (easy if the signal source is digital, not so easy if it's an analog AM or FM car radio).

Alternatively I'd start looking at linear phase filters - there's been a lot of work done on matching phase between LPF and HPF filters (such as Linkwitz-Riley for loudspeaker crossovers) which would seem to be applicable for your case. If you can use these up to say -15dB or -20dB attenuation you can safely add a filter that does anything you want (Cauer, etc) above that point.

EDIT2 : splitting the filters looks like a good idea. If you apply the 20Hz HPF filter to the entire audio band, and its group delay is constant at 15ms across the entire spectrum, that amounts to pressing "Play" 15ms later ... inaudible, and a very different situation from delaying part of the spectrum.

I recommend building it with the flexibility to try both configurations, and testing to see if you can hear the difference. You can do that with normal amplification if the Class D amp isn't ready yet.

Not the answer you're looking for? Browse other questions tagged operational-amplifier audio phase-shift or ask your own question.