is there an electrical component that exists that would act similar to a potentiometer, but could be turned either clockwise or counterclockwise past a middle point, and would either release positive or negative voltage depending on which direction past that point?

If this doesn't exist, is there a simple circuit I could create to emulate this ability? 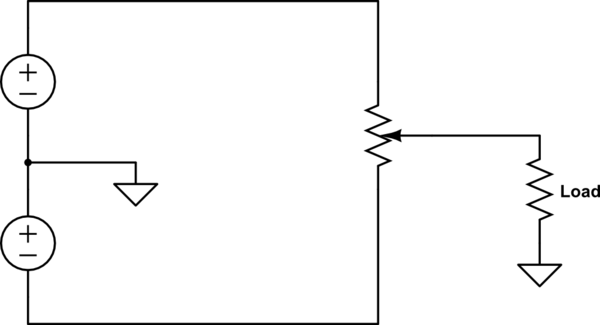 Yes, it's exactly the same circuit you've already been doing with ground in a different place.

Not the answer you're looking for? Browse other questions tagged voltage switches or ask your own question.

30
“Ground” vs. “Earth” vs. common vs. negative terminal
3
Fire pit dancing to music — increasing the voltage from a subwoofer out
0
Does electric potential influence the direction of current?
1
Help with electronic components
0
Momentary Bosch Style Relay with Changeover
2
Converting 0-5 volts (linear) to +2.5 — 0 — +2.5 volts (“vee”)
1
Why am I reading 22VDC / 69VAC when measuring between myself touching a MacBook and ground?
0
2 / 4 quadrant switches - how can current have opposite direction to voltage?
0
When does a transistor turn on
1
10K Potentiometer with Arduino Uno and 5v works but same pot with ESP32 and 3.3v floating values