I'm trying to figure out a way to optimize the power consumption of a group of two high-side switches. They are not supposed to be switched more than once every minute.

I don't know if my way to connect them is right. I have two loads (both constituted of step-down and step-up voltage regulators, electronic speed controllers, etc). The goal is to command them by manual switches. There is a pull-down resistor on each MOSFET's gate (if one of the switch has a malfunction, the loads are still working).

If the load 2 is turned off, load 1 should be automatically turned off (thanks to the diode).

Loads are between 10 and 60 amps. (The load values are for illustrative purpose) 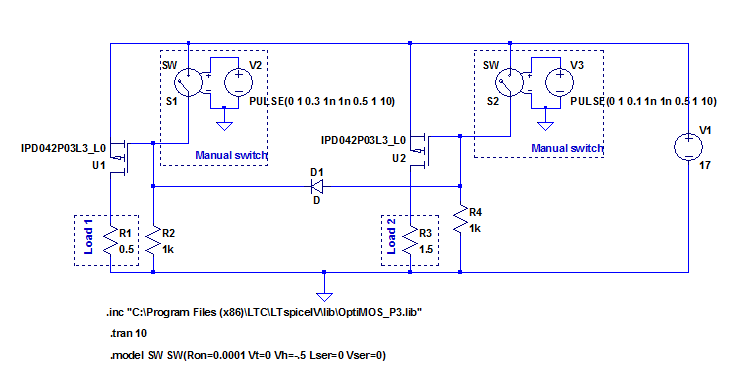 I have several questions:

Thank you in advance,

I updated the design with the P-Channel MOSFETs that Russell was talking about.

The voltage source is a 4-cell LiPo battery (voltage goes from 12.8 V to 16.8 V), I use a Zener diode to keep the minimum value of Vgs at around -10 V regardless of the voltage source.

With this design, Rds(on) should stay below 2mOhms... Power loss would be about 7 W for a maximum load of 60 Amps (load values on the schematic are for illustrative purpose only !).

Keep posting your comments on the design ! Thank you very much !

I'm thinking about another aspect of this design.

In the case the MOSFETs are turned off during a long period of time (over several months).

Since the system is powered by a battery, it may be a good idea to reduce the quiescent current to a negligeable value.

I don't think I will implement it in the first design of this board but how is it possible to reduce the quiescent current ?

Check data sheet for your FETs.

Your loss calculation has gang aglae.

First off, your choice of p-type will not make a great deal of difference in the power dissipated. The reason? The unit you've chosen has a nominal Rds(on) of .0042 ohms, and you will have a great deal of trouble making a PC board with trace resistances less than this. Handling these currents will be a challenge if you don't have any experience.

Next, your power calculation is off. Your calculation (.0042 x 60) gives you the voltage across the MOSFET when it is on. Power is this voltage times the load current, or about 15 watts. Actually, assuming your load resistances are 3:1, your worst-case current for a single MOSFET is 45 amps, and the power will be ~ 8.5 watts.

Assuming your load impedances are correct, your supply voltage is in excess of 20 volts, and your gate drive will exceed the maximum Vgs of 20 volts. This also implies that your load power is in excess of 1.2 kW. You haven't told us why you need to minimize MOSFET power. If you're worried about overall efficiency, you're really wasting your time. A MOSFET power dissipation of ~ 10 watts is less than 0.1% of your system total power.

Likewise, the power dissipated in your gate pulldown resistors is insignificant (~ .4 watts per resistor at 1 k). Increasing the resistance to 10k will drop this to .04 watts, and this is so much less than the MOSFET power dissipation that it makes no sense to worry about it.

"They are supposed to be switched more than once every minute"

If they are only being switched at such low rates, then the only thing you should worry about is Rds_on. This is always inherently higher in P-channel FETs. Try to design your circuit with low-side N-FETs which you will find have lower Rds_on values for similar package/technology/capabilities.

The main losses from using FETs as switches is the Rds_on for DC style currents, and the switching loss when they are being switched very fast, usually with PWM methods.

You are not switching often enough to worry about switching loss, and the 1K resistor is okay, but could be much lower if you wanted.

Not the answer you're looking for? Browse other questions tagged power mosfet or ask your own question.