What is race condition in flip-flops?

I've gone through two of my text books and consulted my teacher but nothing seems to clarify my doubts.

The two versions of race which I've been taught are -

Which one is right? Or, are both of them wrong, if so, what is actually race?

A race condition is a timing-related pheonomenon. A standard S-R FF (two cross-coupled NAND or NOR gates) is stable for any stable input.

But if it was 00 and both inputs changed to 1 suffiently close to each other in time, the FF can enter a metastable state, which can last significantly longer than the delay time of the gates. In this state the outputs can either slowly drift towards their final sate, or show a damped oscillation before settling on the final state. The time required to settle is unbounded, but has a distribution that quickly falls off for t >> gate-delay.

In normal operation, from 00 input, one input becomes 1, and the feedback loop in the flipflop propagates this (or rather, the remaining 0 input) through both gates, until the FF is in a stable state. When the other input also turns 1 while the propagation from the first is still taking place, that also starts to propagate, and it is anyone's guess which one will win. In some cases neither wins immediatyely, and the FF enters the metastable state.

The race condition is that, from a 00 input state, one input changes to 0, and the second one also changes to 0 before the effect of the first change has setteled. Now the effects of the two changes are 'racing' for priority.

The explanation stated is for a simple Set-Reset FF (or latch, or how you want to call it). A level-triggered circuit (I would call that a Latch) can be thought of as a RS-FF with both inputs gated by the enable input (CLK in this diagram):

In this circuit, a simulatenous 00 -> 11 transition of the hidden 'inputs' of the cross-coupled NANDS still causes a race condition. Such a transition can occur (due to the delay caused by the inverter) when the D input changes simultaenously with the CLK input changing from 1 to 0.

A real clocked (edge-triggered) memory circuit can be thought of consisting of two latches, enabled by the opposite clock levels (master-slave arrangement). Obviously the first latch is still susceptible to the same race condition.

PS googling for the appropriate pictures I got them from How 1-bit was stored in Flip flop? :) 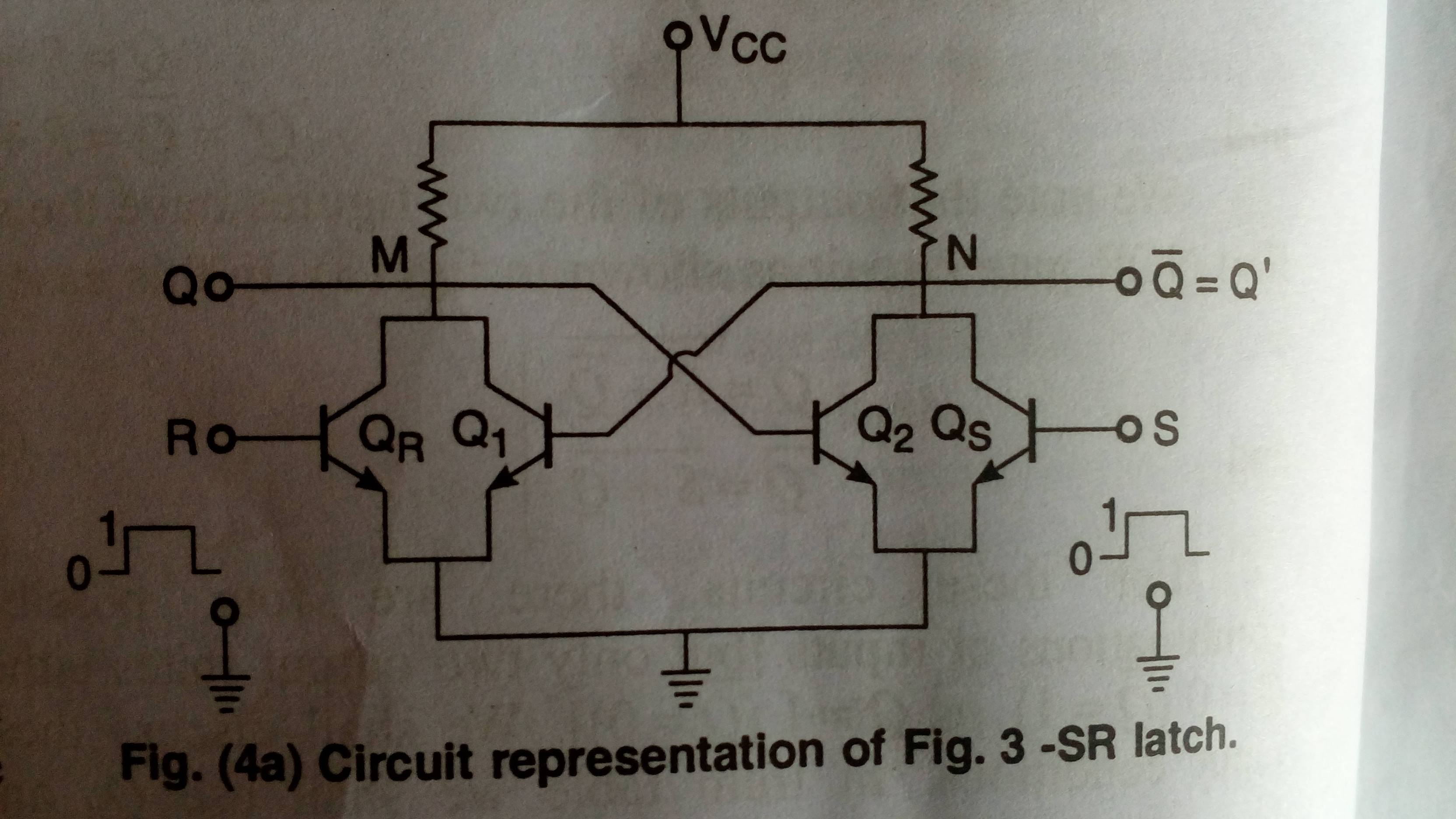 Firstly its not race around condion....don't confuse it....its Race Condition.....

When S=R=1 Q=Q'=1. Its well defined..but the problem arises when both S and R changes simultaneously to 0 from 1(high to low)

The transistors will try to come out of saturation...

Even if speeds are equal then also outputs Q and Q' will oscillate between 1 to 0 and then 0 to 1 Thus output is unstable...

Race around condition in digital circuits occur when the final state of the output depends on how the inputs arrive.

Digital circuits have inherent delays. So it is possible that one of the inputs arrive a little earlier or later than others ie the inputs which were meant to be present at the same time actually arrive at different times due to different delays along their path.

As a result of this, the output changes unpredictably. In other words, there is a race among the inputs as to which one will affect the output. Generally this takes the form of spikes, which can be both high or low. 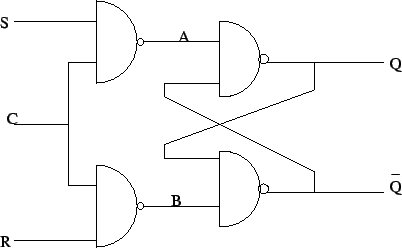 Consider what will happen if both S and R are high.

If A arrives before B , Q will change to High which will momentarily set Q' low which in turn should have ideally kept Q high and so on.

Now after a moment, B arrives ( very short duration). This will turn Q' High which in turn will set Q High.

You can check to see what happens when B arrives before A.

1) The output depends momentarily on which input arrives first. This in essence is the race condition.

I hope I am correct.

I think case 1 is appropriate. ie., When both the inputs of a SR latch is '1', then the output is unstable.

Now from S=R='1' the input is changed to S=R='0' at this condition is output is supposed to be the previous state. But previous state was unstable. So the output may lock to either '1' or '0'. You can not predict.

Whenever we provide 1 to both J and K in the JK Flip Flop, the output is supposed to complement the previous output. This is called race around condition(similar to the same concept in "operating system", where the final output depends on the sequence by which processes are executed).

To overcome this problem, we use master-slave flip flop.

Race around condition only exists in latches as they are level triggered devices and clock pulses may remain high for a period where for invalid inputs the output fluctuates indefinitely until the clock pulse is high. This is eliminated by using master slave latches (JK) or flip flops which are edge triggered devices.

61
Difference between latch and flip-flop?
7
How 1-bit was stored in Flip flop?

6
master-slave flip-flops
0
Usage of "safe" gated SR Latch?
37
How is an XOR with more than 2 inputs supposed to work?
0
Use of Toggle flip-flops and JK flip flops
1
Do any flip-flops use separate clock levels for "sample" and "propagate" events
0
Beginner trying to understand flip flops
1
SR flip-flop race condition
1
When can the output of any flip flop (e.g., JK FF) be indeterminate?
5
State Machine with D Flip Flops; how to deal with race conditions
3
Is this a good design for a 0...7 counter?