How does a vacuum tube amplifier work?

How does a triode amplifier work? I mean, how does the different components help in amplifying the source wave?

A vacuum tube is a small tube from which all the air has been removed. The first vacuum tubes had just two elements, a heater (or filament) and a plate, and were called diodes. They rectified AC to DC. The filament is heated by a small AC voltage, for example 6.3v or 12.6v, and gives off electrons which are attracted by the plate.

In 1907, De Forest invented the triode. He added a cathode which surrounded the filament. The cathode is heated by the filament and was a better source of electrons. He also added a control grid in the form of a spiral of wires or an open mesh (so the electrons can pass through) in between the cathode and plate. If the voltage applied to the control grid is lowered below that of the cathode, the amount of current from the cathode to the plate is reduced. 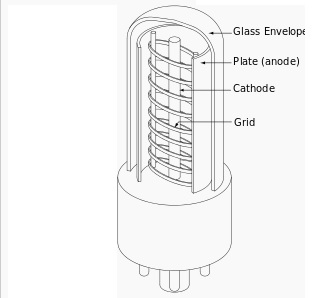 Note that this effect -- varying the output via a voltage -- is similar to how MOSFETs are controlled by varying the voltage on the gate. This is in contrast to Bipolar Junction Transistors (BJTs), which use a varying current through the base to control the output.

To make an amplifier, a large positive voltage (several hundred volts) is applied to the plate through some sort of load. Then a signal is fed into the control grid. A relatively small amount of change in the grid voltage causes a much bigger change in the voltage across the load.

In the picture below, is probably about as simple a one-tube amplifier that is possible, but it illustrates all of the basic concepts. The speaker acts as the load. 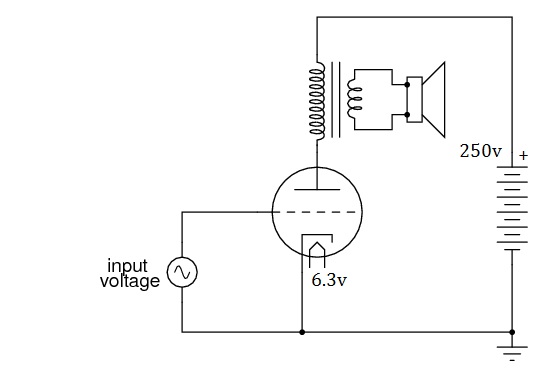 In a "real" circuit, there is usually a resistor between the cathode and ground, so the cathode voltage is biased above ground, and there would be another resistor (and/or capacitor in the input circuit leading to the grid.

Triodes worked fine for audio frequencies, but some problems arose when applied to radio frequencies (RF). In order to improve the triode, additional grids were added. First a screen grid was added in between the control grid and the plate, then a suppressor grid, until finally a five grid tube was invented called the pentagrid. It became very popular and was used in most of the AM radios manufactured from the 1940's on until transistorized radios began to replace them.

There are also vacuum tubes with two triodes in them. The filament is shared between both halves, but nothing else. They would be used in two stage amplifiers like this one. Each half of the dual triode is drawn as if it was separate, but the dotted lines indicate that the two sides belong in one envelope.

The 12AX7 is one of the most popular dual triodes ever produced and and an estimated two million per year are still being made in Russia and China (vacuum tubes are no longer manufactured in the US). The majority of new 12AX7s are used in guitar amps.

Dual triodes also played a part in early electronic computers, which had thousands of them. 6,550 out of the 18,800 tubes in the ENIAC computer (circa 1946) were 6SN7GTs. Each tube represented one bit, one side the 1, and the other side the 0. No wonder the computers filled an entire room.

A vacuum tube triode is a transconductance device; a voltage controls a current.

Essentially, within a vacuum bulb, a cathode is heated (directly or indirectly) such that electrons are 'boiled' off (thermionic emission).

Surrounding the cathode is a metal cylinder called the plate. If a battery (or DC power supply is connected across the cathode and plate (such that the plate is more positive), the electrons surround the cathode will be drawn through space to collide with the plate.

The electrons flow from the plate through the battery to the cathode and a current is established.

If a metal mesh is placed between the cathode and plate and a voltage, negative with respect to the cathode, is connected across grid and cathode, the plate current can be reduced and even shut off completely.

Now, place a resistor in series with the plate. As the plate current is varied by the applied grid-cathode voltage, the voltage across the resistor changes in proportion.

These are the basics. For more, the electrical engineering site would be more appropriate.

Finally, this rather dated US army video teaching vacuum tube operation may be helpful.