I can use 1 NPN and 1 PNP transistor. But I'm wondering if I can use 2 NPN transistors only, I have some confusion about NPN. I've been reading for long time about transistors and now this is how I can use NPN.

But can I use NPN transistor like below schematic too ?

or only PNP can do this ?

As far as the second circuit goes in the original question, using a NPN transistor as a "high-side" switch is generally not a good idea because you would have to bring the base voltage all the way up to Vdd to turn the transistor on, which would generally be a problem, for example, if Vdd is +12v and you are trying to drive it from a microcontroller output that can source only 3.3v or 5v. 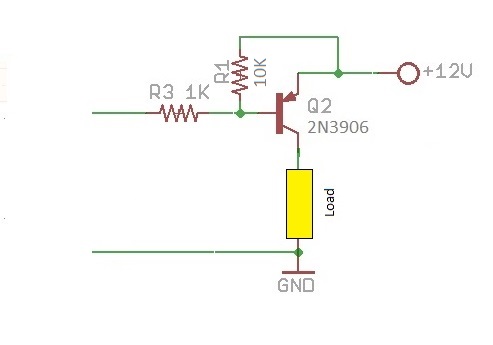 So a better scheme is to use both an NPN transistor and PNP transistor together, like this:

Basically the first circuit (named common-emitter configuration or transistor switch) is more appropriate for some reasons (smaller dissipated power, arbitrary input voltage). You have only to add a base resistor. A disadvantage is the ungrounded load.