How to combine two LED indicators (one to VCC, one to GND)

I have two seperate sub-circuits that each have an indicator LED and only one circuit will have power at a time. So far so good, however I would much prefer to have only a single indicator light.

My Problem is that one LED comes out of a 555 IC to VCC and the other comes out of the emitter pin of a 2N2222A transitor and runs to GND.

I tried adding a 2N2222A transistor to the 555 IC (Base to pin), collector to 9VCC and running the LED out of the emitter to GND. I also tried a few resistor values between the collector and the 9VCC.

The subcircuit still worked, but the indicator LED would not turn on.

Is there any simple way this can be done?

If you do not mind two transistors then the general principle implements
A OR NOT(B) at the LED Cathode.

The circuit below should work with both inputs as logic level signals with not enough drive for an LED (or with "full power" signals such as you have".)

A low turns Q1 on via R2.
R1 holds Q2 off if A is high and B is low as the base of Q2 would otherwise be floating - which is not good design practice and can lead to partial turn on of transistor due to leakage currents. Similarly Q1 may benefit from a high value resistor (say 100K ) from base to V+ IF input A is high impedance when not low to enable LED. 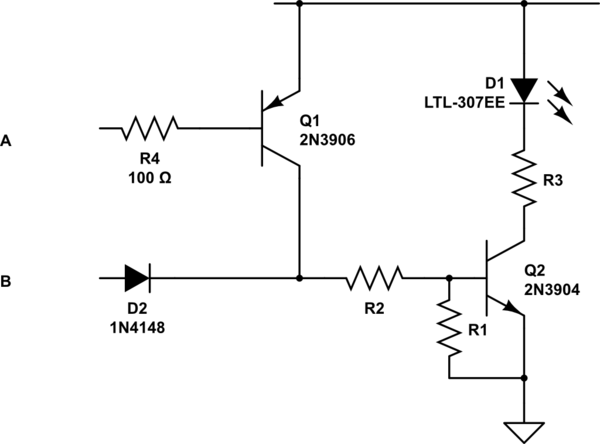 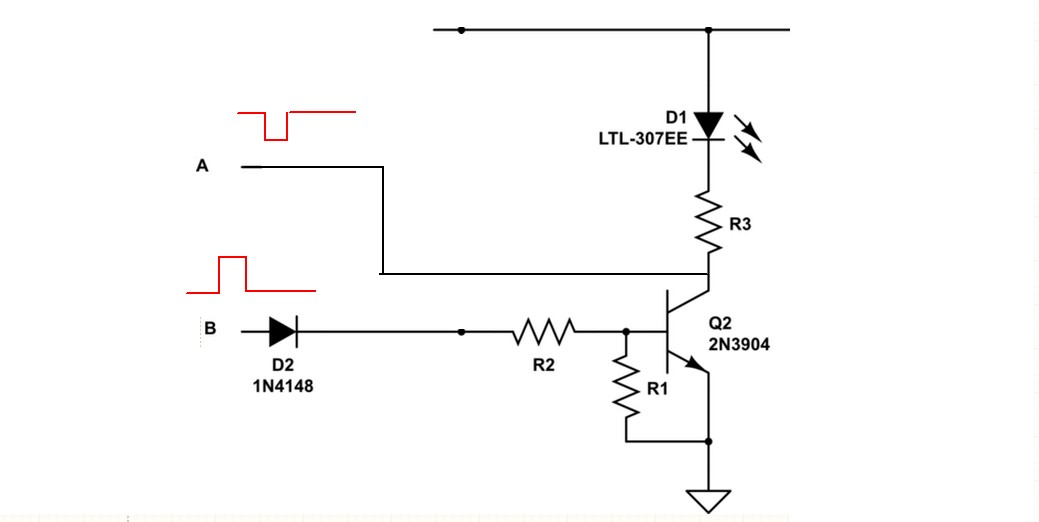 Either can be used to drive the LED directly (as now) with the other inverted to match.
eg here A could be connected to the collector of Q2 via a diode and R4 and Q1 omitted.
Thusly:

D2 may not be needed depending on impedance of B when not on.

A low and/or B high turn on LED.

Thanks for the suggestions guys

I have just solved this myself.

The first beam breaker circuit used a 555 timer and the status of alignment and sensitivty was originally shown by an LED (and 470R) between its pin 7 to 9VCC.

However I wanted the LED to run to GND to match a second beam breaker circuit's (built with only transistors) indicator LED. Then they could be amalgamated.

After much faffing around with the second circuit and getting nowhere, I had another go with the first circuit that used the 555 timer.

Not the answer you're looking for? Browse other questions tagged led indicator or ask your own question.

1
Charge indicator LED
2
Driving an LED from a uC pin with the Anode above uC's Vcc rail
1
How to turn Flashing LED into constantly glowing one
1
Arduino + PWM + LED Buck Regulator / Flashing not smooth
1
How can I indicate that an IR LED is functioning without detecting its emissions?
0
How to turn on LED with PMOD on FPGA
1
How to fully shut off an LED indicator when used with a Smart Switch?
2
One LED capable of being turned on by two IC's