I'm a biologist tracking migratory bats and need to build a bunch of antenna towers to listen for pulses from tagged bats flying nearby. These are off-grid, so we'll have 55W solar panels charging 12V 100Ah deep cycle batteries during the day, and the sensor gnomes use that battery power to listen for bats at night. I need to put a fuse between the battery and the solar controller. The first version of this system used 20A class CC fuses and a bulky fuse box meant for home solar use. Is there any reason I can't use a smaller and cheaper fuse and box, perhaps an in-line model made for car batteries? The controller is the Morningstar Sunsaver SS-6L-12V if that matters. Let me know if you need more information. Thanks!

Just to follow up on this: the project is over now without any fuse-related mishap. I deployed about 40 systems and for most of them I just used in-line auto fuse holders with 20A fuses, purchased from radio shack or auto parts stores, on the positive line between the battery and the solar controller. Occasionally fuses were blown, but rarely.

For a 12V 55W solar charger, you would need approx. 10A fuse. But please remember, my guess is based on the fact you give me and better safe than sorry. But if you find a 10A breaks too often, you can safely insert 15 or 20 A for cars also. Jst ensure you use appropriate wire gauge.

10A car fuses are fine for that. With 10A fuse you could deliver 120W before it breaks.

I guess the fuse it ment to safeguard the Solar Charger if you by accident should short the wires or swap the wires on the battery.

Sine this is outdoor equipment, this could be the reason why the expensive fuse holder is used. Bad wheather and electricity are not good friends. You can get cheap electricity boxes with rubber covered holes for sticking wires through, thus ensuring dry connections.

Good luck with your project, it sounds interesting.

Normally the fuse is sized based on the wire diameter. The idea is that the fuse will blow before the wire gets hot enough to start a fire. But there is another concern with large 12V batteries. The fault current may be extremely high. A large 12V battery can deliver maybe 500 Amps or more during a fault. A small 12V fuse may essentially explode with such high fault currents. Maybe it could even form an arc and continue to conduct current into the fault. I am not sure.

But the bottom line is that fuses typically have a maximum interrupt current rating, in addition to the normal rating for where they will "blow." The most conservative thing you could do would be to use a physically large fuse with a high interrupt rating. AFTER this fuse, you can use a normal automotive fuse with no problem, if necessary.

For boats, where fire is a major concern, the types of fuses you can use are ANL, Type T, and MRBF. These have interrupt ratings high enough (thousands of Amps) to operate (blow) without drama when you short out a large battery. Probably the easiest solution is to install an MRBF fuse holder directly on the positive battery terminal. There are 30A fuses available with the MRBF rating Then use 12 AWG wire after the fuse. Probably no additional fuses will be needed in your application, but you could put a smaller fuse after the 30A fuse, and then use smaller wire, if the smaller wire was adequate for your needs.

Here is a picture of an MRBF fuse holder and fuse. This type mounts directly on the battery terminal. This is not an endorsement of the specific product pictured. I just thought a picture would be helpful. 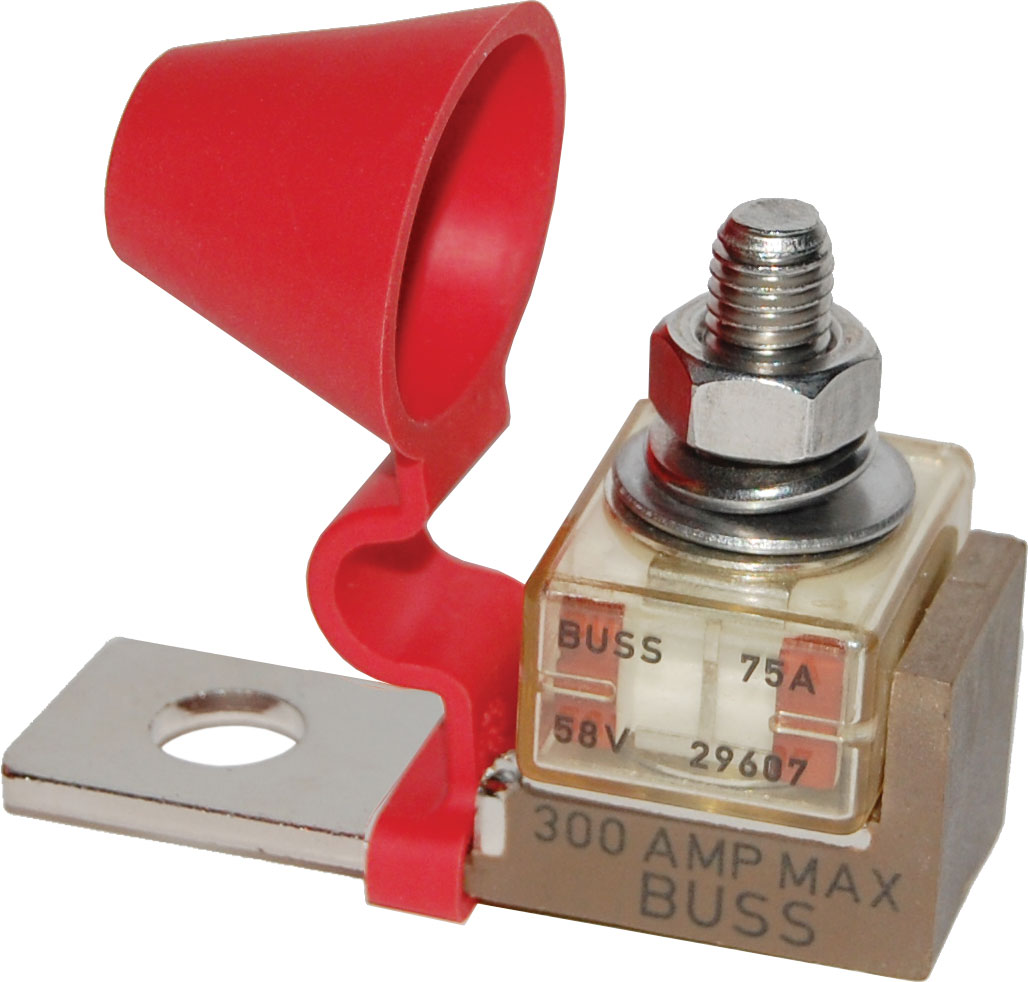 Not the answer you're looking for? Browse other questions tagged solar-cell fuses or ask your own question.