I posted a more in-depth outline of what I'm doing here, but basically I'm building this circuit (for n=3):

The circuit displays an output based on the combination of three three-input DIP switches. One LED is displayed at a time so rapidly that it looks like they're all lit simultaneously.

I've designed the transistor digit drivers to light up each display for a logic 0 and do nothing for logic 1. I have to build a multiplexer out of 7403 open-collector NAND gates. The way I understand it, the digit driver communicates to the multiplexer which three bits to activate on the bus; so there needs to be some logic implemented. I imagine that I have to construct a truth table or K-map and determine the logic based on that. But how do I determine the logic?

I believe the multiplexer should be something like this (I didn't see a symbol for open-collector NAND gates, but imagine they are with a pull-up resistor on each output): 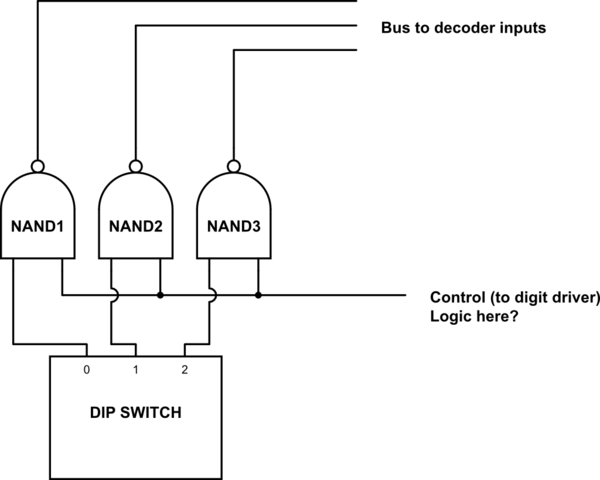 Edit: Still trying to figure this out. I think I understand how to do it with an actual multiplexer IC; For each digit, all of the corresponding bits act as inputs and the output is determined by the control/enable input. Then I could implement some logic between the digit drivers and the MUX. However, here I think the goal is to form a control tied to the NAND gate inputs for each digit and use logic to have it perform the function of a multiplexer.

Browse other questions tagged digital-logic driver multiplexer display or ask your own question.