Can 0V from an isolated source arc to earth ground?

I have a high voltage bus bar (~300-400VDC) that is powered by a variac. This sits in a case that has other electronics that are powered by a step down transformer (120VAC to 24VAC, then rectified to DC). My case is grounded to the 3rd prong of the receptacle that's fed by the wall outlet (driving the 120-24VAC transformer). 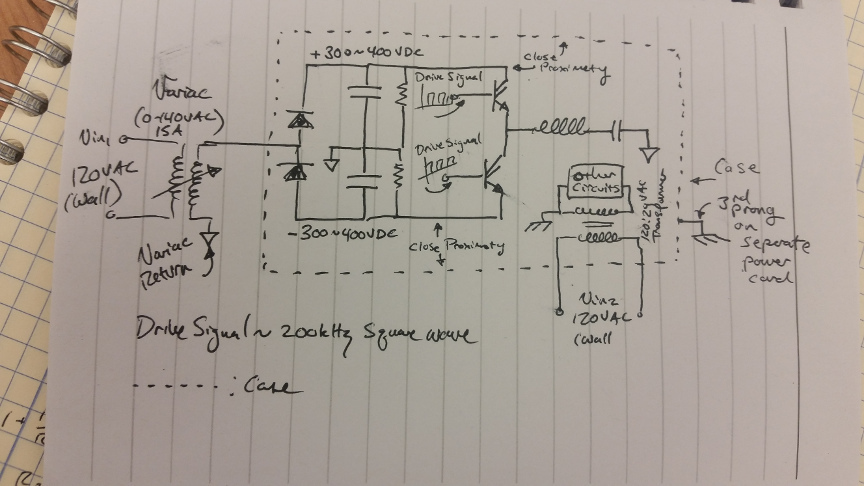 The dotted lines in the picture represent the case (an old gutted computer case, actually).

My question is, I have an LC circuit that will be ringing and temporarily getting instantaneous high spikes in voltage developed on it and some of those lines are close to the case...Since the isolated bus bars and subsequent downstream circuitry doesn't know anything about the earth ground, would it ever be enticed to arc to the case, which is earth grounded?

To be clear, here is the diagram you provided that this answer will be in reference to: 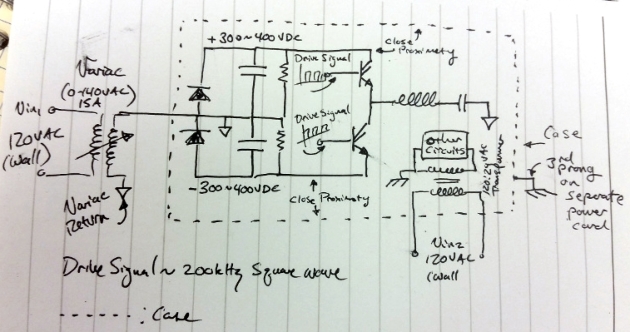 One of the big questions is the nature of the transformer at left that you say is a variac. Your drawing shows it as a regular transformer with isolated secondary. Are you really sure that is right? Most off the shelf variacs are auto-transformers, so the input and output are both referenced to one end of the single coil. What you show is certainly possible, but unlikely if you just got a off the shelf "variac" and plugged it in.

If the variac really is a auto-transformer, then you have no isolation. Both the +400 and -400 supplies will be with respect to line neutral, which is also the case ground.

Actually, that's actually not so bad at all. By having the ground of the high voltage supplies tied to the case, they can't float to arbitrary high levels, and the + and - supplies have about equal insulation requirement to the case. If the variac really does isolate, I'd actually put some bleeder resistance between the HV ground and the case just for the reasons above.

Your low voltage circuitry should also have at least some bleed resistance to the case. Otherwise it can pick up static and you don't know what voltage it might get to with respect to the case and the high voltage.

Otherwise, your voltages aren't that high. 400 V is not hard to insulate for, and doesn't take much air to withstand. Figure roughly air is good for 1 kV per mm, but don't try to cut it close. Stuff happens, things bend, dirt builds up, air gets humid, etc. Keep all HV parts a few mm at least from everything else, or make sure there is good insulation between it and other conductors. For example, it would be fine to run HV around the chassis in wires with insulation rated for 600 V, but double that if one of these wires gets close to a uninsulated node of the opposite high voltage.

Not the answer you're looking for? Browse other questions tagged high-voltage grounding isolation arc or ask your own question.