I have some questions about gas sensors:

These questions are based from the datasheet of (for example) MQ-5 Sensor: 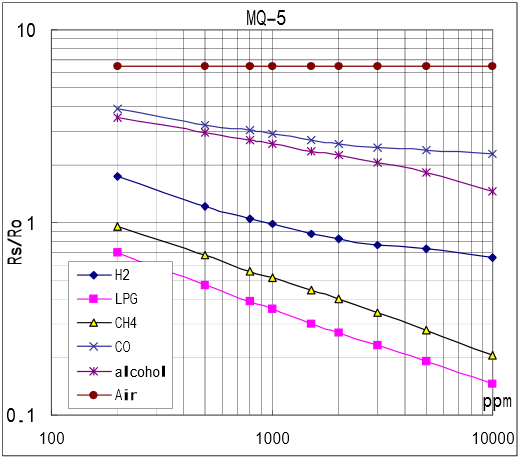 MQ-5 can detect many gases, I suppose these are laboratory measures. If there are two gases like CO and CH4, the output value will be different and if the ambience changes, I will get wrong results.

If Rs/R0 < 1, you may say that the gas is CH4, but not CO: CO will never cause such small values within the measurement range of the sensor. But you don't know what happens for very high concentrations of CO...

If you have your CO and CH4 sensitive sensor plus a pure CH4 sensor, you can distinguish between air with CO and air with CH4, but you may not be able to identify air with both gases, because you do not know how the MQ-5 deals with mixtures. Do they sum up, or do you get the signal of the "strongest" gas only?

You definitively need sensors giving you signals sensitive to the one gas, but not the other and vice versa.

That particular sensor cannot distinguish between individual gases, in fact it's very bad at doing that. That sensor is also sensitive to temperature and humidity fluctuations. If you want high selectivity for particular compounds, you will want to investigate other gas sensing technologies such as gas pellistor, electrochemical (EC), PID, etc. EC sensors in particular can give you good specificity for certain target analytes like CO, NO2, SO2, etc. But you would need a discrete sensor for each target compound.

There are many challenges with a sensor like the MQ-5. First of all, you typically need to calibrate the sensor by exposing it to a known concentration of your target analyte (gas) and measuring the voltage / ADC reading. Second, those types of sensors usually have non-linear response to the gas concentration, therefore developing a calibration function is difficult (and you need to characterize the sensor's response to different levels of gas concentration iteratively to develop an algorithm). There are many ways to do this, but that can be an expensive and time consuming process. What compounds the problem is that different sensors typically exhibit different responses to the same gas concentrations between batches or even two sensors from the same batch. The sensors are also sensitive to temperature, relative humidity and other contaminants which can skew the readings. These sensors can be useful for generally detecting the presence of the analyte (gas), but typically aren't very useful or accurate when estimating PPM within a reasonable error margin. There are also many variables to control with that sensor such as the heater voltage, heating pulse duration, load resistance, etc. These sensors have MANY cross sensitivities and responses to other analytes (other than CH4 as you have already noted). They also typically exhibit long term drift and need to be re-calibrated periodically.

You can implement an on board temperature and relative humidity sensor to compensate for these changes, but you would likely need to develop your own T+RH compensation algorithms. If you wanted to eliminate one cross sensitivity, as you pointed out, you could have an on board CO sensor and potentially compensate for CO cross sensitivities, but it's better to start out with good selectivity to your target analyte by choosing the appropriate sensor technology based upon sensitivity, repeatability, cross sensitivity and t+rh immunity requirements. CH4 in particular is a bit tricky.

Not the answer you're looking for? Browse other questions tagged sensor gas or ask your own question.