Why does electricity have a phase?

Anyone who's seen the j in electrical formulas knows that electricity has a phase component as well as a magnitude. But where does the phase come from? Does it only happen in A/C?

Edit: In other words, why is electrical power transmitted as a (sum of phase-shifted sine) wave(s)?

Edit 2: If I were pushing a cart, there would be something like a phase as my legs don't deliver equal power from every position. (But let's assume I push completely the same from a given position.) So there the difference in power delivered from various stances causes phase. But what's the mechanism that causes this in electrical power?

Your second edit makes it sound like you're asking about the mechanism behind the phase shift. That is simple: It's designed with three separate windings. This picture is a simplistic representation, and honestly there is more than one way to generate 3 phase power, but these coils are staggered 120 degrees and therefore the current induced by the magnet will be staggered in phase as well.

You could very well generate three phase power (not mains power, but 3 phase power to a motor, for example) with some sort of DAC setup but I think you're talking about what I've linked below.

This website has a neat flash animation that might help clarify the image I've attached at the bottom. http://www.launc.tased.edu.au/online/sciences/physics/3phase/threeph.htm 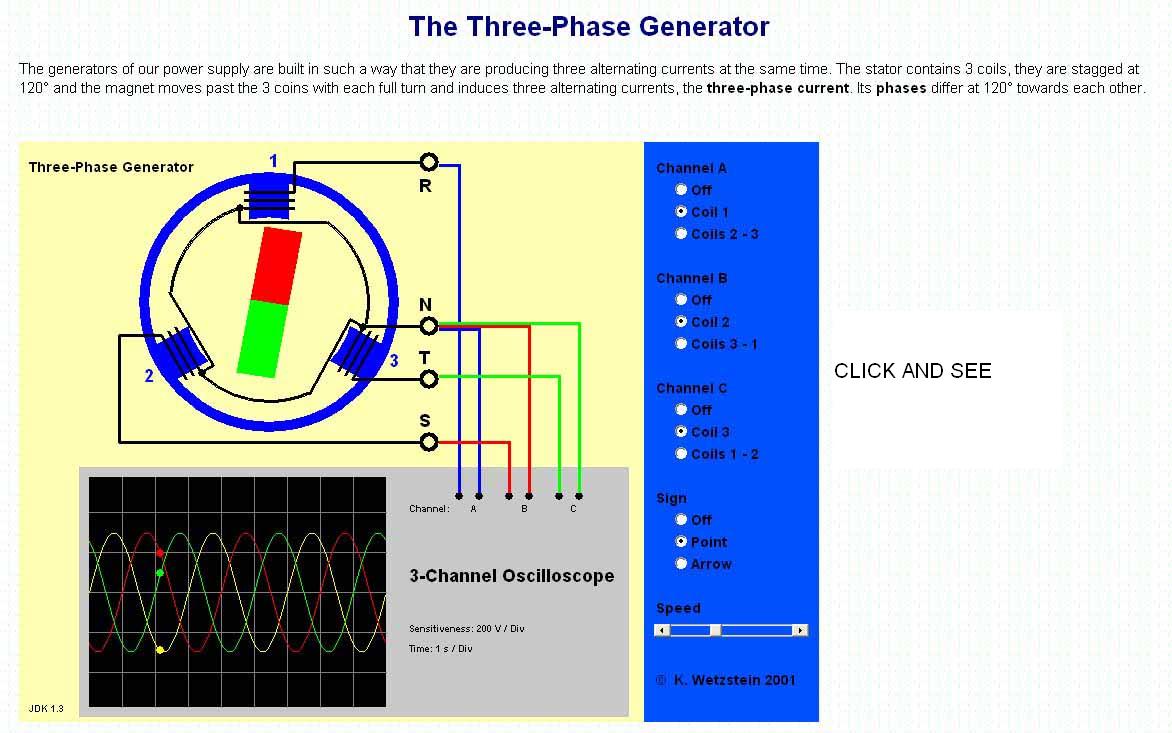 Phase is a difference in time between signals that have the same frequency.

Here is a picture of three sine waves:

If you looked at one of A, B, or C at a time without a well-defined starting point, you couldn't tell the difference between them. The only reason why they're different is because they get back to their 'starting point' at different times.

This isn't exclusive to sine waves - you can talk about phase for any periodic signal. Note, however, that every periodic signal is a sum of sine waves, so you're really just talking about the phase of the fundamental.

Phase is just a way of describing time differences in periodic signals and events. Remember that, from a mathematical standpoint, a true periodic signal is eternal:

If you have two (ideal) sinusoidal signals, it doesn't make sense to say that one happens before or after the other. Neither of them really "happens" at all -- they're not distinct events, they're spread out over all time. This is most obvious in a Fourier series, where there's no time variable at all, yet the signal is still completely defined.

Since absolute time is meaningless for periodic signals, the only thing that matters is relative time between two signals, which we call phase. But a relative time longer than the period doesn't really make sense, since \$\Delta t \pm T = \Delta t\$. So the relative time has to be a number between zero and the period, regardless of what the period is. Instead of messing around with physical units of time, it's more convenient to measure time in fractions of a period. For various historical and mathematical reasons, we've settled on two common fractions:

So why is this useful? In electricity, it often happens that we have a power source that produces a sinusoidal voltage. Sinusoids are related to rotation, so you can get them from a generator rotating at a constant speed, for instance. Phase comes in in two places:

In communications, sinusoidal signals are used as carriers to allow multiple signals to be transmitted over the same medium at the same time. When working with such signals, it's often necessary to talk about phase, as in #1 above.

Mathematically, a lot of things can be described using the Fourier transform, which represents a signal as a sum of sinusoids at different frequencies, each with its own amplitude and phase. This is helpful because things like electrical circuits respond differently to different frequencies.

(Of course, no signal or process is really perfectly, eternally periodic. But ideal periodicity is a very useful mathematical approximation.)

The complex notation is a compact way to represent sinusoidal signals, i.e. voltages and currents, changing in time in a way that can be described by sine waves of the form \$V(t)=A\cdot \sin(\omega t+\phi)\$, where \$A\$ is an amplitude, \$\omega\$ is the angular frequency and \$\phi\$ is the phase. So, as you can see two different signals which are even the same frequency can differ by phase, so it is needed to have the representation of the signal to be complete.

I think single electrical signals don't have a phase. But - if we have more signals, or reference (such as time from, for example, time counter), phase is a gauge of relativity. It's used to describe offset between signals and what effects this offset will cause. It's like a car - if you know position - it's not enough. You need for example to know the speed to describe how this car is behaving. But this is my personal consideration.

Electric power is generated by a magnet spinning past a coil over and over. The output oscillates because the magnet generates more power when it's closer to the coil and less when it's farther away.

Not the answer you're looking for? Browse other questions tagged ac dc or ask your own question.

13
Why are the power transmission/distribution systems AC and not DC?

2
How does electricity represent sound?
1
Why does the original Nintendo take 9V AC instead of 9V DC?
1
Faraday cage with a RF WIFI router inside - does the electricity "evaporate"?
2
Unity Gain Phase Splitter- Why outputs have different voltages
6
How does residential electricity work?
3
Why does wire not have large capacitive reactance?