How does the circuitry work in the Symet robot?

I ordered this Symet robot kit and it only includes instructions on how to build the thing instead of actually teaching you exactly why and how it works. I even ordered this book that walks you through how to create it again but again does not teach anything about how the circuitry works. So stinkin' lame!

The "robot" works very simply, storing some power in the larger capacitors then releasing it to the robot, turning the motor in bursts. My question is, how is this circuitry working? How are the two (and three) transistors working to make this happen? Also, what are the big differences between the two and why is one better than the other? Any and all details of how this is precisely working would help me tremendously! 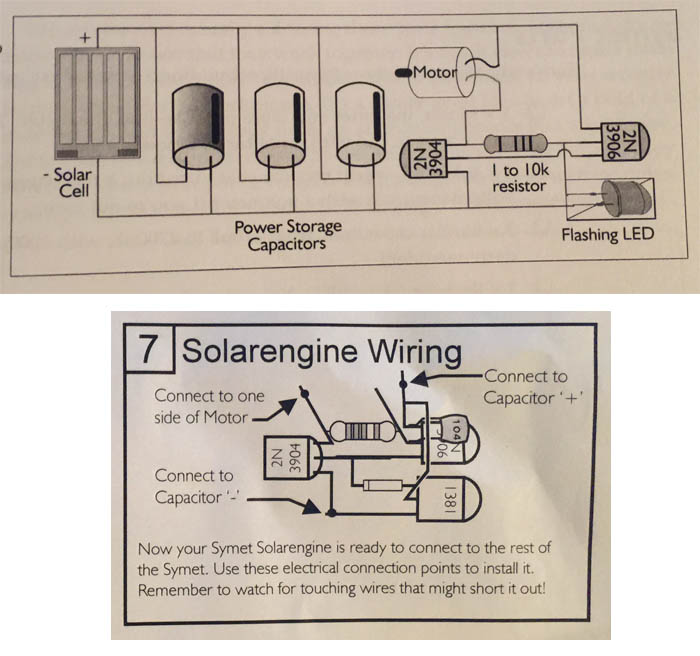 I agree with your observation that simply giving instructions on how to connect circuit components together with no further explanation does not help understanding how the circuit works. And I applaud your effort to learn the why and how.

My answer is going to focus on the first circuit because, honestly, I couldn't find any information on a "1381" transistor. Are you sure it's a transistor and not something else?

Let's start from the end (making the motor turn) and work our way backwards. In order for the motor to turn on, current will have to flow through the motor. If you look at the schematic above, there are two current paths through the motor: one is straight down through Q1. The other goes through R1 and the LED. Presumably, the 1k-10k resistance of R1 will prevent any substantial current to flow in that path, so it won't generate enough electromagnetic energy to physically rotate the motor. Therefore, the only realistic current path to rotate the motor is through Q1.

Q1 is a NPN transistor, so a positive voltage must be applied to its base pin to turn on the transistor (typically, that voltage is ~0.7V). The base of Q1 is connected to the collector of Q2, so Q2 controls whether Q1 can turn on.

Q2 is a PNP transistor. In order for a PNP transistor to turn on, there must be a path for current to flow into its emitter and out of its base. Looking at the schematic, current can flow into the emitter of Q2, out the base, and through the diode. When this happens, the LED will light up, current will flow from the emitter to the collector of Q2, Q1 will turn on, and the motor will rotate.

So ultimately, the blinking LED is controlling when Q2 is turning on and off. Q2, in turn, controls when Q1 is turned on and off. And Q1 controls when the motor energized or not. So when the LED blinks off, so does everything else.

The capacitors are there to collect and store the energy from the solar panel over time. This is because, presumably, the solar panel isn't large enough to directly run the motor by itself.

*Strictly speaking electrons flow from the negative potential to the positive, but electrical engineers don't like to think that way ;).

A VERY crude and simple design - BUT, if it does the job intended and the price is OK then good luck to it.

2N3904: When transistor is on top and bottom leads (Collector and emitter) are electrically joined and current flows from capacitors via motor and transistor.
2N3906: When this is on it turns the 2N2=3904 on via its middle control lead = Base.
The resistors pulls the 2N3906 base high and turns it off.
When voltage is applied to the flashing leg it flashes - fancy that :-).
When the LED tuns on it pulls the 3906 base low and turns it on which turns the 3904 on which drives the motor.
When the LED turns off the motor turns off.

THey call the 1381 a "trigger diode".
It's "usual" name is a reset generator or voltage monitor (or similar). Its usual use is as a low or high voltage warning monitor but it is well used here. The 1381 produces a high output level on pin 1 when the voltage between pins 2 & 3 exceeds a preset voltage - and it removes the output when the input differential has fallen by a certain amount. Here the IC "turns on" when the capacitors (and so its trigger input) reach a certain voltage and turns off when the capacitors voltage has fallen by a set amount.
They use a 1381E. The E specifies turn on of 2.2 to 2.4 V and turn off when Vcap has fallen by between 50mV and 300mV. The large ranges mean that different robots will "pulse on" for different periods - but all will probably work well enough.

Operation of the 3 "transistor" circuit is similar to the 2 traansistor BUT the 1381 is used to turn the 3906 on when the input voltage is high - y when the solar panel has charged the capacitors to 2.2 to 2.4V and off again when the voltage falls 50 to 300 mV.

When B is at E potential the transistor is off.

As B is moved towards C potential the transistor turns on when Vbe is ABOUT 0.6V.

Not the answer you're looking for? Browse other questions tagged transistors capacitor or ask your own question.

3
Replacing LED with Flashing LED in a circuit

6
Troubleshooting Circuit (Make: Electronics Experiment 11)
16
How does this mosquito zapper circuit work?
1
Why does 3-to-5 volt with transistor not work the way it should?
5
How does this transistor dual LED flasher circuit work?
3
Silicon Controlled Switches SCS equivalent circuit with transistors not working
1
Need help understanding PNP Base into NPN Collecter circuit for LED Array
0
What resistors do I need for a simple LDR triggered h-bridge?
0
How to isolate sensor power and ground lines as simply as possible