How do diodes and capacitors reduce Crossover distortion?

I found this diagram about Class AB Amplifiers and the reduction of crossover distortion: 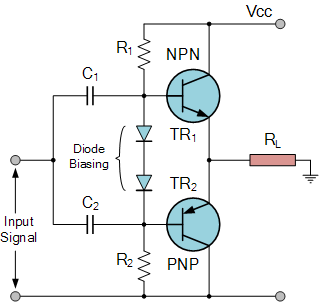 This pre-biasing voltage either for a transformer or transformerless amplifier circuit, has the effect of moving the amplifiers Q-point past the original cut-off point thus allowing each transistor to operate within its active region for slightly more than half or 180° of each half cycle. In other words 180° + Bias. The amount of diode biasing voltage present at the base terminal of the transistor can be increased in multiples by adding additional diodes in series. This then produces an amplifier circuit commonly called a Class AB Amplifier and its biasing arrangement is given below.

I don't understand the explanation of how the diodes and the capacitors reduce the Crossover distortion. Each transistor (npn and pnp) should cover 180 degrees a sine, why doesn't 180 + bias remove the complete distortion, what have the capacitors and diodes to do with this? I read about the diodes compensating for the transistor voltage drop of twice 2× 0.6V How does this exactly work? How does the capacitor smooth the signal?

Cross over distortion of a class B amplifier: -

The top half of the waveform comes from TR1 conducting and the bottom half from TR2 conducting. At some point a class B amplifier changes from using the top transistor to the bottom transistor. When this happens there is insufficient voltage across base/emitter to activate either transistor hence there is a dead zone: -

The diodes turn a class B design into a class AB. Now, neither transistor is fully off therefore the dead zone is no more.

The capacitors are incidental - they allow the input signal to couple to both bases without the new biasing arrangement being affected.

This means there is a input dead zone of two B-E drops where the output won't change. If you put a sine wave into the input, the output will be the sine waves with each of the wave halves one B-E drop less in amplitude, with a flat spot where the input transitions between driving one transistor to the other. This flat spot is crossover distortion. It happens due to the circuit being non-linear when it is "crossing over" between using the top the transistor to drive the output to using the bottom, or vice-versa.

The diodes add a offset to the input voltage for the purpose of driving each transistor. The B-E junction of a transistor looks like a diode to the circuit, and will have about the same voltage across it as a diode when forward biased. In this case, the diodes are used a shunt-regulator voltage sources to offset the B-E voltages of the transistor. They are not used as rectifiers, which is probably causing the confusion.

Without the diodes, when the input is between +0.6 and -0.6V, the transistors will be off (not enough Vbe on transistors) resulting in a 0V output causing the crossover distortion.

The added diodes bias the Q point voltage for the circuit, allowing the transistors to be on when the input voltage is between the -0.6 +0.6V region hence resolving the crossover distortion issue.

The original site's explanation is dubious in that the capacitor coupled input is not a typical hookup. (OK, maybe one cap but not two. Also they show the load is grounded yet the input is neg rail referred) They show an IV curve and load line, and this is what you learn in school. But I would have shown a 2nd drawing, one that adds the VAS (voltage amplification stage) with the biasing diodes. Typically this stage provides part of the voltage amplification but more importantly is directly coupled to the final "follower" output stage. The VAS stage does 2 things: amplification and DC bias the output transistors. Think of the diodes as a battery voltage. If current flows thru the diodes, say, 5mA, then a deltaV is created for the two output transistors, ~1.4V. To vary the bias voltage, series resistor is typically used (tens of ohms). There's actually a third and very important aspect the diodes bring to the table - temperature compensation. The output NPN/PNP will dissipate lots of heat if they do a lot of work. Just a few watts of power will create a temp rise in the transistors. Bipolar devices are known for their thermal runaway properties, and the diodes bias voltage will decrease at elevated temps, therefore compensating the temperature characteristics of the output devices. The diodes need to be in thermal contact with the outputs to sense the temperature of the outputs. Otherwise the outputs will self destruct, as they will continue to heat up the required Vbe voltage goes lower and turns on harder until the package SOA is exceeded.

If you have the ability to run a SPICE simulation, and probe not only voltages but CURRENTS as well, it will all become clear. You will see that as the bias goes from not enough (ClassB) to just enough (ClassAB) to arguably too much (ClassA), the NPN and PNP alternate the work load. When the output signal goes high, the NPN does all the work, when low, the PNP does all the work (ClassAB or B). If you probe the diodes deltaV, you will see a constant voltage (with small AC due to finite impedance of the diodes).

Not the answer you're looking for? Browse other questions tagged amplifier distortion or ask your own question.

3
How is the gain controlled in a class B/AB amplifier?
0
Bias-setting on valve amplifier with dual negative bias supplies
1
Soft diode clipping for 'controlling' amplifier levels and avoiding harsh distortion
3
Crossover Distortion
7
What is the easiest way to reduce quiescent current in a AB power amp?
4
How can I minimise the power consumption of this crossover clipping circuit?
4
Presence of Crossover Distortion in Class A Amplifier
1
In a class C amplifier, how does RB biases the base of transistor?
6
Is it possible to reduce distortion in a common emitter amplifier?