I am attempting to simulate a specific chain of proteins in a cell using logic gates - specifically, I seek to construct a representation of the RTK-Ras-MAPK-pathway. In this pathway, there is a protein called Ras, which is important for regulating cellular proliferation, specialization and self-destruction.

Ras is interesting because it functions like a switch: it can be either on or off. When Ras is activated, it stays active for a short time and then automatically falls back to its off-state by intrinsic mechanisms.

I have read enough about logic gates to know that a gate cannot simply feed back into itself. What I would ideally like to do is something like below:

However, I've understood from several sources that this isn't feasible, and that connecting a gate to itself like this would create something of a "paradox"?

I've thought about using switch-controlled inputs from additional voltage sources as the second input for Ras (the XOR gate), but it seems to hinge on the fact that input 2 is undetermined until a signal comes from the XOR gate, and that the signal cannot be determined until the XOR gate gives some logical output.

My question is this: would it be possible to design a logic circuit that can take input from itself? If it isn't possible, are there ways to achieve similar results using other means?

Please note that I am not fluent in the language of electronics. If I have misunderstood something or am unclear I apologize.

It sounds like you want something more along the lines of a monostable multivibrator. For example, the 74HC123. This device produces a pulse of a set length when it receives an input.

The internal schematic for 1/2 the device (it's a dual) is shown here: 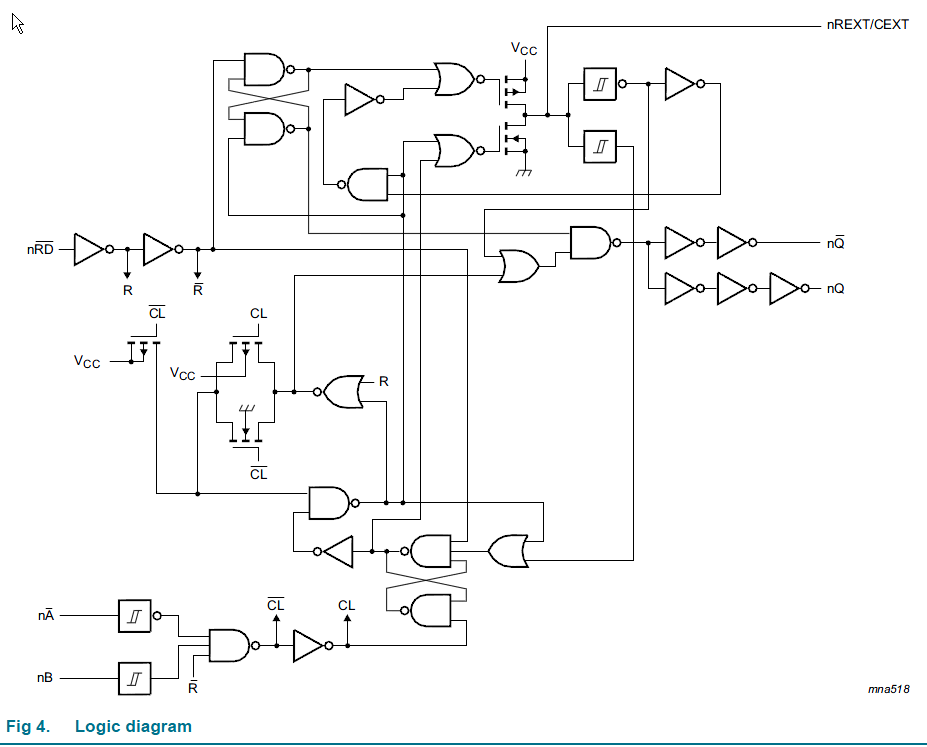 You can see that there are internal feedback paths (the cross-coupled NAND gates) that allow it to retain states while the external RC circuit operates.

You can treat this as a black box with this behavior:

I think the circuit you're specifically looking for is called a monostable multivibrator, colloquially referred to as a "one-shot". An example of this is the 74HC4358. In operation, when it gets a transient on an input, the output switches from one state to the other for a predetermined length of time, then returns to its original state. Is this what you're looking for?

If so, be aware that there are two varieties of one-shot: retriggerable on non-retriggerable. The retriggerable type (such as the 74HC4358) can accept a trigger condition while the ouput is in its temporary state, and the temporary state is extended by the nominal duration. That is, if it has a nominal 1 msec output time, and a second trigger condition occurs after 0.5 msec, the total output pulse is 1.5 msec. If this is a problem for you, it is possible to manipulate the logic to eliminate the retriggerable capability, but I doubt you need to hear about that now.

As to your more general question, direct feedback of an output to an input can have a variety of results.

a) Complete inhibition of function. Take a 2-input AND gate, and feed the output back to one of the inputs. If the other input is low, the output must be low (because BOTH inputs are not high). If the input then goes high, the output stays low for the same reason. So the gate cannot respond to any input.

c) Oscillation. This is the "paradox" state you're thinking about. Take an inverter, and feed the output back to the input. There is no actual paradox here, because it takes a finite length of time (called the propagation delay) for the output to respond to the input. So what will happen is that if the input starts off low, after one propagation delay the output will go high, then after another delay it will go low again, ad infinitum. For real logic, it's important to keep in mind that the outputs are not infinitely strong. If you were to force the input low (with a big fat switch, for instance), it's always possible to do so in a way that the nominally high output cannot overcome.

Not the answer you're looking for? Browse other questions tagged feedback logic-gates or ask your own question.

1
Build AND logic gate with 74'00 ICs (NAND) in negative logic
0
Trouble finding the proper gate
0
How to connect buttons to gates with status LEDs?
1
connecting logic gates
0
Analog logic circuit with adjustable threshold
0
How to find out if a binary number is zero or not using logic gates?
0
Rise time different from fall time; relationship differs between AND and XOR gates
3
Limiting logic gates input current with serial resistors reading their electrical characteristics
8
Is is possible to create modular logic gates from transistors for teaching purposes?