Basically, I want a minimalistic pulse generator. I guess I've always like the idea of Avalanche Breakdown to do this. I was trying to do this by using 2N2222's in reverse breakdown mode, link here, but I was largely disappointed with the non-steep turn ons. By that I mean, as the capacitor charges, the load (the LED) already gets a voltage difference. I wanted a steep turn on, as if a mechanical switch has been flicked or a hi-edge square wave from a 555 or something like that.

So now, I've fallen back to using Avalanche Diodes instead of avalanching transistors. I know that Zeners rated at 5.5V and up are generally Avalanche Diodes, so i went for them (using a 1N4735 that I have (@ 6.2V), but below I'm using a 1N4736 (@ 6.8V)). There was a marked improvement. It's almost like the 1N4735 has to have 1/2 of it's rated voltage before there was any difference in the load (R3 + D2), which grew as the capacitor charged to full.

My initial mod is as shown below and I've tried several other variations, but all it does is a delayed turn on and stays that way. Even the turn on is not very steep (grew as the capacitor charged to full). I could only guess that the current from the source dropped by R1 is feeding the load, which means the capacitor has not been fully discharged to allow cutoff to the Avalanche diode. Or, perhaps, the Avalanche Diode's cutoff current is very low, so it's keeping the transistor conducting. I'm not really sure.

I then noticed that there are TVS Diodes that can avalanche at relatively low voltages (3V or so), much lower than the normal Avalanche Diode's 5.5V, labeled as Zeners. I also hope it avalanches steeply. I'm also hoping the "Reverse Standoff Voltage" parameter will act as an effective cutoff when the voltage falls a certain level...

Or maybe there is just a fundamental mistake in my mod?? 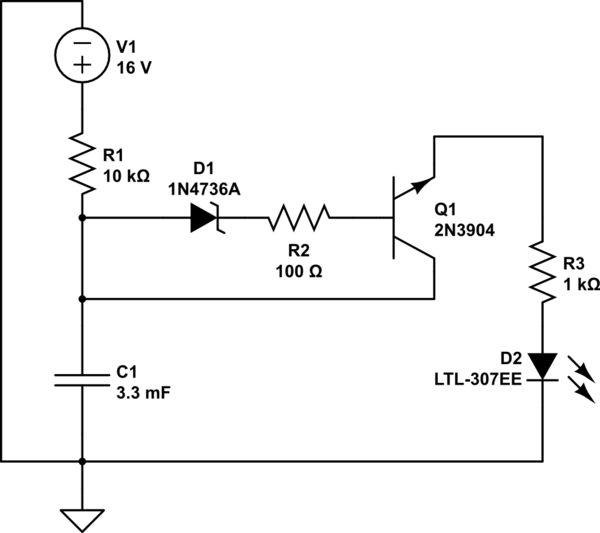 EDIT: As mentioned below, the diagram above is wrong. The Avalanche Diode is supposed to be in reverse bias.

Just for grins, here's a 555 astable with a duty cycle variable from about 1% to 99%, and if you choose to build it, C2 should be hooked directly across pins 1 and 8. 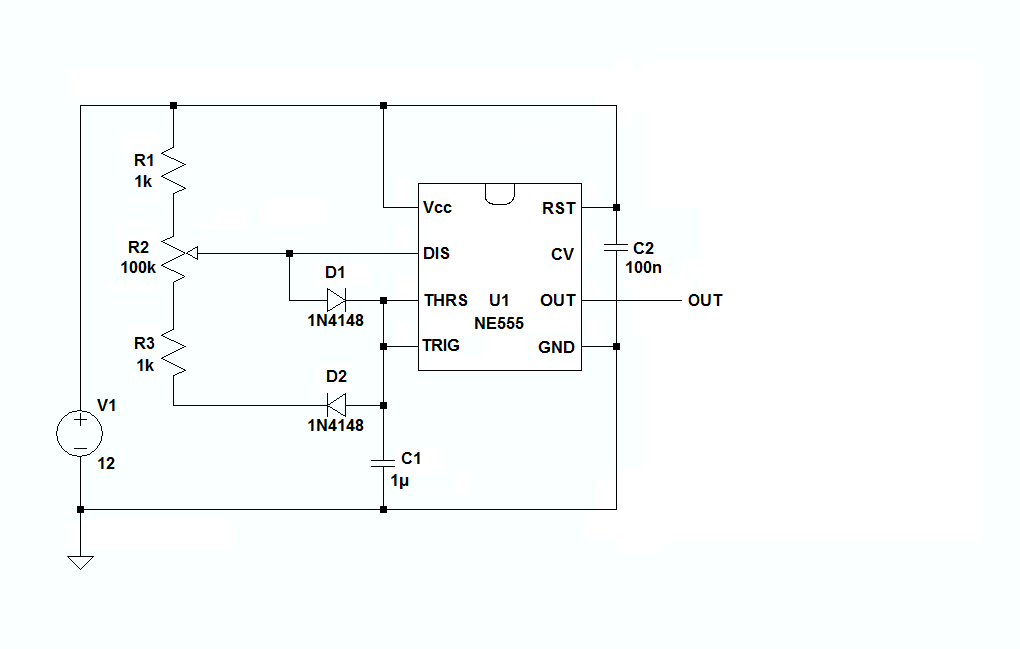 Your Zener is not connected as a Zener, but as a regular boring diode. The avalanche effect, or the Zener action, occurs when you reverse bias the diode. R2 protects the diode from damage from excessive current, and can be removed in this circuit as R3 conducts about 1mA/V, and it won't ever conduct more than 15mA.

I'd start as follows: 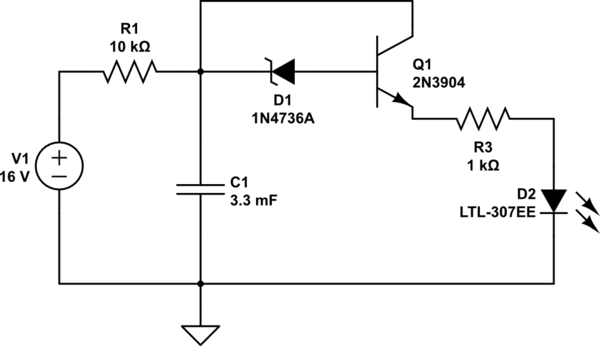 You can certainly use the 2N2222 transistor directly - you just need to select them for the avalanche breakdown. It's a common thing - you are, after all, depending on an aspect of their operation that is not the part of a normal production testing and the design isn't optimized to produce such effect reliably. 2N2222 pulsers work great - you just have to get a hundred transistors, 10 from each source, and check them out. You'll then identify what vendors and what parts produce the effect most reliably, then buy from them, and still qualify each part in a simple test rig (your circuit with a receptacle where you can plug the transistor - or on a solderless breadboard).

Not the answer you're looking for? Browse other questions tagged diodes generator pulse tvs or ask your own question.

24
Differences between TVS diode and Zener diodes, in diagrams and in practice?
1
How these two diodes used in the ciruit protect from the voltage spikes?
0
Bulk current injection - Resonant frequency of ESD protection diode CAN bus
6
How to protect input against both ESD and reverse polarity?
6
How to choose the correct TVS diode and how to size it?
0
Communication Line Protection